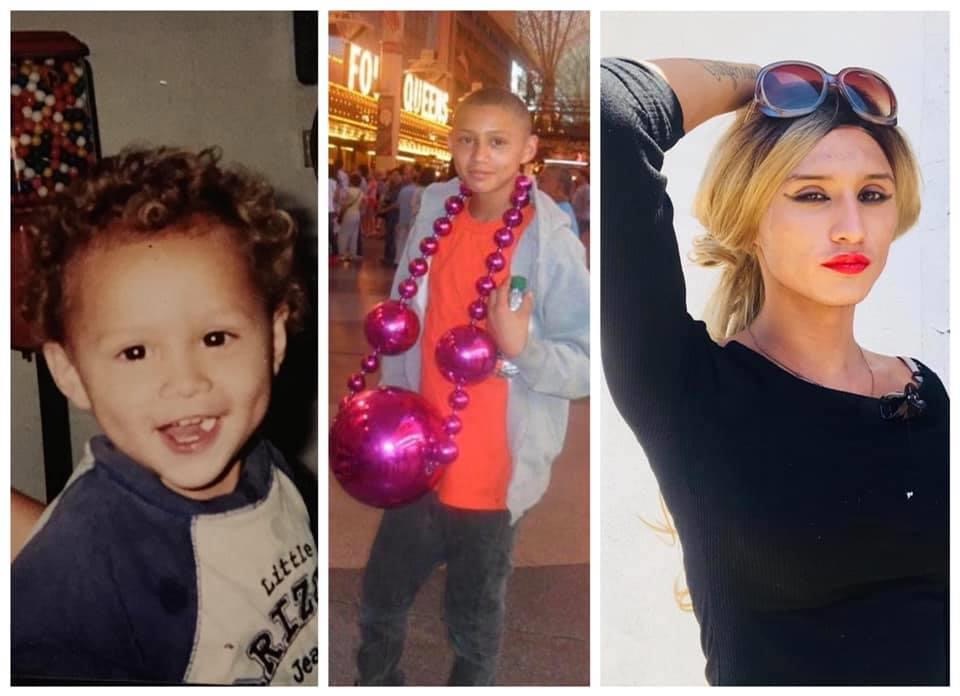 A photo collage provided by the aunt of Nathan Daniel Cazares shows the Westmorland resident at different ages, including (first two frames from left) Nathan as a child and later living as a transgender woman who went by Marilyn. The 22-year-old Cazares was the apparent victim of a homicide that family members believe was a hate crime. Brawley police have still not confirmed that the death is being listed as a homicide, but family said police told them Cazares was stabbed and burned in Brawley on July 13. | PHOTO COURTESY OF MINDY GARCIA
Home
Regional News
In Regional News

Family Says Transgender Woman Was Victim of a Homicide, Hate Crime in Brawley

BRAWLEY — Brawley police are investigating the death of Nathan Daniel Cazares, 22, of Westmorland as a possible homicide after the remains were found stabbed and burned on a couch near an abandoned single-family home in Brawley on July 13.

The victim’s family, who said Cazares was a transgender woman, said they believe Cazares was the victim of a hate crime because of the brutal nature of the killing.

Brawley police and fire departments responded to a report of a fire near the 1100 block of Main Street about 8:30 a.m., according to a press release from the Brawley Police Department.

The cause of death is still under investigation by police, according to the release, although members of the victim’s family said police told them Cazares was stabbed and burned.

Cazares was a transgender woman, her aunt, Mindy Garcia, told the Calexico Chronicle. If the murder is determined to be due to the victim’s gender, the crime could be prosecuted as a hate crime and turned over to federal authorities.

“Because this is a fairly new case, we are currently still gathering information and working through the details. If our investigation does turn out that this is a hate crime, we will take the proper steps to deal with that,” Brawley police Cmdr. Brett Houser said in a July 14 phone call when asked if this was being investigated as a hate crime.

The short Brawley Police Department press release makes no mention of the manner of death nor does it mention any motives or suspects.

“The police told our family that Nathan had been stabbed,” Garcia said in a July 14 phone interview. “The way they murdered him, the way they did it is hateful. It was overkill.”

The morning of July 14, Garcia went to the scene of the crime behind a Chinese food restaurant on the east side of Brawley, where a neighbor told her the fire started in the early hours.

Garcia said she and her family wishes to have Nathan, who went by the name Marilyn, referred to by the gender pronoun “she.” However, in the interest of clarity, the Calexico Chronicle is noting that while the family collectively is asking for the media and the public to use the pronoun “she,” family members interviewed are continuing to use the pronoun “he” when referring to Nathan.

“Nate was a character. She had humor, she loved to sing. How can you know all the lyrics to Nikki Minaj and Cardi B.? Her motto was no matter what is going on in society, you gotta be beautiful and you have to strut it. Nobody deserves that, especially him,” said Garcia.

“Nathan was a goofball. He always wore bright neon colors, skinny jeans and always made sure his Afro’s curls were tight. He always had a crinkle in his nose every time he laughed. He had a wide smile. He was just so sassy, outstanding, and very flirtatious,” said Aubrey Cazares, the victim’s sister.

“He was just Nathan. He was very tough, but he was very strong. His punch felt like 200 pounds. He was always feminine ever since we were little, putting on my mom’s lipstick and her dresses. He would play with my dolls. He was my best friend and worst enemies at times,” said Cazares.

“I always loved him and never judged him. I always defended him. He was always the same Nathan with me and always made me laugh,” Cazares said.

“You can’t do what they did to him without hate in your heart. It is so tragic,” Cazares said.

The family has a GoFundMe account to raise money for funeral expenses and asked for support from the community. It can be found here: https://www.gofundme.com/f/nathan-daniel-cazares-funeral

Anyone with further information about the crime is asked to contact Brawley Detective Sgt. Jesse Rotner at 760-351-7777.

Meanwhile, Garcia said the family hopes to see the community come out to a rally demanding justice for Nathan, which will be a march at 6:30 p.m. July 17 starting near the site of Nathan’s death, down Main Street, to the Brawley Police Department.

Next
How COVID Impacts Local Trash-Haulers; Volume is Up, Revenue is Down