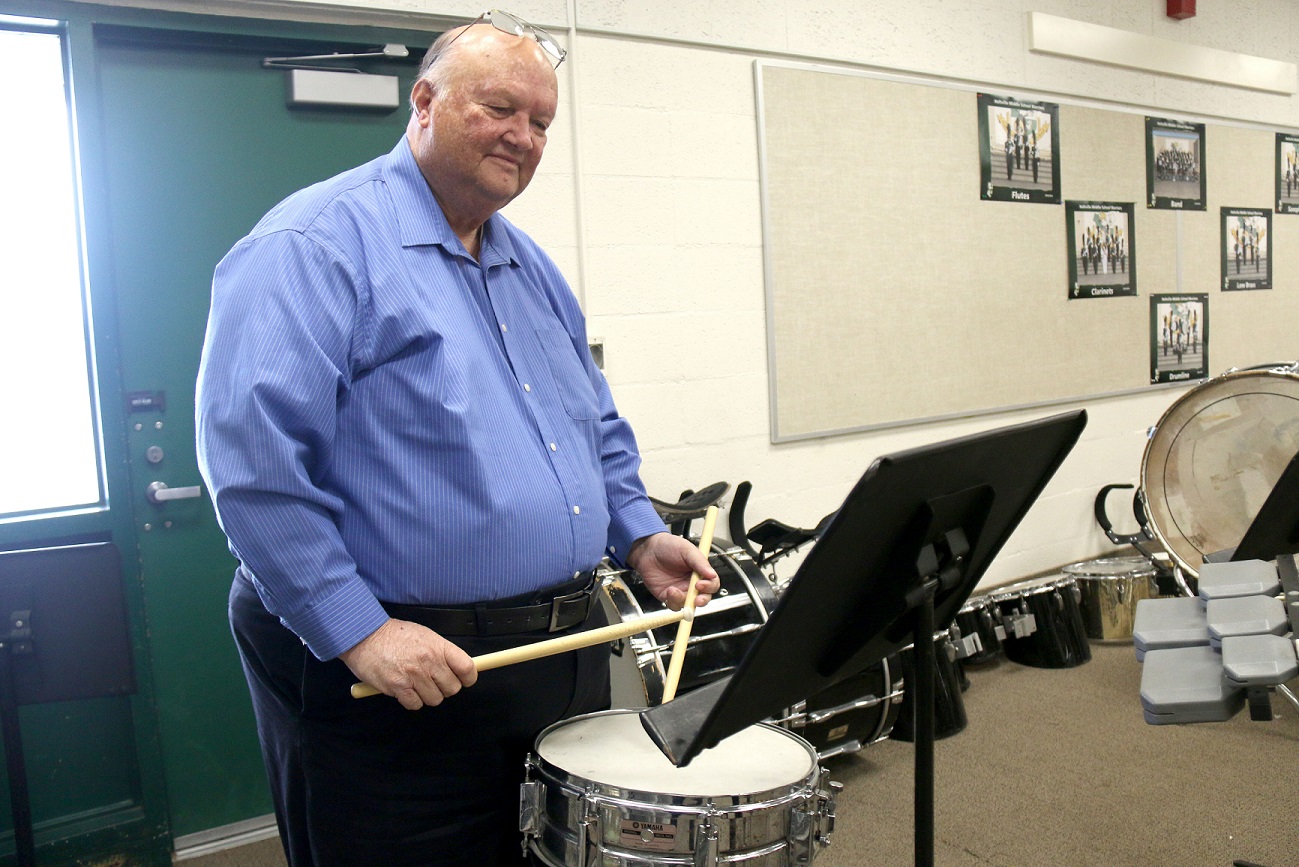 HOLTVILLE — After 49 total years in education, Holtville’s beloved middle school and former high school band director Lendal Macon has decided to hang up his baton for good, but his legacy will live on in the hearts and songs of his students.

Macon recently retired as the part-time band director at Holtville Middle School, a job he had held from late summer/fall 2009 to 2020.

It was a second career of sorts for the 74-year-old Macon, after he retired as the full-time band director from Holtville High School in June 2009, where he had taught since 1976.

After the 2009 Holtville High graduation ceremony, as Macon left the high school campus, the superintendent of the Holtville Unified School District at the time approached him and explained the middle school had just lost its band teacher.

“Most kids are in band in middle and high school for all four years to eight years and we become like a family. I had the best career that any teacher could hope for. They were all great, always remained my friends and I will always love them,” Macon said.

A few weeks ago, past students and parents surprised Macon with a drive-by retirement parade, where they honked horns and held signs with messages like “Happy retirement Mr. Macon,” “We Love You Mr. “Macon.”

“It was very special for me. I can still hear it and see it now. It made me feel so humble and happy. It was such a memorable thing they did for me. Those are the kind of students and parents that I had,” Macon said.

Macon explained he is happy to depart knowing his students are taking over where he left off. For instance, Holtville High School Band Director Yvonne Moreno is a former student, as is Holtville Middle School Principal Eric Velasquez.

The band director’s illustrious career began early and has demonstrated his excellence in both music and sports.

Macon started playing the drums in the fourth grade in his native Franklin County, Tennessee, before moving to Holtville with his family during the second semester of his sophomore year in February 1963.

When he arrived at Holtville High, he played with the band for two and a half years and lettered in five varsity sports.

“After high school, I went to Imperial Valley College and graduated there with an associate degree. Then I moved back home to Winchester, Tennessee, where I attended Middle Tennessee State University in Murfreesboro. I studied music there. Percussion was my primary instrument,” said Macon, adding that beginning band teachers have to learn how to play all the instruments to be able to teach students how to play them.

Macon moved back to Holtville, working in grocery stores and other jobs and then got married.

“I decided to go back to school again at (San Diego State University)-Imperial Valley and finished my college education and started teaching at Heber in 1971,” Macon said.

“My first 23 years at HHS, I taught world history and survey world history (a remedial world history class) as well as teaching band. Then I became the full-time band teacher at Holtville and also taught chorus, a cappella choir, guitar, and music appreciation, jazz band, and I also worked with the flag and shield core and my drum majors,” Macon said.

“We are still the only high school in the Valley to ever have won the perpetual sweepstakes award at the Brawley Cattle Call Parade,” Macon said.

One of Macon’s most outstanding memories was when the school board and superintendent named the Holtville High School band room the Lendal E. Macon Music and Art Center.

Macon was inducted in to the Green and Gold Hall of Fame in 2007 and named grand marshal of the Carrot Festival Parade in 2009.

“The most memorable moment of my band career was when my band played for President Ronald Reagan on Jan. 3, 1986 at the Naval Air Facility El Centro,” Macon said. “We played ‘Hail to the Chief’ for the president’s arrival.”

“Several Secret Service agents came to my classroom to vet the quality of my students. It was such an honor to play for the president of the United States,” Macon said.

In the future, music education with face challenges, but Macon believes inspired teachers will keep music programs alive and well.

For now, Macon has cancelled plans to visit family in Tennessee during his retirement because of the COVID-19 pandemic, one of the main reasons he decided not to go for 50 total years in education.

“For the foreseeable future, I believe and pray this virus will go away, hopefully by the beginning of next school year (2021-2022). Once school goes back to normal, the administration will make sure band is what it was. What will we do in our parades? A parade would not be a parade without bands,” Macon said.

Music is the only class in which students utilize both sides of their brain, the creative right side and the analytical left side, he said.

“You learn to think and be creative at the same time. It also has been proven over and over that it helps students with math and reading. Students who are in music do better in every subject, on the SATs and in college. Most of my students were A and B students,” said Macon, recommending every student participate in band or another a music class. “I always gave 110 percent every day and said a little prayer asking God to make me a better teacher today than I was yesterday. I always wanted to teach students a love of music, how to play and how to read music. I was always there before and after school to help my students,” said Macon, who credits his success as a band director to the help of his band parents, his daughter, Melissa Macon, and his wife, Victoria Macon for always helping.

Previous
How COVID Impacts Local Trash-Haulers; Volume is Up, Revenue is Down