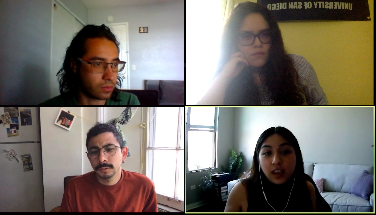 IMPERIAL VALLEY — The Imperial Valley Equity and Justice Coalition is a relatively new player on the social justice scene, forming around the efforts of about a dozen Valley natives, many of whom are 20-something Calexicans looking to give a voice to under-represented communities.

Although the group collectively arrived onto the landscape as an alternative to the economic and policy-based viewpoints that have arisen out of the COVID-19 pandemic, the group has plans to address a number of issues important to the community they represent, say several of the group’s members who gathered for an interview recently to talk about how they came to be and where they are headed.

Coalition members say they hope to address concerns about healthcare access, pollution and working conditions, among other issues, through a specific lens.

“We think there are particular interest groups that are always at the table — farm owners and business groups are always at the table. The county’s decisions reflect this underlying inequity in voice in the Valley,” said Luis Flores Jr. of Calexico, a founder of the group and the man who has primarily served as the group’s spokesperson in its early efforts. He was referring to decisions relative to COVID-19 and other issues locally.

“We are trying to make room for the interests of service and agricultural workers, immigrants, Spanish-speaking communities, and people who have become jaded with the way things never seem to change in the Valley,” the 29-year-old Flores said.

He was joined in the interview by fellow Calexicans and group organizers, 28-year-old Daniela Flores and 22-year-old Raul Ureña recently. Five of the group’s members are from Calexico, with the remainder of the founders representing Brawley and El Centro.

“There are many trade groups in the Valley representing many interests, like the Business Recovery Task Force and the chambers of commerce that represent businesses and investors,” Flores said. “We are a group that seeks to advocate on behalf of communities that don’t often have a seat at the tables where decisions are made. We are unique because we are community organizers, meaning that our goal is not merely to represent but to empower residents in civic participation and in holding elected leaders accountable.”

In early June, many locals heard of Flores and his group for the first time when they started an online petition and wrote letters to the governor’s office as an alternative voice to the county Board of Supervisors, who at that time began its own efforts to lobby Gov. Gavin Newsom for “local control” amid surging local COVID numbers to move further along the county and state’s Roadmap to Recovery.

Although that has been a moot point since, as Newsom has in recent weeks ordered rollbacks around the state due to escalating COVID infections, the coalition set itself apart early as organized and an intellectual. They were able to collect 2,000 online signatures, wrote multiple letters and aligned with some of the longtime social justice advocates in the community.

“We came together around COVID because we understood that the reason (the pandemic) was so bad is because of things that been around for a long time: lack of access to healthcare, environmental pollution that leads to respiratory illnesses that we know likely lead to complications with COVID, and we know Latinx folks in our country are likely to have jobs in agriculture and cleaning services that are essential but high risk,” Flores said.

Another organizer, Michelle Flores, noted how their Imperial Valley roots had given them the necessary perspective to raise awareness on the issues now compounding during the pandemic, and is a reason why they are choosing to act.

“A lot of the reason we came together is that we grew up in the Valley, but many of us were able to have experiences outside, which allowed us to see communities with similar challenges. But coming back to the Valley, we have seen that those challenges have not been addressed for decades in the same way they have been in other parts of the state and the county,” Michelle Flores said. “I think it is fair to say that all of us are feeling frustrated about the inequities and that we know that life can be better for our people.”

Additionally, Luis Flores added that these inequalities go beyond COVID because they are structural problems.

“We know we cannot just address COVID, as one of our members says, ‘It’s in our neighborhoods, who has a voice in policy, fighting for environmental justice, for good labor conditions,'” Luis Flores said. “So when we are doing community empowerment, and seeking justice and equity, we are trying to bring people to the table to change the conditions … it’s not our culture, and it’s not the way people behave, it’s structural things … the jobs and opportunities we have and had growing up in the Imperial Valley.”

At the moment, the coalition is working on a health equity resolution. The resolution outlines the reality of health disparities, records vulnerable populations, emphasizes the high rates of COVID in the Valley, and impacts COVID has had in our communities.

Specifically, the group is working with the Imperial County Board of Supervisors to pass a resolution that highlights the importance of having a health equity lens across every decision made regarding health equity during COVID and beyond.

“Some of the other things we are asking in that resolution is that they (the Imperial County Board of Supervisors) start working with groups like ours, that are representing community members, and other coalitions we work with, to build a COVID task force for equity response, one that is multi-sectored and informed by the community,” Michelle Flores said.

Accountability of Employers Also Being Addressed

Another issue the coalition has seen, which Luis Flores addressed, is the lack of precautions taken by large employers. Additionally, the coalition is working to raise awareness of the protection that workers have, such as sick leave, which many are not aware of.

“There are all these rules that should be protecting workers, and they are not being enforced. Employers also create conditions where workers are afraid to get tested because they’ll feel they will be out of a job and won’t be able to work, and they can’t afford to stay home,” Luis Flores said. “There’s protection, there is paid sick leave, but people don’t know it … and employers don’t shut down when there is an outbreak, this is a workplace safety problem, so we are trying to say, ‘We know this happening at work and we can put mechanisms in place to encourage employers to protect their workers.’”

The coalition would also like to see eviction moratoriums more widely addressed.

There are also plans to work with cities to have them pass eviction moratoriums, meaning having regulations that prevent landlords from evicting tenants during the pandemic if they fail to pay their rent; protection still lacking in our cities in Imperial County, Luis Flores said.

Coalition Has High Hopes Beyond COVID

“We have to get away from the idealization of certain people … At the end of the day, it is regular people that do very powerful things, like come together, sit down, talk to each other and be cognizant and aware of the issues around them,” Ureña said, as the group looks beyond COVID-related issues.

“A movement is a coordination and organization of different people, and especially these movements during COVID, through Zoom and TikTok, have become increasingly decentralized and coordinate different people with the same goal and purpose,” he said.

Beyond COVID, Ureña still sees how the mission the coalition formed under will thrive because its members are people who believe in equity and justice. “I think we will continue to be around, and we will continue to be people (aware of these issues) whether you see us in one organization or another. I think that is how movements develop. These are interesting times … and I hope there is a significant change,” Ureña said.

Next
PPP Loans Meant to Save Jobs For Local Businesses