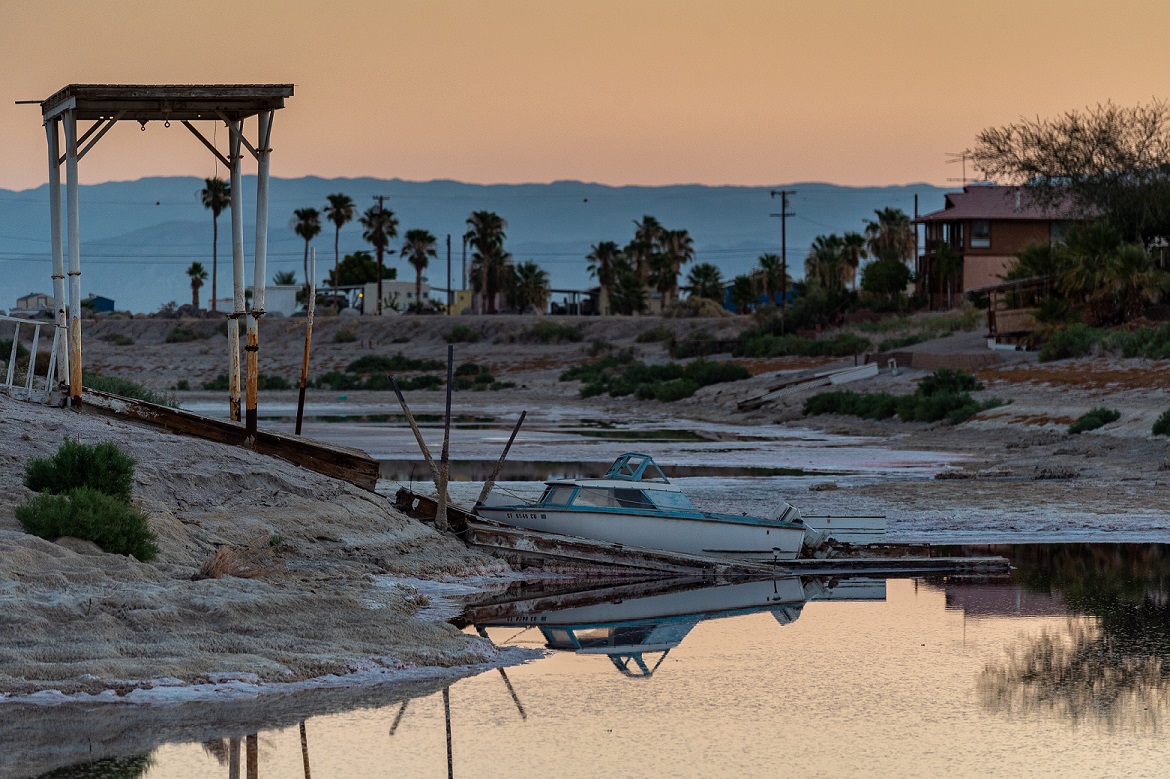 Known as the Desert Shores Keys or the Desert Shores Channels, this area in the community of Desert Shores on the western edge of the ailing Salton Sea is the site of one of the newest restoration projects planned around the manmade body of water that has been the cause of much concern over the last several decades. As the sea dries up and the waters recede, officials fear exposed playa could exacerbate asthma and other health conditions for Imperial and Coachella Valley residents. Currently the Imperial County Air Pollution Control District and the California Natural Resources Agency are entering into a memorandum of understanding as the start of the restoration project. | GETSOMEPHOTO
Home
Featured Stories
In Featured StoriesRegional News

DESERT SHORES — Ron Spears’ first experience with the Desert Shores community was a trip down Monterey Avenue in 2004.

“It was beautiful,” he remembered. “It was full to the top of the water. There were birds, pelicans. So, I was like, ‘Why aren’t people doing anything about this?’”

He joined the Desert Shores Chamber of Commerce, bought a vacation house in the community, created the Salton Sea Centennial Committee, but eventually became somewhat disillusioned by a lack of projects on the ground that could help restore the Salton Sea.

However, there is hope on the horizon for the Desert Shores area.

The state and Imperial County are finalizing an agreement to work toward the Desert Shores Channel Restoration project. The county Air Pollution Control District signed the draft agreement after its July 28 meeting.

“This is a ready-made project,” said Spears, chairman of the Salton Sea Restoration Committee. “You already have your infrastructure there.”

Acapulco Lane in Desert Shores used to be the water outlet that would go out to the sea, he said. That outlet, though, has dried up.

This had led to discolored water channels and standing water that can’t be replenished.

The restoration plan would include installing a berm and devising a pump system to get Salton Sea water flowing back into the channels, he said.

While some proposed projects at the Salton Sea are just mitigation for a receding water level, this one could “possibly re-establish the entire town of Desert Shores,” he said.

Once water can be moved back into the channels, work can be done to bring the salinity down, get tilapia back in the water and bring the birds back to the area, Spears said.

The project involves saving the habitat, which is the environmental side, but it also has a human health component, said Imperial County Air Pollution Control District Officer Matt Dessert. There is open ground, so reinvigorating the water channels in the community would help mitigate dust exposure.

“It’s a very positive project, a project that is long overdue,” he said.

The Air Pollution Control District is interested in stepping forward in any way it can to move this project forward, Dessert said.

Imperial County Supervisor Ryan Kelley, whose district includes the area of Imperial County that surrounds the Salton Sea, motioned to approve the agreement, saying it should be a model for projects around the sea.

“I think it’s going to be a focus point of activity that can happen at the Salton Sea that will be able to add value to not just the natural habitat but also the residents and communities,” he said.

Though the Desert Shores project is a smaller project, it can be applied to bigger areas of the sea, too, to help stabilize shoreline and reduce hazards in people’s backyards.

The memorandum of understanding, which was approved by the county Board of Supervisors seated as the county’s Air Pollution Control District board with a 5-0 vote on July 28, is just one of a number of changes happening at the Salton Sea.

The state budget signed by Gov. Gavin Newsom earlier this month, authorized 10 new positions for the Salton Sea Management Plan, including six staff members located at a local Salton Sea office and two at the Department of Fish and Wildlife’s Bermuda Dunes office.

The budget also included $19.3 million in Proposition 68 funding for the Salton Sea Authority to implement the North Lake Pilot Project, a 156-acre pilot project near the community of North Shore that would create new deep-water habitat to replace the habitat lost as the Salton Sea recedes, according to the state’s Salton Sea website. It would also create shallow habitat that would suppress dust along over one mile of receding shoreline.

While there is movement toward Salton Sea restoration, Spears is still somewhat weary as he says it’s going too slowly.

He’s been building a database of people to push legislators forward and hold officials responsible. While funding for these projects has to come from the state and other government levels, locals have to hold these officials accountable, he said.

He’s encouraging his network of Salton Sea supporters through the Salton Sea Restoration Committee on Facebook to contact state officials and make sure they know people support projects like the Desert Shores Channel Restoration project.