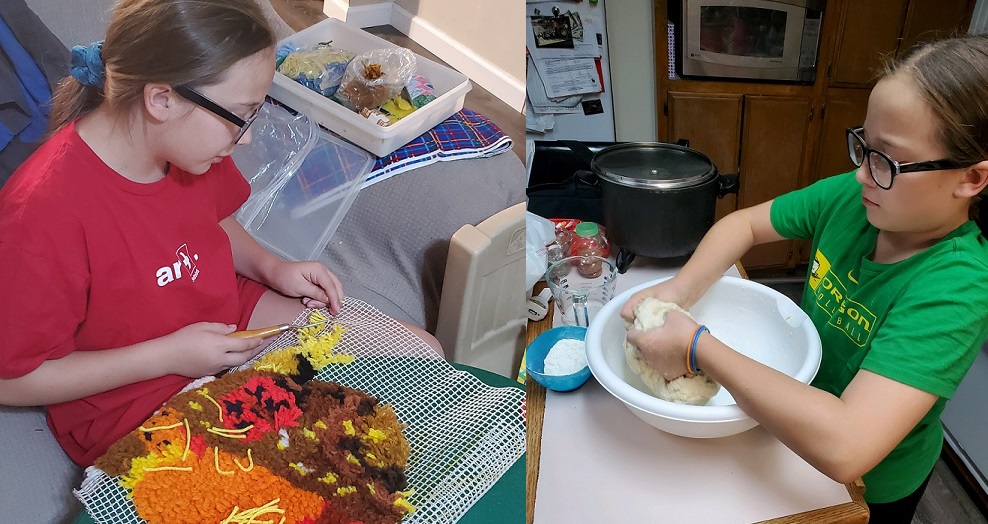 Finding Fun in the Dog Days of Summer … and the Pandemic

IMPERIAL VALLEY — “I’m bored” — those dreaded words that parents often hear during the summer months. But what about this summer, when the pandemic has many of us at home and some usual summer destinations and spots closed or plans on hold?

So, what’s a kid and his or her family to do? What activities are keeping the young and the restless entertained these days?

John and Stacey Britschgi, Holtville residents, have two daughters and one boy — Emma, 11, Anne, 17, and Colt, 14.

“I try to get them out of the house. Otherwise, they won’t get up till noon and will be on the phone or on games all day,” mom Stacey said.

Stacey Britschgi, a Verde 4-H Club leader, noted she and her husband take their trailer to Campo and the kids spend time fishing and swimming.

“I have a day care, and don’t go outside during the day, so I have a lot of playtime and they have so much fun dancing, and we get a little mosh pit going on in the living room,” she said.

When asked what have her kids have been doing this summer for fun, she noted, “My 14-year-old son Colt goes fishing or goes to grandpa’s house to go help papa in shop. Oldest daughter Anne enlisted into the U.S. Army straight out of high school. She is at boot camp. Youngest daughter Emma is the crafty one who is a YouTube learner. She is currently working on a latch hook rug. She is also teaching herself sign language.”

Jesse and Crystal Aguirre, El Centro residents, keep their daughter, Giawna Aguirre, 6, busy with special art projects and crafts. She also has a Slip ’N Slide, rides her bike, and skates in the evening hours.

During the day, she plays with her toys and sometimes talks to family and friends via Facetime.

But recently, she was super excited because her 10-foot pool arrived — literally Christmas in July for her. Her father ordered it online a week ago because he had no luck finding one locally or at neighboring cities.

“Imperial Valley is an extremely hot desert where the water in the swimming pool is relatively cool anytime of the day. The swimming pool creates an escape for the kids especially that the park and playgrounds and the community pool are not doable right now,” dad Jesse said.

John and Ayron Moiola, Holtville residents, have a daughter and a son — Ellie, 12, and John David, 4.

“We quickly turned to 4-H involvement when we moved to Holtville in May. We did a virtual 4-H class through the state of California, two sessions a day,” mom Ayron said.

“Ellie also has been sewing, cooking and taking care of puppies,” she added.

“John David has discovered water balloons and riding his bike and playing outside with his tractors,” Ayron Moiola said. “He made slime for the first time.”

When asking John David what he likes to do during summertime, he responded cheerfully, “Going to the beach.”

Ayron quickly clarified: “We haven’t been able to go to the beach this summer, but that is his favorite thing to do.”

Both John and Ayron are active in 4-H John is a rocketry leader and Ayron is a project leader. She also leads cooking and public speaking, and fashion review for 4-H.

“4-H has transitioned to the virtual world so well,” Ayron said. “Ellie was able to compete in local, regional and state for her cultural arts presentation.”

“This weekend,” she said, “dancers of Dancing Feet are videoing themselves individually and then splicing where they will all be dancing.”

They found a way to help them all dance together.

“I think the world of people who are trying to give an opportunity to kids,” Ayron said.

When asked what it takes to join 4-H, Ayron said, “You can go on their website and look at the different clubs and find the one that meets your schedule. In August they have an orientation, like a membership drive. It used to be held at the mall. Don’t know at this point where this will be. There is a small fee.”

“The 4-H has all kinds of programs for all kinds of families,” she explained. “4-H is not just the fair and just animals. It is endless what kids can learn. (It) involves public speaking, citizenship, and opportunities that expand your horizons beyond school. It is a great place for those who are not finding their place elsewhere.”

“We met in June at the park, kept distance, and had masks. I was able to determine how many palm trees were planted at the park back in the day. I gave the history of the park. I informed them there was a circus in town, and the monkeys were left at the park in cages — don’t know the reason. Also there used to be a fishpond on the west side of the park.”

Ideas for the Rest of the Summer

To keep kids and youth entertained for the rest of the summer, you may find some ideas in the 4-H Club website https://4-h.org/ such as gardening, photography, exercise, crafts, art, jewelry making, coloring, rocket projects, building a fort from cardboard boxes, virtual learning/projects, and origami.

Remember to be safe while having fun. Never swim in a canal. Get wet with a sprinkler, Slip ‘N Slide, supervised pool, or water balloons.