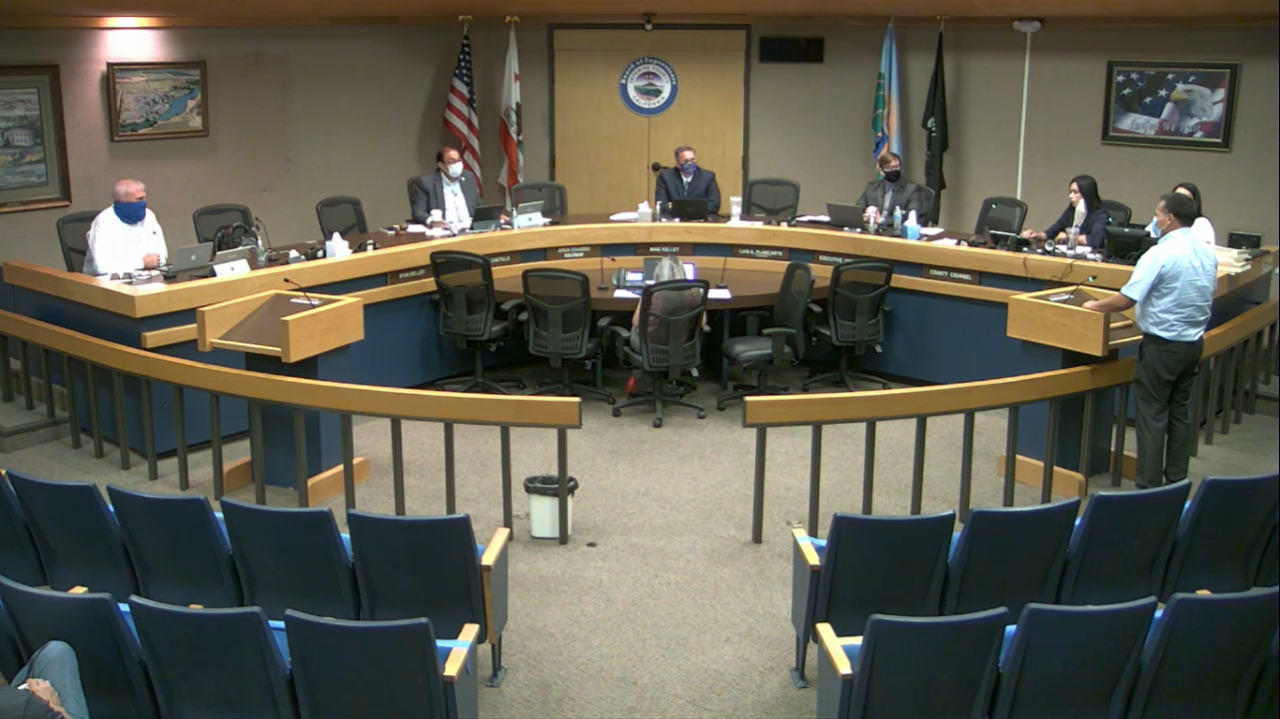 Luis Olmedo, executive director of Comite Civico Del Valle, addresses the county Board of Supervisors on Aug. 4 before the board adopted a health equity resolution that established the Imperial County Health Equity Committee that will collaborate with county departments and community stakeholders. | VIDEO SCREEN CAPTURE
Home
Regional News
In Regional News

The county Board of Supervisors approved a health equity resolution and formed an ad hoc committee to look into issues of health inequality in the Valley.

The resolution was brought to the board by the two supervisors who will sit on the committee, Supervisor Ryan Kelley and board Vice Chair, Supervisor Michael Kelley.

“The goals are to address some of the inequities that we have in Imperial Valley and to bring attention to that inside of Imperial County, but outside as well,” Ryan Kelley said. “One thing that is very well known to myself is the limit of practicing providers in the Valley and the access and availability of healthcare professionals in this Valley. I’m hoping that through this action we’re able to bring some attention, some direct focus on establishing a residency program and recruitment to increase the number of providers.”

Imperial County is ranked the lowest in the state for overall health factors by the Robert Wood Johnson Foundation, cited Ryan Kelley.

Those factors that drive health include health behaviors like adult obesity, teen births, excessive drinking, access to exercise opportunities and more, according to the Robert Wood Johnson Foundation website. The area also faces little access to primary care physicians, with a ratio of 4,250 patients to one doctor.

Nearly a dozen people made comments to the board supporting the resolution, including Daniela Flores, one of the founders of the Imperial Valley Equity and Justice Coalition.

It is a collaborative document that includes input from community health advocates throughout the Valley as well as government leaders, she said. And it addresses inequities that have been brought to sharp focus with the COVID-19 pandemic.

“We also believe that these collaborations will help bring in resources that are needed to address these deep health and mental health disparities and inequities that all of us here live through and live with every single day,” Flores said.

The resolution will help put the area on a new path that could last for the next 100 years, added Comite Civico del Valle Executive Director Luis Olmedo. However, the hard work will begin after the board approves the resolution, he said.

Ryan Kelley and Michael Kelley have been meeting with community members concerned about health issues, especially after the COVID-19 pandemic started, said Michael Kelley. With something like this, “there’s nothing better than to have the community involved as we move forward,” he said.

The board approved the resolution with a 4-0 vote. Supervisor Raymond Castillo had left the meeting before the vote.

In Other Decisions Aug. 4

The supervisors also approved the second reading of an ordinance to repeal a previously-not-enforced ordinance that barred county officers and employees from living outside of the county. Supervisors Luis Plancarte and Ryan Kelley both mentioned getting a lot of comments about the board’s previous vote on July 28 to allow county employees to live outside of the United States.

The board voted 3-1 to approve the new ordinance. Ryan Kelley voted against the ordinance as he did during the first vote the week before.

Before the Aug. 4 vote, County Counsel Adam Crook added that repealing the ordinance regarding residency does not waive requirements for county employment. Employees still have to be able to legally work in the U.S.

Previous
Welcome Back to School Parade Set for First Day