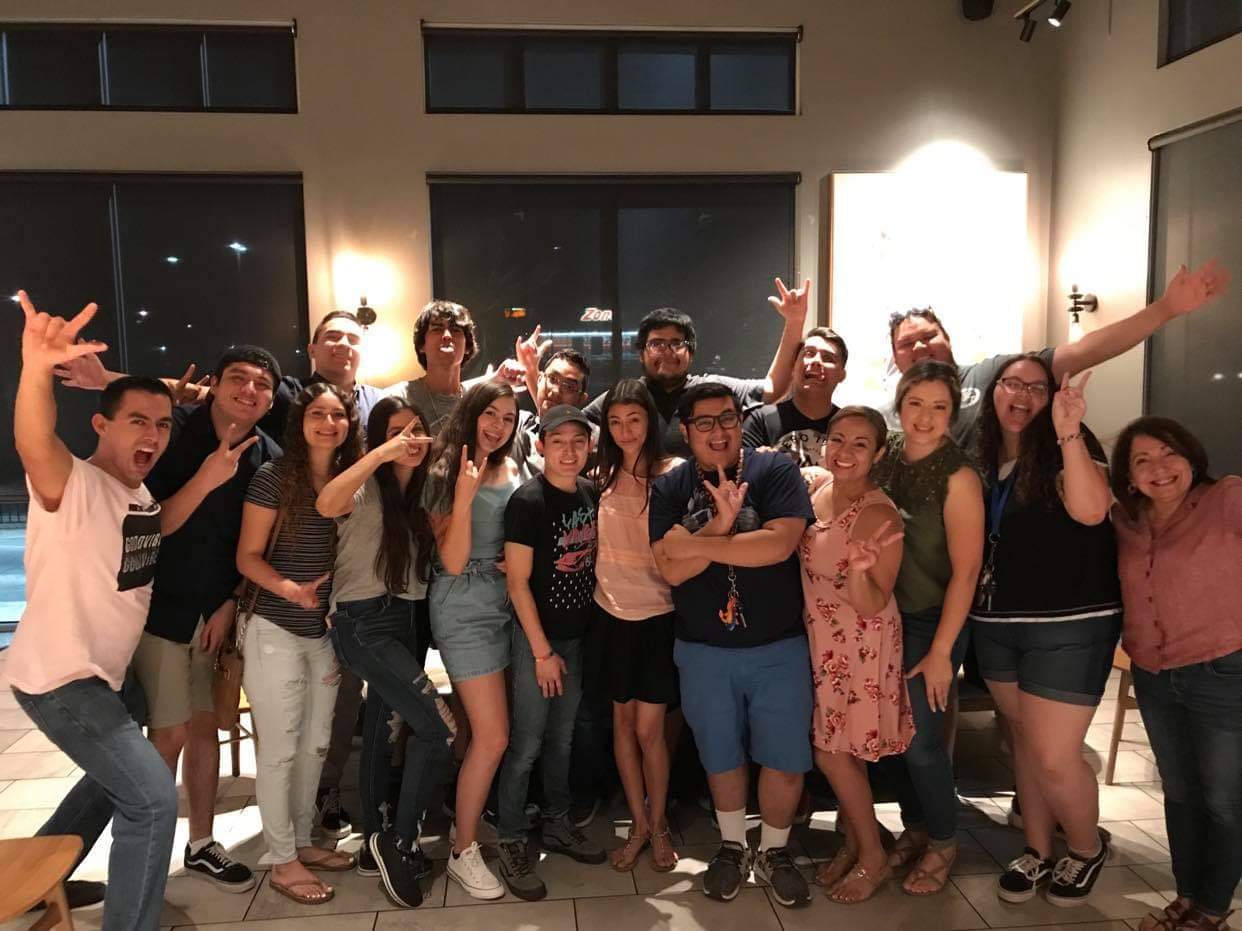 Edward Martinez meets with other members of the local Deaf community at the Starbucks on Wake Avenue in El Centro recently. | COURTESY PHOTO
Home
Local News
In Local NewsRegional News

Local Deaf and Hard of Hearing Create a Local Community

IMPERIAL VALLEY — With his hands and his heart, Christian Redondo has become an ambassador for the Imperial Valley’s Deaf and Hard of Hearing community by interpreting local public meetings and advocating for the hearing-impaired.

Redondo is neither deaf nor hard of hearing, but he wanted to learn sign language because his mother has always been deaf and was always difficult to communicate with, he said in a recent interview.

‘My mother taught me a few signs, but when I was an adult, she married a deaf person after which I realized a few signs would not be enough,” said Redondo, who started studying American Sign Language at Imperial Valley College in 2012.

“As I was starting to take my first couple of ASL classes at IVC and developing fluency, it touched my mom,” Redondo said. “It changed things immensely in my life. It is easier to communicate at home and I was finally able to open up to my mom and have a conversation.”

Developed from French Sign Language in 1817, ASL is only used in Canada and the United States.

After earning an associate degree in ASL at IVC, Redondo became a certified interpreter through the Registry of Interpreters for the Deaf.

“To become an interpreter, you first have to take ASL classes to learn the language.” Redondo said. “Next, you enter an interpreter-training program, where you learn technical aspects like a code of ethics, and a socio-linguistic model, which has to do with multitasking all the elements of communicating in sign.”

ASL has become so popular at IVC, that it is common for the class to be full and have a waiting list, Redondo said, who started learning ASL with the goal of becoming an interpreter but has since set his sights on becoming a teacher.

When schools closed because of COVID-19, Redondo started working with the Imperial County Public Health Department because it required an ASL interpreter for public meetings.

“It is legally required to have interpreting services for the Deaf and Hard of Hearing at public hearings because of the Americans with Disability Act. Good captions can only give you so much. Much of closed captions are generated by autotype and have many mistakes. In addition, captioning does not show emotion,” said Redondo, who showed great emotion when singing a song in ASL at the end of IVC’s virtual commencement ceremony in July.

Work with the county has not been as consistent as Redondo would like, but he has found other avenues to articulate his hard-earned skill.

“My mom cried when she saw me interpret my first musical in Palm Springs,” said Redondo, who is now recruiting his younger siblings to take ASL classes.

“I got feedback from the Deaf and Hard of Hearing when I started doing theatrical interpreting that boosted my confidence to keep going and keep learning,” said Redondo, citing an ASL Motto. “You are an eternal student and you never cease to learn.”

It is hard to quantify how many Deaf people there are in Imperial County, Redondo said. Nonetheless, he encourages everyone to take an ASL class.

“Anybody in the Valley should take an ASL class, because if you ever communicate with a Deaf person, it will be so much easier to communicate through sign than instead of having to use your phone,” Redondo said.

Eduardo Martinez was born Deaf and started learning sign language around the age of 3 or 4. In 2019, he began attending Gallaudet University, the premier ASL university in the world.

“Gallaudet is In Washington, D.C. The school requires a certain proficiency in ASL for students to attend,” Martinez said. “You have to pass an ASL proficiency interview with a level 2.0 or higher and it is hard to pass.”

Because his goal is to become an ASL teacher, Martinez needed to pass the proficiency interview with a level of 4.0 or higher.

“To be accepted into Gallaudet, you need to formally study the language and know the cultural aspects within the language,” said Martinez, who plans to go for a master’s degree after completing the bachelor’s degree program at Gallaudet.

Martinez admitted he had never been asked what it was like to grow up Deaf in Calexico.

“I’m from Calexico and in the Valley, you tend to learn ASL in the public-school system,” said Martinez. “Compared to a different city or county, in the Valley you will encounter Deaf people of varying abilities in sign language. If you encounter somebody who went to a school for the Deaf, they will communicate differently than someone who learned in a more rural, isolated area.”

Martinez was mainstreamed in local schools when he was younger, which meant that as a Deaf person, he went to class with hearing people.

“The experience in Calexico was really different.  In elementary, I already had to navigate between three languages (English, Spanish, and ASL). It was overwhelming not only in the sense I could not communicate accurately with my peers but with my family. I had to take a lip-reading class there, which was a burden and made things harder,” said Martinez, who mentioned things started to improve for him in high school.

Earlier Redondo explained the Deaf and Hard of Hearing prefer using sign language and tend to frown on lip reading because the discipline is challenging, not as effective as sign and cannot communicate emotion.

“As a sophomore in high school, I noticed Deaf people were in a small close-knit group. We were able to communicate in the group and there was a barrier to communicate with other people,” said Martinez, who encourages the hearing unimpaired to take an ASL class to get rid of the barrier and further their own education.

“Everything changed for me when I went to IVC. I had Deaf Services and people around me who I could communicate with,” Martinez said. “The community encouraged me to keep going and increase my fluency in ASL.”

After learning of Martinez’s inspirational story, it is easy to understand why he is such a strong advocate for learning American Sign Language.

“Learning ASL is going to benefit you no matter what. Don’t put it in terms of easy or hard. It will take practice and you need time to get better, but it will open up so many avenues,” Martinez said. “Treat Deaf people with respect. Just like if you were meeting people from another country, you would want to treat Deaf people with the same respect and integrity.”

When asked if there was anything else he wanted to add, Martinez responded with a bold and personally triumphant statement.

“Deaf people can do anything a hearing person can do except hear,” he said.