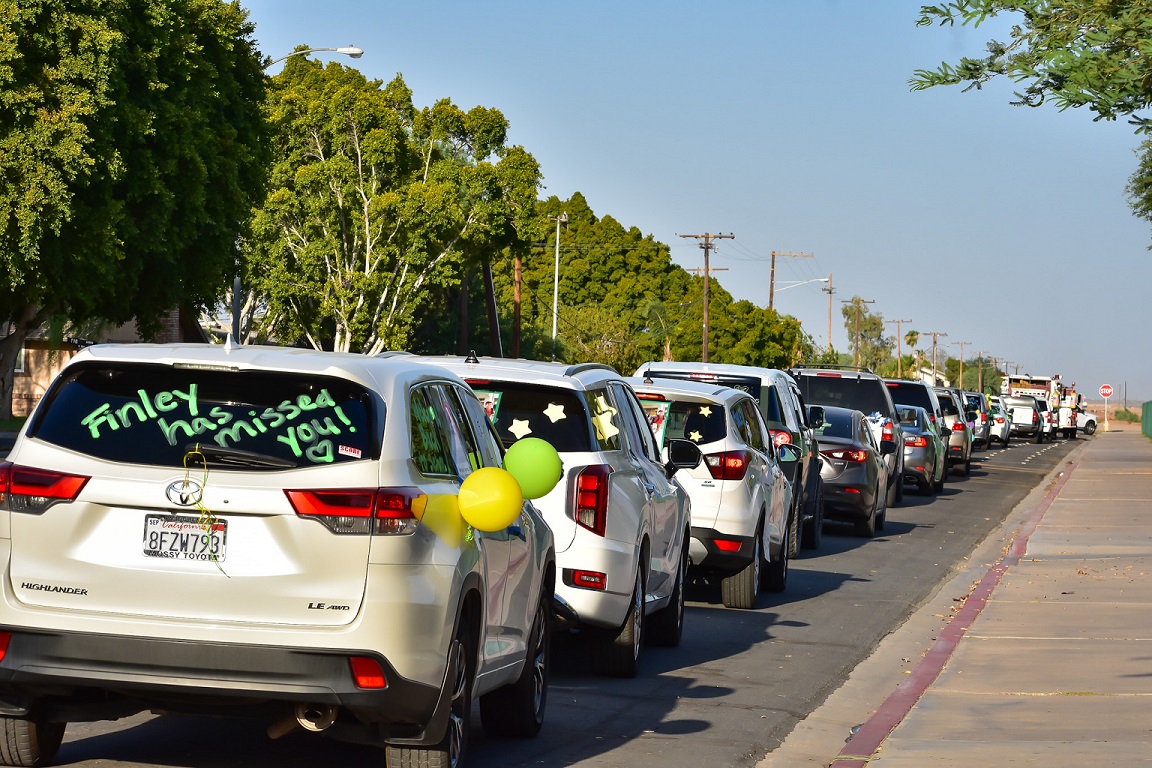 A line of cars, trucks, SUVs and vans can be seen from the rear during a Back-to-School/Census parade around the city of Holtville on Aug. 17. | CORISSA IBARRA PHOTO
Home
Featured Stories
In Featured StoriesLocal News

HOLTVILLE — Sirens and car horns echoed along the streets of Holtville as educators and city officials led a parade to welcome students back to school following their first day of online classes.

The Welcome Back to School/Census parade came together around 5:30 p.m. Aug. 17 near Emmett S. Finley Elementary School on Seventh Street, right before Beale Avenue. By 6 p.m., more than 20 decorated cars formed a line of educators and city officials led by the Holtville Fire Department.

The parade traveled along Beale, passing in front of Holtville Middle School and then moved left onto East Ninth Street until it reached Olive Avenue, where it then passed Holtville High School. The procession came to an end on West Sixth Street in front of City Hall in Holt Park.

“Our teachers mean a lot to us and we very much appreciate everything they are doing,” Allegranza said. “Our community is always so generous, and we have quite a few gifts here.”

Under normal circumstances the Holtville Chamber of Commerce hosts a Welcome Back Teachers’ Luncheon on the first day of school, so to adapt during the ongoing coronavirus pandemic, the chamber held a Teacher Appreciation Raffle inside its offices and recorded the winners live to the Holtville chamber’s Facebook page.

Meanwhile, as parade participants slowly drove past homes, they made sure to honk their car horns and cheer on students and community members as they came outside to watch the parade go on by. Each car featured in the parade varied in their decorations, with some supporting individual schools, to others sharing inspiring messages to their students, and even spreading awareness about the 2020 Census.

“People have been doing these parades, so we figured let’s kill two birds with one stone,” Allegranza said.

The parade was the first of its kind organized by the chamber and the Holtville Complete Count Committee, which hopes to continue to support educators by encouraging local residents to participate in the 2020 Census, explained Haley Dowsey, personnel technician for the city of Holtville.

“The 2020 Census will inform decisions about allocating hundreds of billions of dollars in federal funding to communities across the country,” Dowsey explained Aug. 4. “That includes funding and support for school programs and services such as special education, free and reduced-price lunch, classroom technology, teacher training, after-school programs, Head Start and more.”

Prior to the parade, city officials provided parade participants with material to decorate their cars, including blank white poster boards, five markers and a census poster, along with seven possible census phrases to add to their cars, Dowsey noted.

Michele Foss, a librarian for Finley Elementary School, was more than ready to decorate her van and join the evening parade.

“I do miss my kids, so that’s why I wanted to join the parade,” Foss said. “To show them that we are here. Even though we can’t be together, we are still a united community.”

As a school librarian, Foss said she knew she wanted to focus her decorations on reading-related items from popular books to messages about the importance of reading.

“Being a librarian, reading is my main goal,” she said. “I love my job and to help kids find their passion for reading.”

Among the parade cars was Crystal Arias, a fourth-grade dual-language teacher for Finley Elementary School, who decided to join the parade despite having earlier finished up a full day’s worth of classes.

“Today had its challenges, but it went overall well,” Arias said. “This is just a way for the kids to see me, and I think that’s the important part, to know you’re still thinking about them and are willing to take time out of your day to come out.”

Arias hopes that the parade will keep her students motivated throughout the school year despite distance-learning measures in place.

“I hope my students can cope with the changes and know they are cared for and supported,” she said. “We are here to support both students and parents the best we can.”

Behind Arias’ car within the parade was Nayeli Garcia, a special education teacher at Finley, who also wanted to spend her evening supporting her school and students after receiving an email about the event from the city.

“I replied to Haley at the city, and she sent me a poster right away to put on my car,” Garcia said. “I was going to go ahead and do this to come out and represent Finely.”

Pine School fourth-grader Aden Lyerly, 9, was one of many students who came out to watch the parade go by. He stood at the edge of the sidewalk beside his grandmother and Holtville resident, Debbie Fjeldsted.

“My daughter-in-law is a teacher, so I heard about the parade from her,” Fjeldsted said.

Although Aden felt “very good about doing homeschool at my home,” he did want to come out to the parade to see a few former teachers that he had missed.

“I know (Mrs. Phillips isn’t my teacher anymore) I just missed her,” he said after he waved and shouted “hi” to her as she drove past him.

If any teachers were not able to watch the live Teacher Appreciation Raffle on Facebook, the Holtville chamber will be posting a full list of all the winners Aug.18 with prize pick-up instructions. For more information, contact the chamber at 760-356-2923.

Also, the Holtville Complete Count Committee is continuing to urge community members to fill out their Census or encourage family and friends to do so. For questions regarding the census, visit the website www.2020census.gov.

Next
Holtville Schools Begin Virtually on First Day of Classes