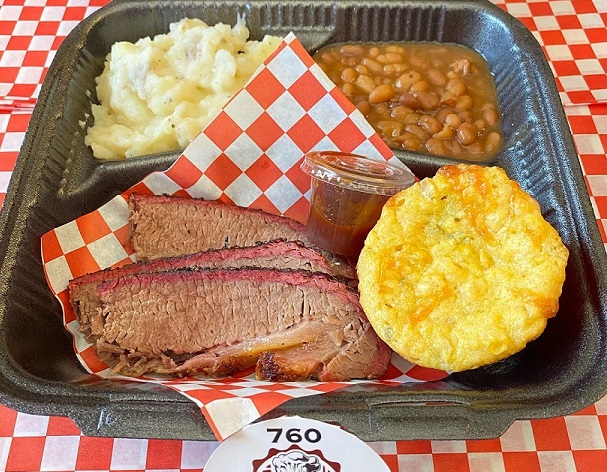 CALEXICO — A family with deep roots in the Imperial Valley was on the hunt for true barbecue in the Valley, but never found anything that really fit that definition for them.

That is, until they decided to start their own smokehouse out of their home.

760 Smokehouse, owned and operated by the Luna family in Calexico, smokes their brisket and ribs, sometimes for hours, which gives it the distinct taste and tender meats, said owner Aurelio Luna. It’s something the family has quite a bit of experience with, as they’re making meals they usually make for their family.

“We came up with what we eat on a Sunday,” Luna said. “We’re still changing things. We’re learning as we’re going, and going by what people are telling us.”

New items are being added to the menu, and the family is listening to what its customers want, he said. An added benefit is that the family is able to work together at home through the county health department’s Microenterprise Home Kitchen Operation permit.

The program started earlier this year, and, so far, three Imperial Valley families have taken part in it. That was one of the facts the Imperial County Board of Supervisors learned during a presentation about the Microenterprise Home Kitchen Operation program that took place at the Aug. 25 board meeting.

District 1 Supervisor Jesus Escobar asked for the refresher on the microenterprise program because it could provide an alternate income during the current COVID-19 pandemic.

“There’s a lot of people that are hurting financially that for whatever reason may not be getting unemployment benefits,” Escobar said. “This is just an additional avenue where people can get additional dollars.”

The home-based program began in January after state legislation made it possible for counties to opt in or opt out of allowing these home-based kitchen operations, said Jeff Lamoure, deputy director for environmental health. Through this program, food facilities can be operated out of a private home.

To date, Imperial, Riverside and Santa Barbara counties are the only jurisdictions in California to opt into the program, though San Mateo and San Bernardino counties are conducting pilot studies, Lamoure said.

There are some limitations, of course, with food being required to be prepared, cooked, and served on the same day, as well as limits on the number of meals per day or week, depending on the business, he added. Food can currently only be picked up or delivered.

Through this program, these small restaurant businesses are exempt from unannounced risk-based inspections and certain equipment and sanitation requirements, Lamoure said.

This particular program isn’t right for all home-based cooking businesses, he added. Some baked goods operations work better under different permitting options as they would have to sell all their baked goods the day they are made or throw away or donate what’s leftover.

While the Luna family has only been operating 760 Smokehouse for about two and a half months, it’s been going well, owner Luna said. Customers have been saying they love the food, and that the meat tastes like something they’ve never tried in the Valley. That was part of the goal, Luna continued, not to be the typical food chain.

“It’s been really good,” he said. “Hopefully once COVID-19 goes away, we can expand to something bigger, but with this situation it’s really hard.” Luna said he is simply happy someone is bringing “legit barbecue to the Valley,” and why shouldn’t it be him?