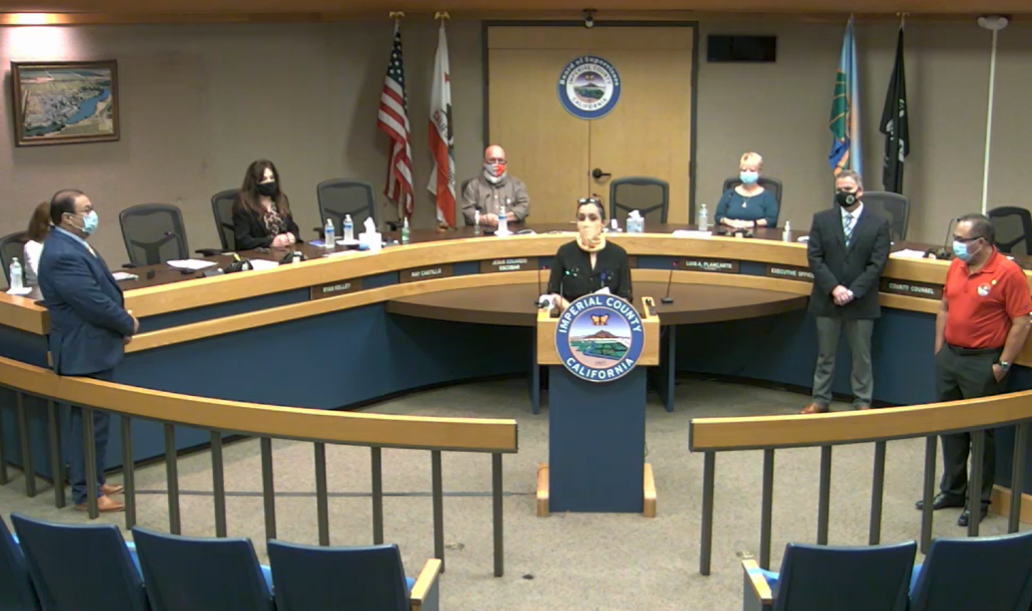 Jeanette Angulo (center), Imperial County Public Health director, flanked by other county and city officials, speaks about the county’s “variance” to move into Stage 2 on the Roadmap to Recovery being accepted with modifications. | VIDEO SCREEN CAPTURE
Home
COVID-19
In COVID-19Local NewsRegional News

(UPDATED Aug. 26: Additional information about openings and the amended health order not in the breaking news version from Aug. 25. Additional background included.)

Although it’s yet unclear how some of this might work at the height of summer temperatures and stifling humidity, Imperial County restaurants, movie theaters, churches, gyms and fitness centers, and barbershops and beauty salons were all given the OK by the state to re-open Aug. 25 in an “outdoors only” capacity after five months of trying to get COVID under control.

County government and Public Health Department officials, flanked by the mayors of the region’s largest cities, announced that the state had accepted the county’s request for a “variance” to fully step into Stage 2 of the Roadmap to Recovery, which means many businesses were allowed to re-open in a modified capacity starting at 5 p.m. Aug. 25, it was announced during a press conference.

However, because Imperial County remains on the state’s data-monitoring list, along with more than two dozen other California counties, there will be a number of modifications and limitations to the openings allowed, with an emphasis placed on only allowing many businesses, services and gatherings to resume outdoors, Imperial County Public Health Director Jeanette Angulo said during the press conference.

Imperial County Public Health Officer, Dr. Stephen Munday, released a revised health order later in the afternoon Aug. 25 reflecting the approvals by the state but keeping in place orders on social distancing and the use of face coverings to keep the transmission of COVID at a minimum.

“I do understand, given our weather conditions, it may seem less than ideal for some businesses to be limited to outdoor operations at this time. However, this is a sign of significant improvement for our county. And with our continued diligence, I’m hopeful that we can continue to move towards regaining a greater sense of normalcy in our community,” Munday stated in a county press release announcing the amended health order.

“I’m extremely proud of the progress our county has made,” Munday stated.

“Our community has experienced difficult times over the past several months, including illness, loss of lives, economic hardships, and concerns due to COVID-19. Amid the adversity we have faced, we are sharing this exciting news in an effort to provide some hope for our community,” county Board of Supervisors’ Chairman Luis A. Plancarte said.

As of Aug. 26, there were 283 deaths reported, 10,509 total COVID-positive cases reported, with 813 active cases and 9,413 considered recovered. Epidemiological stability surged to 11.93 percent Aug. 26 after hovering around 7 percent and 8 percent for the past week.

Meanwhile, in addition to the list of businesses and sectors that Angulo announced could open to outdoors-only traffic, she said some indoors re-openings were permitted on a limited basis as well, including all retail businesses in general, childcare centers, libraries and day camps.

Sectors still not allowed to open include bars, brewpubs, and breweries, unless they were serving food outdoors, and night clubs, tattoo and piercing shops, and street festivals and gatherings. K-12 schools cannot open until the county has been off the data-monitoring list for 14 consecutive days, she said.

All re-openings would be in accordance with state guidelines on safe practices and measures for individual sectors that take into account physical distancing, facial coverings, specialized sanitation and sterilization, and barriers in some cases, Angulo noted.

Although the mayors or council members from Imperial, Calexico, Brawley, and Holtville were on hand, the only city official to speak Aug. 15 was El Centro Mayor Efrain Silva, of the county’s largest city and seat of government.

“This is a very important day for our communities,” Silva said, adding that while El Centro has shared in the collective frustration of the past five months, this latest news was a step toward a “semi-normal way of life.”

“We’re far from where we need to be,” he said. “Outdoors activities this time of year are not ideal, but this is progress.”

“The people, our residents,” and “leaders” from sectors like business, faith-based organizations, and schools, not just political leaders, are responsible for getting the county to this point through “mutual aid” and cooperating with health orders, said County Executive Officer Tony Rouhotas Jr.

He said people made significant changes to their lives and remained “Imperial County Strong,” Rouhotas said.

Those sectors and types of businesses that can open “outdoors only” include:

Those sectors and types of businesses that can open indoors include:

Sectors or businesses not allowed to open until Stage 3 or 4 include:

What About the City of Imperial?

Although it was a message of solidarity Aug. 25, it was made clear by Imperial Mayor Darrell Pechtl after the press conference that the city will forge ahead with its own timelines on openings, which was the message sent to the county and state on Aug. 21, when the city approved a resolution allowing all manner of businesses to re-open immediately, outdoor or indoor.

“Our businesses have suffered beyond what is acceptable to this point,” Pechtl said.

He said other counties in California have been given the chance to move forward on the roadmap and open for a limited time before being forced to close again due to resurgences in COVID. In Imperial County, that has never been the case.

“We have countless businesses that have never opened since March,” Pechtl said.

County officials let it be known last week that Imperial allowing businesses to open early, outside the state’s operating timeframe or approval, would be subject to enforcement actions.

Angulo was asked during the county weekly COVID press conference with the media on Aug. 24 how Imperial’s actions might affect the county and what was county intending to do in that regard. She limited the answer to mostly public health and not licensure or permitting enforcement.

“When responding to an emergency, operating in silos brings about its own complications. Operating in silos just places challenges on the overall emergency response efforts and may put at risk the overall health and well-being residents in very direct or indirect ways. It affects the overall operations and efforts, as it relates to community preparedness, emergency operations coordination, mass care, medical surge, responder safety and health, just to name a few,” she said.

“Now, public health understands that widely re-opening more sectors of this community may mean increased transmission and hospitalizations, and therefore, reduced hospital capacity. So Public Health and everyone that is taking part in this response effort, we must take steps to move forward, but in a very thoughtful and responsible and in a collective way, to lessen the impacts, you know, to the residents of this community, and of course businesses, agencies, and the workforce,” Angulo added.

“Imperial County knows what it means to double, triple or quadruple COVID-19 cases in a matter of a few weeks. We also know what it means to have to transfer an unprecedented number of patients (if you remember, over 600 transfers out of county in a lapse of just a few weeks) and, you know, to set up systems (such as the alternate care site) to help address the needs of our community. And while we agree that livelihoods are very important … people’s lives stand on top of it. I will not speak for the state or federal government, but what we do know is, that there have been repercussions for other California cities for opting to take a different path. So, I’ll just stop there,” Angulo added.

The city of Imperial is already aware that the county and state could send inspection teams into Imperial to close down businesses. Pechtl said he is also aware that the resolution the city passed Aug. 21 might have effectively ended the city’s access to $245,500 in federal Coronavirus Aid, Relief, and Economic Security (CARES) Act funding Imperial is due.

He said Aug. 19 that such an amount was a small price to pay for the livelihood of city merchants.