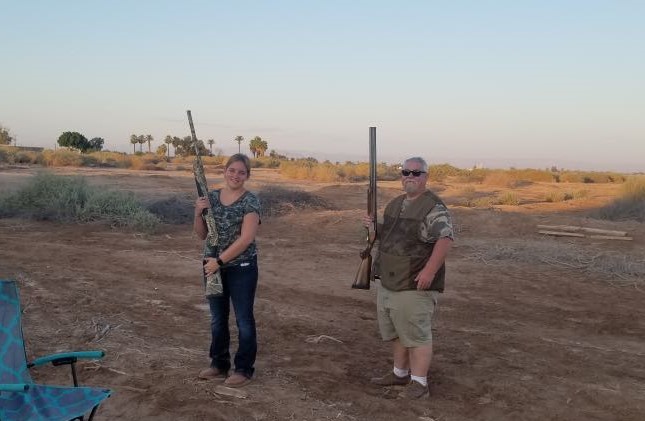 Haleigh Townsel (from left), 15, and her grandfather, Keith Lewis, of Imperial hunt together on opening day of dove season on Sept. 1. This was Haleigh’s first opening-day hunt, according to her mother, Jennifer Wilson Townsel. | PHOTO COURTESY OF JENNIFER WILSON TOWNSEL
Home
Featured Stories
In Featured StoriesRegional News

IMPERIAL VALLEY — Dove season may include more social distancing this year, but it also included hunters in the fields in the Imperial Valley.

The first of two dove-hunting seasons runs through Sept. 15 statewide, followed by a second hunt period Nov. 14 through Dec. 28. Dates of the seasons haven’t been impacted by COVID-19, said Megan Crane with California Department of Fish and Wildlife Upland Game Program.

“If anything, I would expect more hunters,” she said. “People are itching to get outside.”

There are some changes, as fewer visitor centers are open to minimize the potential exposure to COVID-19, she said. However, hunter check stations will be open for hunters to get their day passes.

All of the California Department of Fish and Wildlife’s most popular and productive wildlife areas for dove hunting are open to the public during the first half of the season, which started Sept. 1, according to a press release from the state. Those areas include Imperial Valley wildlife areas and Palo Verde Ecological Reserve.

All of those areas were planted with food crops to attract and hold doves, according to the state.

While dove-hunting season continued somewhat normally, it is still unclear what federal officials will do with the upcoming dunes season.

The U.S. Bureau of Land Management is continuing to work with local officials to determine the best and safest step forward at the Imperial Sand Dunes Recreation Area, according to Public Affairs Officer Michelle Van Der Linden. Essential staff are preparing for the season using COVID-mitigation standards in the field.

“Continuing our service to the public while doing our part to address COVID-19 is very important and includes asking visitors to follow guidance from the CDC and recommendations from state and local public health authorities,” she wrote in an email. “While the BLM will do its best to manage public lands for public health and safety, visitors are responsible for deciding what is safe and taking responsibility for their safety and well-being.”

There will be some changes to the upcoming tourism season, including a canceled festival.

Due to current COVID regulations, Polaris officials decided to cancel the annual Camp RZR festival, which had been scheduled for the Halloween weekend. The event brings thousands of riders to “share their passion for off-roading,” according to a Polaris spokeswoman.

“As much as our hearts are pulled toward Glamis and we will miss riding through the dunes and hanging out at Oldsmobile Hill, we look forward to celebrating our riding family in new and different ways this year,” according to an email from Jessica Rogers with Polaris. “We look forward to hosting Camp RZR in Glamis next year when circumstances permit.”

Next
Calexico Father-Son Remembered for Impact on Others