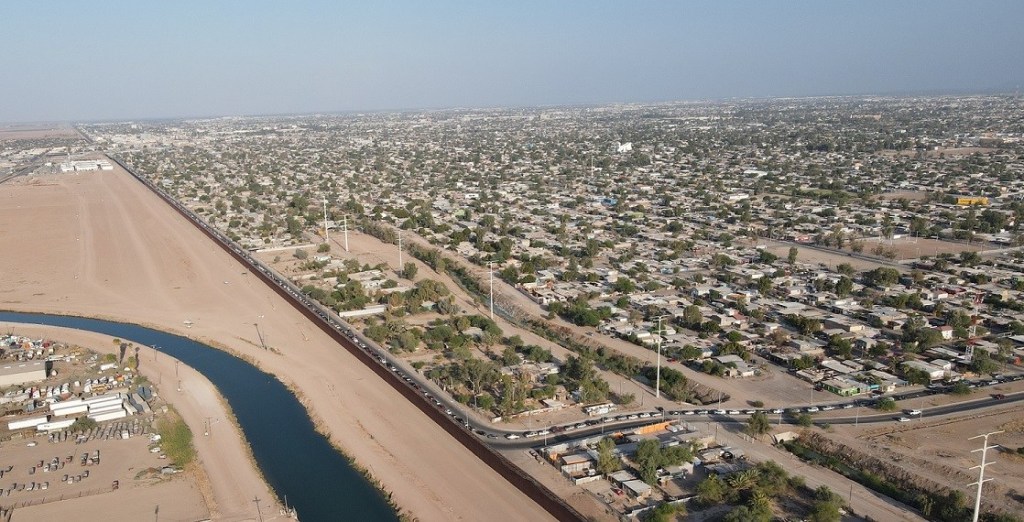 An aerial drone shows the backed-up traffic trying to enter the United States through the Calexico West Port of Entry around 5:45 p.m. Aug. 23. Customs and Border Protection on Aug. 21 quietly undertook a new policy slowing nonessential travel into the U.S. to limit COVID transmissions at Calexico and San Diego-area ports of entry. The actions snarled northbound traffic for up to eight hours in Calexico, officials said. | ANGEL ESPARZA PHOTO
Home
Regional News
In Regional News

CALEXICO — Imperial County officials want to know why they weren’t notified ahead of time about changes at the Calexico West Port of Entry.

In a letter dated Aug. 27, the Board of Supervisors asked to be more involved in decision making when it comes to border-crossing decisions that could negatively impact the Imperial Valley economy. The issue dates back to an Aug. 21 decision by the U.S. Customs and Border Protection to limit resources during peak times for nonessential travel at the Ports of San Ysidro, Otay Mesa and Calexico West.

Further, a Calexico man commented on social media over the weekend that his father had died from heat exhaustion Aug. 27 after being in line for several hours. He posted the statement on an online version of an initial story about the northbound border lines that appeared in the Aug. 27 edition of the Calexico Chronicle.

“My dad passed away on Thursday from heat stroke waiting in line. He just crossed the border and made it to the house and passed away in the driveway,” wrote Rodolofo Lizarraga Seanz on the Chronicle’s Facebook page.

Seanz did not respond to several messages from a reporter.

Calexico Police Chief Gonzalo Gerardo confirmed that a man was found dead in his driveway in a vehicle that day, adding that while he appeared to succumb from the heat, he did suffer from other health-related conditions.

Meanwhile, federal officials have said the changes to traffic flow at the ports aims to reduce the amount of nonessential travel crossing the border as a way to slow the spread of COVID-19 in the United States. The change in operation led to what was reported as up to a seven-hour wait at the Calexico West Port of Entry.

Those long waits, especially unexpected ones, can have an impact on the local economy, according to county staff.

“Although border-crossing delays are continually an issue for the agricultural industry, since August 22nd, in an unofficial survey, farmers reported an absentee rate of approximately 15 percent due to long waits at the border,” according to the letter from the county board to federal officials. “Any changes or modifications made at the POE directly impact our local economy, and it is imperative that the county of Imperial is informed with advance notice to prepare for the impacts or to be given the opportunity to provide input prior to the implementation of any changes, so that the direct and indirect impacts are considered.”

The Board of Supervisors is also looking to clarify what federal officials consider “peak times” for non-essential travel across the border and how staffing levels have changed compared to pre-COVID staffing.

The letter was sent to the director of field operations in the San Diego region for Customs and Border Protection, and copies were also sent to federal elected representatives.

Victor Carrillo, who was representing the Calexico Chamber of Commerce, addressed the county board about the border wait times during public comment at the Aug. 25 county board meeting.

He asked that the board address federal officials about the need in the Imperial Valley to get people through the lines quickly.

“We have triple-digit weather five months out of the year,” he added. “(After) 20 minutes we used to protest. When it became two hours, that became the norm. But now, six to nine hours, that’s inhumane. We can’t put our residents and the people that live in both Imperial and Mexicali valleys under those dire conditions.” The San Diego Union-Tribune reported an 87-year-old woman suffered a heart attack and died Aug. 23 in her car while waiting to cross into San Ysidro, according to Tijuana police.

Previous
Calexico Father-Son Remembered for Impact on Others