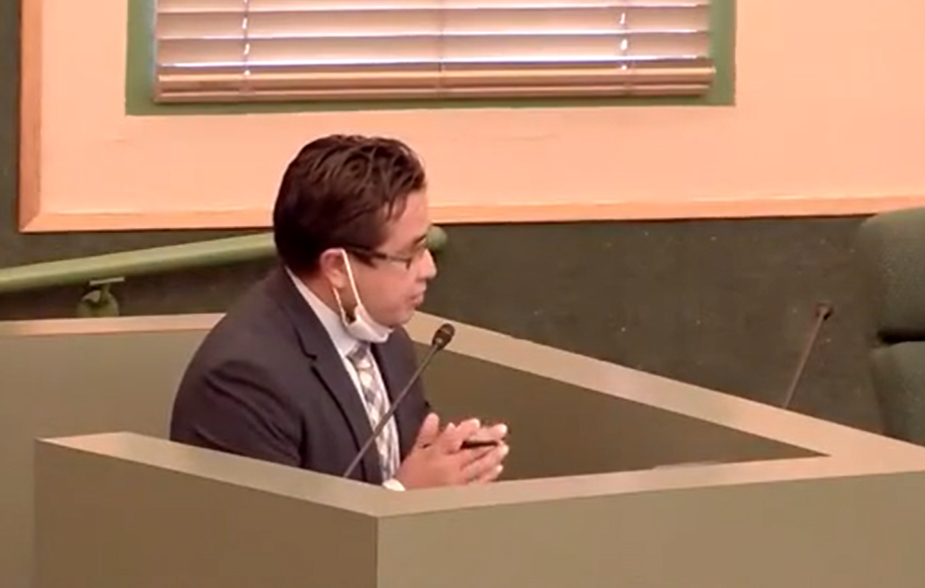 Calexico City Attorney Carlos Campos addresses the Calexico City Council on Aug. 26 regarding its options for an eviction moratorium the city was contemplating to protect renters during the COVID crisis. | SCREEN CAPTURE
Home
Regional News
In Regional News

CALEXICO —Although a local social justice group is pleased to see a legislative compromise struck Sept. 1 that protects renters from being thrown out onto the streets, a spokesman for the group believes the law let Calexico and other local leaders off the hook for not taking care of their own.

“Yet again, it took intervention from the state government to protect local residents, as local officials refused to act,” according to a partial statement from the Imperial Valley Equity & Justice Coalition. “Calexico and Imperial County cities failed to enact the most basic protections for their most vulnerable.”

Jose Flores, spokesman for the group, said since April cities and counties in the state have had the authority to enact local eviction moratoriums to protect renters in the state impacted financially from job losses due to the COVID pandemic from being evicted from their homes and places of business.

Over the last several weeks, the coalition was trying to work with the city of Calexico to become the first and only city in Imperial County to enact its own moratorium, providing a sample ordinance and reaching out to council members and city staff to discuss the issue.

The county of Imperial had already approved such a moratorium, and extended it once, but it only applied to unincorporated areas of the county.

Gov Gavin Newsom signed Assembly Bill 3088 on Sept. 1, a compromise of two bills making their way through the Legislature, one from the Assembly and one from state Senate.

Under the new legislation, which went into effect immediately, tenants who pay at least 25 percent of their rent from Sept. 1 through Jan. 31 will be protected from eviction. However, those who fail to meet the minimum rent payment could be removed beginning Feb. 1.

The extension also gives tenants a reprieve on unpaid rent between March and Aug. 31 but allows landlords to sue for the back rent during that period beginning in March 2021.

To qualify for the protections, tenants are required to sign a declaration affirming a COVID-19 hardship.

The bill also extends some foreclosure protections to owners of rental property of four dwellings or fewer that also meet “certain criteria, including that a tenant occupying the property is unable to pay rent due to a reduction in income resulting from the novel coronavirus.”

Although the coalition provided Calexico officials with information in late July, the moratorium was not placed on an agenda formally until Aug. 26, and even then, it was for an informational-only presentation by Calexico City Attorney Carlos Campos. Not action could be taken.

Flores said he was most disturbed by the lack of urgency the issue was given by the entire Calexico council, which only had one member that wanted to see the ordinance passed in short order, Bill Hodge.

What’s more, Flores said he thought that the more than a dozen community members who called in or emailed messages to the city to express a need for such a moratorium were met with no engagement by council members.

“There was a lot of anguish, and a diverse set of people expressing their opinions,” Flores said. “But there was no engagement with them.”

With a core group of the coalition hailing from Calexico, Flores said the group mistakenly assumed the Calexico council would be the most progressive in trying to get some sort of ordinance passed.

At the time of Campos’ presentation to the council Aug. 26, some 50 percent of the state’s population, or 20 million California residents, were under some form of protection from moratorium ordinances.

Residents like Mark Jacobo of Calexico, who identified himself as a renter in the city, said some 46 percent of Calexico residents were renters. He implored the council for a “speedy” adoption of an ordinance.

“The integrity of any community is based on how well the less fortunate are treated. There are people in our community being evicted not because they lack work ethic, but because they lack the support of local government during these trying times,” said Calexico resident Crystal Cortez.

Hodge asked that the issue be brought back to the Sept. 2 City Council agenda, but Campos and other city officials didn’t think there was enough time to get alternative ordinances prepared, so the issue was pushed back to Sept. 16. Now, action is no longer necessary.

Still, Flores said he is hopeful that the council will at least take a proactive role in using its resources and abilities to make certain Calexico residents are made aware of their protections under the new bill.