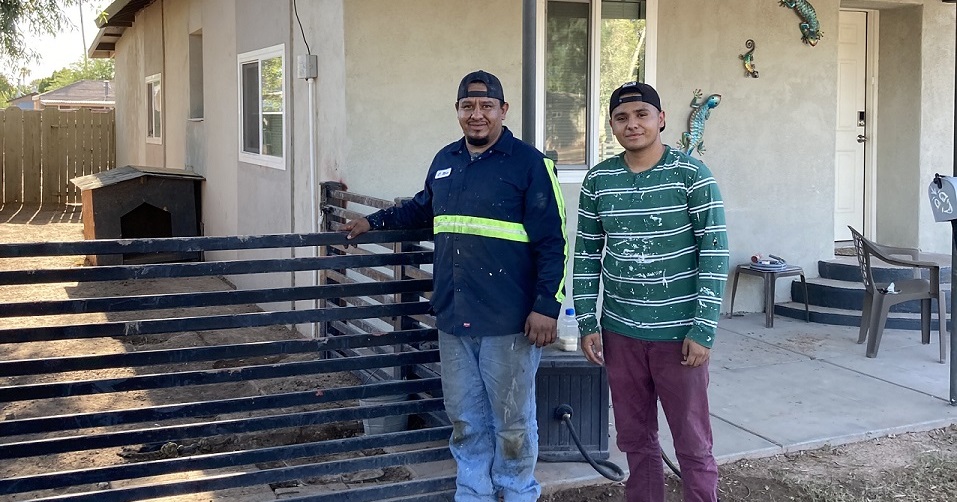 HOLTVILLE — With Holtville resident Carmelo Meza working nights at an essential job, he doesn’t get to spend too much time with his children during the week when they are in school.

However, during the month of August, Meza and his eldest son, Kevin, could be seen working on a project together, installing a fence around their front lawn.

This is a rare sight to see, a father and his teenage son working together, especially in the scorching August temperatures. It’s a reminder that the simple things in life are what matter; those special times when one can look back and see what was accomplished when the family is united with a purpose.

Kevin, who is 19 years old, recently graduated from Holtville High School and is now at home during the day, where he spent one to two hours a day with his father until the fence was complete.

Life Can be a Maze

Carmelo had planned the fence project about six months ago, but work did not allow time to complete it. When the time did avail itself, there was COVID, the high summer temperatures and other challenges.

Just like a maze, they felt trapped at times and had to go back or take a different route.

“We did it (the fence project) in spurts when I was out of work. Calculating the total hours done, it was probably about a solid three weeks’ worth of time. I wanted to finish faster because of the heat, but due to COVID, sometimes the materials were not available, that was the stress. I had to have patience,” Carmelo said in Spanish.

This was a chance to work on a project with his son and impart some valuable life lessons.

Carmelo and his wife, Cathy, have two children: Kevin and Ryan, who is age 13. The Meza family have been residents of Holtville for the last eight years.

“We are a united family. We communicate, go on outings, and eat together as a family,” he said.

Being a successful parent requires the ability to discern the differences between each child, knowing that each one is unique and wired differently than the other.”

“(We) try to give them what they need personally and for school. I am proud of my kids, they are good children; studious, no problems,” he said.

Without knowing it, Carmelo was teaching his son about project management from planning to completion, an important process that can be used throughout life.

The Journey is Half the Fun

“Sometimes I would take out materials needed, and my son would say it is going to come out wrong. We would discuss it a bit. I had in mind the best and easiest route to do what we needed to get done. When I explained to him the steps, then he would understand,” Carmelo said.

“Fortunately, we finished the installation before the high heat wave,” he added.

Kevin was asked about some of the lessons he learned from the experience, and how he can apply those to life.

“He (his father) found tricky ways to handle the heavy metal without any effort or help. Finding ways of figuring out stuff would be what I can apply to the future. I learned to think stuff through and find easier ways to work or that it will facilitate whatever I’m doing,” Kevin said.

“He sees things in a way that I don’t understand, and he is a handyman. He knows how to do everything; any type of work comes easy to him. To me, not so much,” the son said.

Kevin goes on to say he admires his father, because “literally anything you can think of, he can do it, and I am just an average person and I wouldn’t consider myself really good at anything.”

“I have always told my son, ‘be better than me, study, and have a career to live a better life than I have,’” Carmelo said.

Carmelo’s dream is for his kids do better than he has. “My goal,” Kevin said, “is to finish a career in a major that I have not chosen yet.”