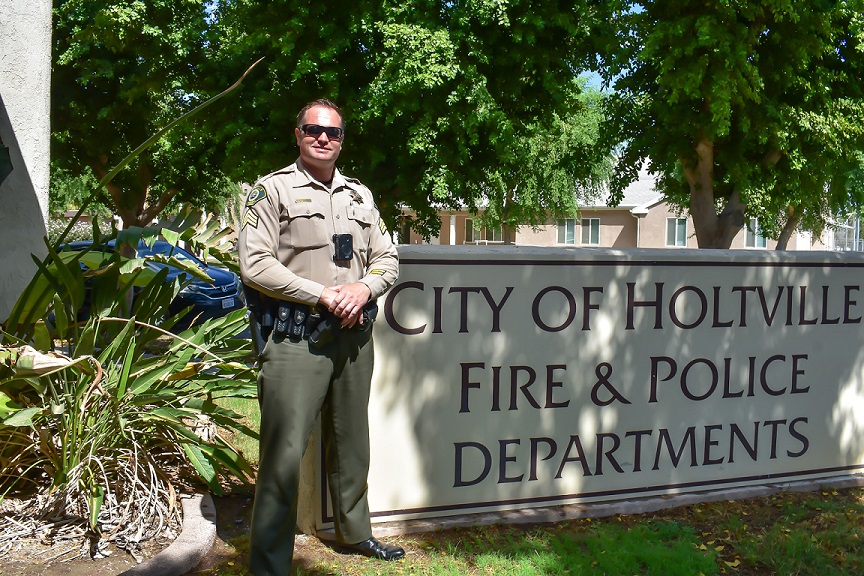 HOLTVILLE — From managing a department’s budget to responding as back up during patrol calls, Sgt. Roy Patterson with the Imperial County Sheriff’s Office has spent the last few years adapting to leading law enforcement efforts in Holtville.

“Holtville honestly is one of the most supporting communities I’ve worked in,” Patterson said. “It’s a really refreshing kind of community to work for because there is a lot of negative publicity out there, and we are here trying to do the best we can to serve the community.”

For three years, Patterson has held the title of police chief. He joined the Sheriff’s Office around the same time it first became contracted with the city of Holtville to serve as the community’s police force back at the start of 2010. The department has since continued to provide “professional police service” to the city, according to the Sheriff’s Office webpage.

“The next couple years I see myself here, hopefully as long as my department and city agree with it,” Patterson said with a smile.

Born in St. Louis, Missouri, Patterson was the son of a traveling salesman who often moved his family around. For a time, they even traveled across the North Atlantic Ocean to England, where they lived for five years before returning to the United States to settle down on the East Coast to finish Patterson’s high school career.

“I always remember in high school my thing was either going to the military, and then I just wanted to be in law enforcement,” Patterson said.

Not long after graduating from high school in 2003, Patterson followed his dreams and enlisted in the U.S. Navy. Actively serving for more than five years, Patterson’s military career led him to spend several years stationed at Naval Air Facility El Centro. His current rank is as an E-6 1st Class Petty Officer.

“Technically, I’m still in because I am in active reserves,” Patterson said. “I’m now in my 17th year, so I have two and a half more to do, then I’m done with my 20 years.”

A year after leaving the military, Patterson joined the Imperial County Sheriff’s Office and was attending the academy by the summer of 2009.

“The Sheriff’s Office here were the ones that gave me the first shot at law enforcement on the civilian side,” he said.

Patterson has been with the Sheriff’s Office for the last 11 years. Four years of which he spent working South County patrol in Seeley, Heber and the rural areas of El Centro, Imperial, Calexico, and Ocotillo and another four years he spent patrolling the office’s East County operations in Winterhaven. Patterson’s most recent three years with the Sheriff’s Office have been in the city of Holtville as the acting chief of police.

“I still respond to calls, but it’s different because you see more of a political and even financial way of having to patrol and supervise things,” Patterson said of his position in Holtville.

Patterson and his team, which includes two senior deputies and three sheriff deputies operate out of the Holtville police substation building at 585 Fern Ave. The group patrol in shifts during the day and night, with swing shifts added during peak hours, Patterson explained.

“It is very rewarding when you get to go out there and actually see that the community accepts you,” Patterson said of the Holtville community. “The community sees the work you put in to arrest someone that is either transporting narcotics through the city or responsible for burglaries or vandalisms and they’re thankful.”

Since leading the city’s law enforcement efforts, Patterson has taken on responsibilities that go beyond the average sergeant deputies including budget planning, City Council meetings and community-related events.

“I do all the same sergeant duties, like reviewing the reports, people’s timecards, citations and all that,” Patterson said. “You also go to City Council meetings, management meetings; there’s a lot more stuff that’s entailed then just the regular patrol sergeant working south county or north county beat.”

When it comes to the more challenging aspects of the job, Patterson said finding the balance between serving the community and enforcing the law is his main objective.

In doing so, Patterson and his deputies have tried to work more with informing the community of new city ordinances rather than enforcing them strictly.

“There have been a couple city ordinances that have been new to the city the last couple years, like the one about not being able to park on your lawn,” Patterson recalled. “Instead of just citing everyone that had a car parked on their lawn, it was like, no, let’s go out there and try to inform them.”

In support of this process, the city created flyers the deputies were able to place on windshields and car doors that explained the new ordinance passed and how the deputies would be waiting 60 days before fully enforcing the policy. They also issued first and second notices to residents who failed to move their cars, he explained.

“You still have people that don’t do it and they complain and get mad when they get cited, but for the most part that’s where I see the biggest challenges are,” Patterson said.

In response to the department’s efforts, Holtville residents have made Patterson and his deputies feel welcomed as they patrol the community, some have even brought the station baked goods as a thank you gesture.

“One of the big rewarding things is going out in the community and actually seeing them embrace you and being appreciative of what you do,” he said. “Then you feel like you’re doing the right thing and helping the community you serve.”

Patterson has been able to juggle the highs and lows of his job as police chief through the help and support of his family.

“They are very supportive of me,” Patterson said. “They’ve been very understanding, which I think is the biggest thing that helps me get through it.”

Patterson and his wife reside in Calexico, with their four children. Their oldest daughter is 22 years old and recently graduated from the University of California, San Diego this past spring. Their next daughter is 19 and entered her second year at Imperial Valley College this fall. They also have a 17-year-old daughter who recently graduated from high school and has since begun classes at IVC, along with a 13-year-old son who just started the eighth grade.

“It can be very stressful on the family life, but luckily I have a pretty good supporting crew that understands what it takes,” Patterson said in reference to his family. “It’s about making the quality time when you are home, because this job will keep you away.”

Often missing family holidays to work, Patterson and his family have adapted to the demands of his job by scheduling celebrations around times he’s available and understanding that his shift may not last a regular 9 a.m. to 5 p.m. schedule.

“One of the biggest things in law enforcement for family-wise is that it’s not like a regular job when it’s 5 o’clock you’re punching out and going home, no matter what’s happening,” Patterson commented. “In law enforcement you don’t get to just punch out and say, ‘hey, it’s in chaos right now, but I’m going to go home.’”

Patterson said that sometimes in finishing a call that requires someone to be booked into custody, he will have two hours of extra paperwork to do before heading home for the day. Despite these demanding hours, Patterson hopes to continue his future with the city.

“I really like it here and I’ve let my supervisors know that,” Patterson said of working in Holtville. “I really like the aspect of what I do out here with the people and connections you make.”

Patterson hopes to continue to inspire community members to work with him and the Sheriff’s Office as they patrol the streets of Holtville.

“A lot of the crimes that are solved are through community policing with having the community as your eyes and ears,” Patterson said. “So, I encourage people to call us with any questions, if they see something going on let us know.”

He went on to explain how community support not only makes the job is more enjoyable, but it can also be vital to the work the Sheriff’s Office does. Patterson has heard from residents who saw something but chose against calling the department for whatever reason and hopes more residents will trust in the department to call them if they see or hear something that requires deputies’ attention.

“We really appreciate the overwhelming support they’ve treated us with here,” Patterson said. “We can’t always be at every spot at the same time … so my thing to the community is, if you see or hear something call us.”

To reach out to the Sheriff’s Office about a tip or to discuss any other law enforcement matter, contact the office at 760-356-2991.