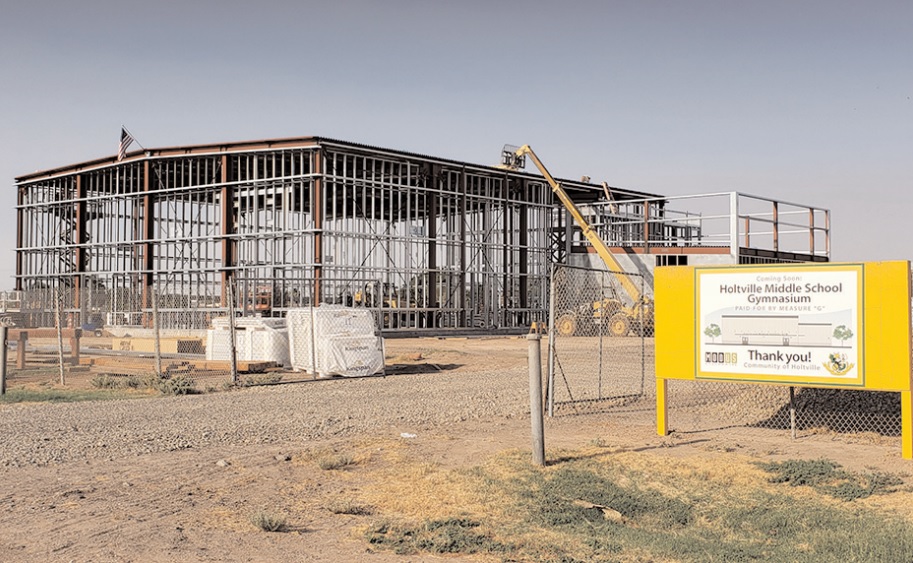 HOLTVILLE — As Holtville students continue to learn from home, renovations to the local middle school’s new gymnasium are underway following a two-year effort to upgrade parts of the facility.

“Unfortunately, this project has seen some delays due in part to the COVID-19 crisis,” John-Paul Wells, assistant superintendent at Holtville Unified School District, said of the renovations. “Because of these delays, we believe the project is likely to be completed by February 2021.”

The construction project was initially planned by the school district in November 2018 as a way to address the growing need to improve the quality of certain school sites. To fund these efforts the district placed Measure G, a $10 million general obligation bond program, on the ballot that year, Wells explained.

Given that Measure G is a general obligation bond, it will have to be paid over a 25- to 30-year period and is expected to be repaid through an increase in property taxes on the properties within the school district’s boundaries. Based on Imperial County’s valuation, Holtville Unified plans to issue bonds that would increase property taxes by $40 per $100,000 of assessed value per year, according to a district fact sheet.

“Things definitely began moving after the community approved Measure G, giving us the green light to pursue this project,” Wells said. “In early 2019, we at the district began researching different construction methods for pre-fabrication gymnasiums.”

By March 2019, the district had already decided on the building type that fit both the district’s needs and budget and were able to bid for the design and construction of the building, Wells explained.

“Unfortunately, due to a complicated approval process and some site prep work we had to do to conform with geological requirements, we were not able to begin construction until February 2020,” Wells said. “Since then, the construction contractor has been making great progress at the site in spite of all the challenges, such as work crew and supply shortages brought on by the COVID-19 crisis.”

Ward’s first official teaching job was at Holtville Middle School and he remained at that school for his entire 33-year career teaching physical education before retiring in 2010, according to a 2016 obituary for Ward following his death at the age of 68.

Beyond the new gym, field lighting improvements for one soccer field on the southeast side of the campus is also planned at Holtville Middle School, Wells noted. This upgrade is expected to benefit the local Little League, Pop Warner, soccer leagues and Holtville High School team practices.

“The most important thing I would like the community to know is that we at the school district are just so appreciative of the trust we have been given through the passage of Measure G,” Wells said. “We are working very hard to earn this trust by putting these funds to good use in as efficient a manner as possible.”

The total project cost is expected to be substantially lower than what most other schools have had to spend to construct middle school gyms because the district decided to choose prefabricated construction, which is a construction process where some building elements are built off-site and when completed, shipped to the construction site for installation, explained Wells.

“There are so many people working hard behind the scenes on this project,” Wells said. “Many have contributed so much time and effort to making this project possible for our community.”

The primary contractor for the Holtville Middle School project is ESR Construction, which is working with Greg Cox of GA Cox Construction, Wells explained.

“The architect of record is Pedro Newbern from Pasadena, who has been a tremendous help to the district,” Wells said. “We also could not have gotten this project moving if not for Mr. Craig Rush and his team at the Division of State Architect.”

Holtville Unified has also eyed additional improvements to other school sites including a new cafeteria, gym and multipurpose room for both school and community use at Holtville High School, a student services modular building at Pine School to increase counseling and speech therapy services and modernizing and renovating classrooms and offices at Finley Elementary School to increase school safety, according to a district fact sheet. “We are hoping that once this project is completed, the economy will be recovered enough to issue the remaining Measure G bond funds, so that we can continue on to the rest of the projects we would like to complete,” Wells said.

Next
CAMPAIGNING DURING COVID