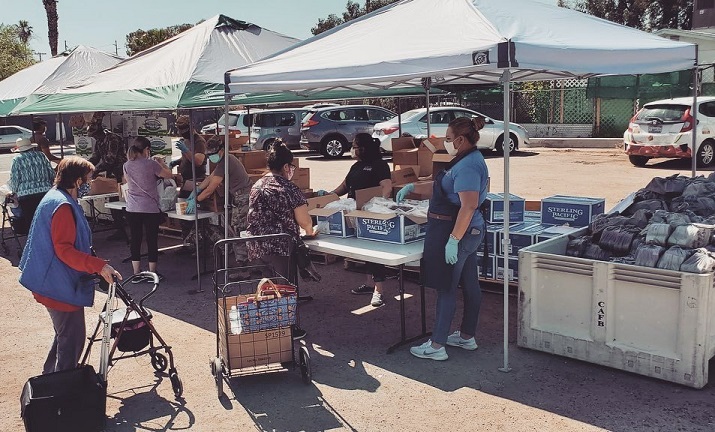 The Imperial Valley Food Bank feeds numerous families and individuals during a food pantry distribution in the Kennedy Gardens area in Calexico on April 28. Since layoffs and businesses closures due to social distancing, more and more people are in need of food from the I.V. Food Bank. | COURTESY PHOTO
Home
COVID-19
In COVID-19Regional News

The COVID-19 pandemic has dramatically heightened ongoing food insecurity: 14 million U.S. children will go hungry in any given week, and parents are increasingly skipping meals for several days to feed their children.

Some 5.5 million elderly people are also struggling to find sufficient food in the world’s wealthiest country, according to information and data shared during a panel discussion by San Francisco-based Ethnic Media Services on Aug. 28.

Pre-pandemic, 37 million people, including 2 million children, chronically suffered from food insecurity. Over the past five months, as U.S. unemployment levels hit highs of 11 percent to 16 percent, 54 million people are now facing chronic hunger. Food banks and pantries aiming to fill the gaps often find themselves short of food. They are faced with the additional challenge of developing novel ways to distribute food as much of the nation still remains under stay-at-home orders.

Locally, the Imperial County Food Bank served about 4,500 individuals and 1,350 households in Calexico in July, the most recent numbers immediately available.

“We have four different distributions in Calexico each month, some of which we have taken over since the beginning of COVID,” said Stefanie Campos, marketing and communications manager for the food bank.

“It is an especially difficult time in our Valley as the heat could also be a determining factor in our numbers during the summer; however, residents will line up hours before just to be in line for the commodities distribution.

Meanwhile, people of color, including Blacks and Native Americans, are suffering from hunger at two and a half times the rate of Whites, said Ami McReynolds, chief equity and programs officer at Feeding America, a nationwide network of 200 food banks and 60,000 food pantries.

“The pandemic has caused a higher demand for food, and there is a lot less food, and fewer places which offer it,” said McReynolds, speaking at an Aug. 28 briefing organized by Ethnic Media Services. She said that hunger was particularly prevalent in Southern states and on Native American reservations.

Other speakers at the briefing were Rev. David Beckmann, president emeritus of Bread for the World, who received the World Food Prize in 2010; and Jovanna Lopez, founder of The People’s Nite Market in San Antonio, Texas.

Redlining, which McReynolds described as a tool for perpetuating systemic racism, keeps low-income people of color in poorer neighborhoods, and in food deserts with a lack of grocery stores. A lack of public transportation in such neighborhoods denies people the ability to access fresh, nutritious food, she said.

Sadly, some of the people now in line for groceries at food banks and pantries were once volunteers and donors, said McReynolds, noting that food insecurity has cut through the middle class during the pandemic.

Federal programs, such as the Supplemental Nutrition Assistance Program and Women, Infants, and Children must be expanded during the pandemic and beyond, she said, urging people to call their congressional representatives to advocate for the programs.

The Trump administration’s implementation of its public charge rule has had a chilling effect on food insecurity, said Beckmann, of Bread for the World. Public charge denies permanent residency to immigrants who have received any form of federal aid. While the rule does not factor in programs like school lunches, which are federally funded, many immigrants have nonetheless dis-enrolled from those benefits, fearing they will be denied permanent residency.

“A lot of people don’t know what counts and what doesn’t, so they would rather not do anything, not even get help from food banks,” said Beckmann. He advocated for a path to citizenship for undocumented people, who receive no federal assistance, and are thus the most vulnerable to chronic hunger.

Increasing SNAP and WIC benefits will yield fruit in three to four years, he said, echoing McReynolds in the need to promote economic recovery during and after the pandemic.

“The progress against poverty is something that will not end just by giving hungry people food. What needs to happen is for people to be able to earn, to get food.” said Beckmann, voicing the need to invest in opportunities for Black people, to generate good jobs and income.

Poverty and hunger could be eliminated in as few as eight years, he said, if lawmakers put their minds to resolving the twin crises.

“People don’t know the scale of this. Even when we know it, we simply say, ‘Oh well, that’s happening to them, not us.’ It is a spiritual problem; I don’t think we care enough,” said Beckmann.

Lopez, of the People’s Nite Market in San Antonio, said she started her initiative in 2015, when she found that local food banks were giving out food that was already spoiled. “This was not healthy for our Native, Black and Latin communities,” she said, adding that the only farmers’ market in town was rather ritzy and did not take food stamps.

“That’s when we realized we had to come up with something else for the community to get access to fresh fruits and vegetables, because we definitely didn’t have anything like that being done,” said Lopez.

The People’s Nite Market is a grassroots effort relying solely on donations of “a dollar here, a dollar there,” according to Lopez. As the pandemic hit the U.S., the young activist and her team were able to secure $600,000 to be able to feed 150,000 families.

Their efforts often fall short. “Sometimes there are a lot of people that we have to turn away because we run out of food. That makes us really sad. Our local government wasn’t prepared for this and neither was our food bank,” she said.

Lopez has been working to develop community gardens, which would allow people to grow their own fresh food. She has one 4-acre plot of land, which the city has leased to her for $1 per year. Expanding the program has been challenging, she said, noting that even small plots can cost upward of $20,000, a daunting sum for a grassroots initiative.

Next
California Census Leaders: “We Have 30 Days to Make a Difference”