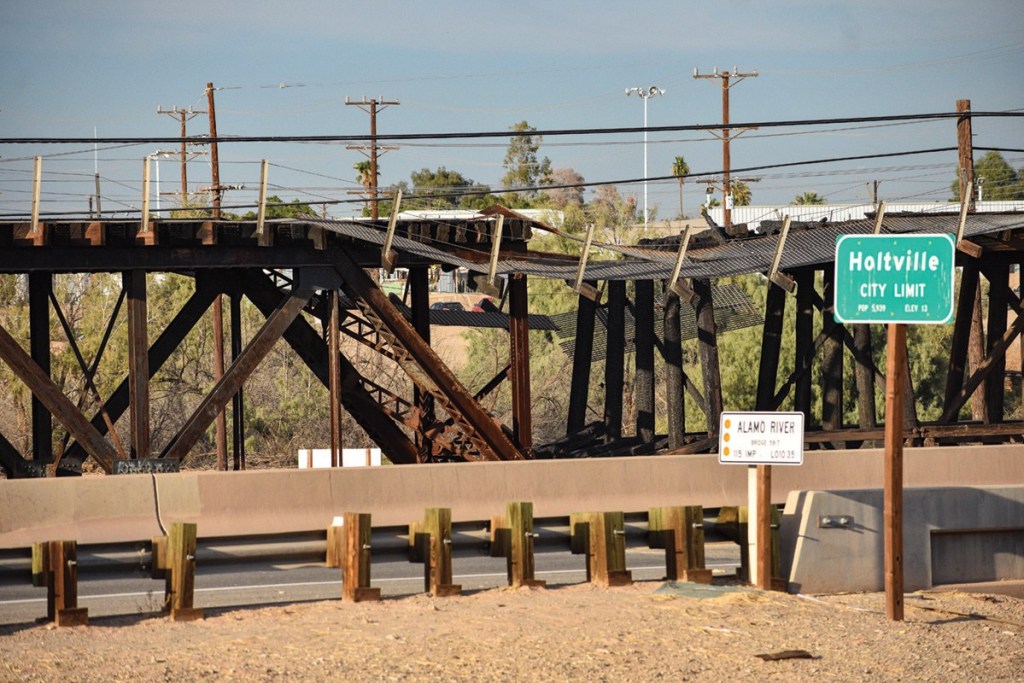 Long a local landmark and informal greeter for Holtville, the former railroad trestle over the Alamo River was damaged in a fire more than 10 years ago.
Home
Featured Stories
In Featured StoriesLocal News

HOLTVILLE — The charred and abandoned railroad trestle bridge that stands near the city’s entrance moved one step closer to becoming a recreational retreat for local residents with the city’s approval of a resolution to secure grant funding for the project.

“Restoration of the trestle bridge would give the public more recreational opportunities within the community,” explained Jeorge Galvan, Holtville city planner, within the city’s report of the project.

Holtville City Council members approved a resolution during its Sept. 14 meeting as part of the third phase of the application process for the Recreational Trails and Gateway Grant Program, which the city applied for last year through the California Natural Resources Agency.

“Proposed improvements include the repair of the bridge structure, pedestrian decking and landscaping,” Galvan stated in the project’s report.

The city applied for $1,262,000 in grant funding to repair the more than 100-year-old trestle bridge located west of Highway 115 near the Alamo River bank. The city intends to renovate the bridge into a recreational area for the community, Galvan explained in the report.

Along with the grant funding, the city also hopes to utilize $720,000 from a settlement following a fire that caused structural damage to the city-owned trestle bridge.

The fire was sparked by welding done by a nearby packing shed owner, who was later sued by the city for damages to the trestle bridge, City Manager Nick Wells said during a Nov. 14 interview with this paper.

Beyond those local cash funds, the city also has a budget of $9,000 in local in-kind funds that will be used to alleviate the total project cost, according to city staff reports.

If the city does receive grant funding from CNRA, it will combine it with both local funding options to complete the proposed recreational trail in about two years, Galvan stated in the report.

A majority of renovations include repairing the trestle bridge and installing pedestrian decking for the trail to connect to the Pete Mellinger Alamo River Trail. Landscaping, benches, and signage is also planned to be installed along the trail pathway leading up to the trestle bridge, planning reports note.

The proposed trail would flow into the existing Alamo River Trail, which runs underneath the bridge and connects to Palm Avenue on one side and Earl Walker County Park on the other.

The city hopes the trails will ultimately connect to the Holtville wetlands, according to city planning reports.

The city’s trestle bridge project was first approved to move past the proposal phase into round two of the grant application process by CNRA early this year, Galvan stated in his report.

A virtual site visit was attended by representatives of the state agency, city staff and members of the Holt Group on July 7 in order to conduct phase two of the application process. The virtual visit consisted of a PowerPoint presentation highlighting connectivity between the existing Alamo River Trail and the proposed Holtville Alamo Wetlands, according to city planning reports.

“CNRA conducted various virtual site visits throughout the state and has further refined the applicant pool,” Galvan noted in his project report.

The third phase of the Recreational Trails and Gateway Grant application process requires the city to submit additional documents to CNRA including environmental compliance, funding plan, site control, timeline, consultation with the California Conservation Corps and a resolution from the City Council approving the application, which the council has since adopted.

“All documents submitted will then be reviewed by CNRA and recommendations for funding are submitted by CNRA staff to the California Secretary for Natural Resources,” Galvan explained in the city’s planning report. “Upon approval by the Secretary, grant awards are then announced for successful applicants.”

In looking toward the future, Wells has mentioned that although repairing the trestle bridge to make it walkable is the short-term plan, a long-term vision for the city would be to have a side road available from the bridge to lead from the Barbara Worth Country Club to the city to allow golf carts to travel safely into Holtville.

In an effort to provide small businesses with some economic relief during the pandemic, the city also approved a resolution that would allow any Holtville-based for-profit and nonprofit businesses with 15 or fewer employees the opportunity to waive monthly sewer service charges during the duration of the COVID-19 economic shutdown, according to city manager reports.

“Although several have recently been able to reopen in some capacity, many of those establishments remain shuttered with little or no revenue stream,” Wells explained in his report to the council.

To qualify, all eligible businesses must have a current valid Holtville business license, must have experienced a loss of income due to the COVID-19 shutdown on or after March 17 that resulted in hardships in paying bills to local utility service provided between March 17 and reopening, according to the report.

“As the number of affected businesses is not large, minimal loss of revenue to the sewer fund” is expected for the city, according to Wells’ report.

Applicants’ average monthly water usage must not exceed 6,000 gallons and businesses must not have received other funding under the federal Coronavirus Aid, Relief, and Economic Security Act or similar sources that provide for utility assistance, the resolution outlined.

Previous
California Census Leaders: “We Have 30 Days to Make a Difference”

Next
COVID Casts Change on Commemoration of 9/11, ‘Patriot Day’