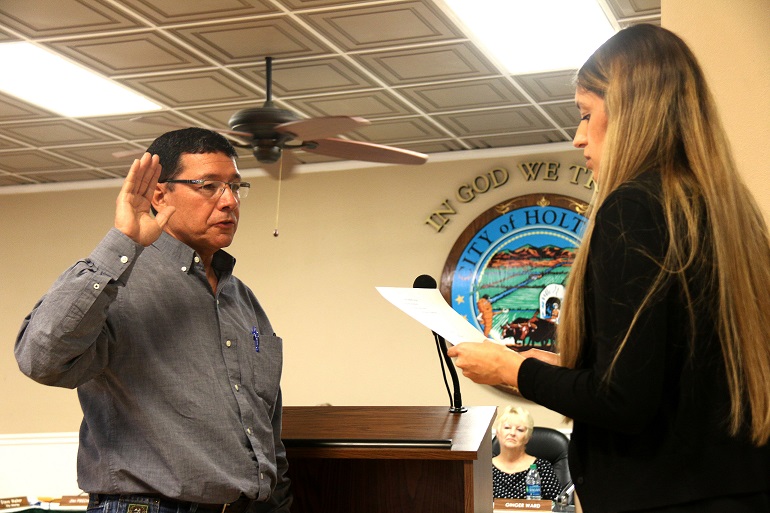 HOLTVILLE — In a small city where department heads often wear multiple hats, Holtville City Manager Nick Wells has again returned to one of his initial roles with the city as its finance supervisor, only this time with duties of city clerk added in for good measure.

Sept. 22 was the final day on the job for finance supervisor Kariza Preciado, who started a new position at the Imperial County Office of Education on Sept. 24, Wells said.

After two and half years with the city, Preciado had also fallen into the job of acting as the city clerk. All of those positions will now fall to Wells as he looks to find Preciado’s replacement.

“In Holtville, we’re lower on the salary scale than most (cities). When we get really good people, we know they’re going to move on at one point,” he said.

Although Wells considers his No. 2 to be Holtville Fire Chief Alex Silva, he often looked to Preciado to “ride herd over things in the administrative office” when he was gone.

In her most recent report to the Holtville City Councill dated Sept. 10, Preciado bade the city farewell.

“After careful consideration I have decided to continue on my career journey with the Imperial County Office of Education beginning Sept. 24. … I would like to thank each and every one of you for the experience to serve Holtville. Thank you for the support, guidance, and encouragement you have provided to me during my time here at the city of Holtville. It has been my honor and will miss you all dearly. Thanks again for everything. I wish you all the best. Fight on!”

Wells said that although she was a “Spartan” (or a graduate of Central Union High School in El Centro), Preciado was considered an honorary Viking.

The city manager advertised for her replacement and had already received about a dozen resumes as of application deadline Sept. 18. Rate of pay for the position was listed as $22.23 an hour. Wells said a panel will be set up in the next two weeks to present him with the top-three candidates for the job.

Wells, who came to work for the city in 2011, started out as finance supervisor, a position he held until he became permanent city manager in October 2014. Since then, he said a few finance supervisors have come and gone, and Wells regularly rotates back into the position. Most recently, he filled in for Preciado last year when she was on maternity leave.

What will add to Wells’ workload this time around will be the fact that Preciado had been pulling double duty of late as city clerk. With a municipal election coming up Nov. 3, one of the city clerk’s chief duties will be to certify the election.

Wells said the council will have to officially act to designate him in that role at an upcoming council meeting.

Fortunately, he said, some of Preciado’s duties can be spread around. Some of her finance supervisor duties, including overseeing accounts payable and billing functions, have longtime, experienced employees in place.

And some of the city clerk functions, such as taking notes at meetings or processing public records requests, can be handled by other employees, Wells said.

In her most recent council report, Preciado reported as of Aug. 20, that the general fund budget had a $602,427 revenue deficit.

“This is in part due to regular business activity. Revenues from other agencies trend to come in around October for the current fiscal year. (Firefighting) strike team has been called out a few times in the past two months and is currently at a strike team fire in Southern California. The payments for strike team usually take the state months to reimburse,” she wrote. Wells said that is the normal course of business in California, where payments and reimbursements for things like sales tax and vehicle license fees start to come in later, and he said COVID will likely delay payments to cities even further.