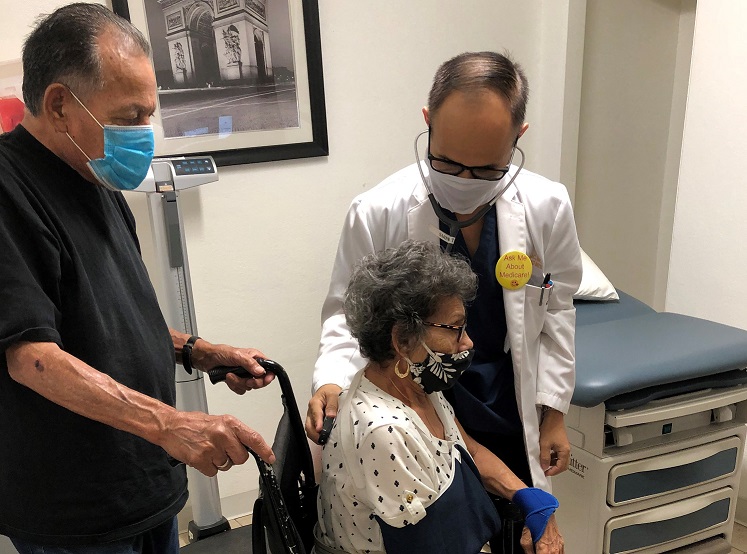 HOLTVILLE — A close-knit community like Holtville is fortunate to have a local physician among its ranks, especially one with a pedigree like that of Dr. Vincent V. Soun.

What he brings in big-time accomplishments and experience, though, is made more impressive by some of his small-town touches, like being able to visit his office without an appointment or the fact that he makes house calls.

“My daughter was very ill,” said Rosie Allegranza, Holtville Chamber of Commerce manager. “We just walked in and didn’t have an appointment. He was really nice and welcomed us and took us right in. (He) did lab work and put (my daughter) on an I.V., and she is feeling so much better now.”

Allegranza said her husband also went into Soun’s office for a COVID-19 test.

Soun even offers home visits for Medicare patients, which is unheard of these days.

“I have interacted (on a) one-on-one level with Dr. Soun, and I can say that he genuinely cares for the patient’s health,” Anuj Shukla, owner and pharmacist at Parkers Pharmacy, said of the physician. “From my point of view, he is very friendly, very helpful all the time and so is his staff.”

Located at 529 Pine Ave., Soun speaks English and Cambodian fluently. His Spanish is not as fluent, so his Spanish-speaking staff assists as necessary. He sees patients from age 5 on up. The doctor has offered his medical services at the clinic for more than two years, offering diverse services such as comprehensive medical exams, lab work, wound care, sports physicals and beyond. In addition, the clinic is also a COVID-19 testing center.

“My current clinic is called Sarin & Tao Family Medical Clinic Inc.,” Soun said. “It is a private solo clinic that I started about two years ago in Holtville in honor of my beloved parents, mother, Sarin Hang and father, Tao Soun. Both of my parents passed away two years ago in 2018,” he said.

Soun’s mother died at age 69 from lung cancer and his father, who was 79, died two months later.

Additionally, Soun said he works closely with doctors in areas from cancer management, post-stroke management and a variety of services.

“I work with a lot of specialists in the Valley as well as Yuma, San Diego, and Palm Springs,” he said.

A patient of Soun for several years now, Irma Gutierrez was involved in a car accident in 2014.

“I was referred to Dr. Soun in Brawley, and from there on I loved his demeanor, his bedside manner, how he explained everything, and his follow-up,” she said.

“He did everything so thoroughly. Now a days, doctors are in and out like a drive-through thing. With Dr. Soun, he shows you that he cares and wants to know your concerns,” Gutierrez said.

“My husband, Karlo, also visited him,” she explained. “Dr. Soun told my husband that his tumor was probably cancerous. Had he not seen it, reacted quickly, and ordered x-rays and referred him to a San Diego specialist, my husband may not have been here today.”

Soun’s Migration to the United States

Soun was born in Battambang, Cambodia, to a family of eight children, where he was middle fourth child.

“At about 4 years old, our family escaped the Khmer Rouge (a communist political group) killing fields in Cambodia to live in a refugee camp along the Thailand-Cambodian border from 1979 to 1984,” he said.

“At that time, I was first exposed to medicine through the works of Western volunteer medical doctors treating the refugees there,” Soun explained. “They helped treat me and my family with many medical ailments while living as a refugee. It inspired me.

“In 1984, after five years living in a refugee camp, our entire family got sponsored by a Mormon family through their church organization in Utah,” he said, explaining he was 9 years old when he came to the United States.

“Around 1987, we left Utah for California to pursue our education,” Soun noted. “It is Orange County, California, where I began my long-term education from grade school, junior high, high school and then college.”

“At that time, I did not know that medicine was going to be my calling,” he said.

“I only realized that medicine was my true calling when I was a junior at CSUF studying biochemistry. That is what inspired me to pursue medicine officially. Through biochemistry, I realized the direct connection between science and medicine, how it impacts the human body.”

After college and before starting medical school, Soun attended State University of New York at Albany School of Public Health, majoring in epidemiology from 2002-2003.

“After I received my epidemiology degree,” Soun said, “I worked with the New York State Public Health (Department) as one of their medical investigators in their zoonotic program, focusing on West Nile disease outbreaks. I worked there from 2003-2005 before attending medical school in 2005.

“I applied for medical school and got accepted to several medical schools. Eventually I decided on Ross University School of Medicine,” he said.

All of his clinical training was done in New York City and Chicago, two of the main epicenters of medical training in the United States, he said. After medical school, he underwent advanced residency training in Chicago with the Adventist Hinsdale Family Medicine Residency Program from July 2011 to June 2014.

“I was completely focused and consumed on becoming a family doctor,” Soun said. “I liked diversity in family medicine — not limited to one aspect of medicine — the whole family.

“I was recruited by Pioneer Memorial Health(care) District while I was still in residency. After completion of my residency, I relocated to Imperial County to begin my family medicine work. Eventually, I began my solo practice in Holtville in January 2018,” he said. “I was looking for a rural-type program where I can make more significant impact on serving the underserved/underprivileged population. I love the ‘slowness and the quietness’ of this rural setting as well.”

Things to Know About Soun …

One private thing that not many people know about Soun is that he has been a martial artist for more than 20 years.

“I was a martial artist before I was a physician,” he said. “I currently hold a third-degree black belt in Shotokan karate, and I am a practitioner of Jeet Kune Do martial art (the style founded by Bruce Lee).”

While pursuing his medical residency, Soun was recruited to the Army and served his country and continues to serve through the U.S. Army Reserve.

“I am a military officer with a rank of a major in United States Army Reserve. I am also a soldier and also serve as a medical doctor,” he explained.

Every month Soun goes to his reserve unit in San Diego, training and serving alongside other soldiers. “I was recently stationed at Fort Hunter Liggett (in Jolon), and before that, I was stationed at Fort Bliss (Texas),” he said.

Soun has volunteered his time in the past as a team doctor for the Holtville High School football team.  He also offered scholarships to the high schools of Imperial County.

“I have always been interested in family medicine because of diversity of medical diseases and being able to treat the whole family members. I love this challenging work of being a family medicine physician.”

Among his medical services and many accomplishments, he is an officially designated “civil surgeon” by the U.S. Department of Homeland Security and U.S. Immigration and Naturalization Center. Additionally, Soun is a medical examiner for the Federal Motor Carrier Safety Administration and also for the Department of Transportation.