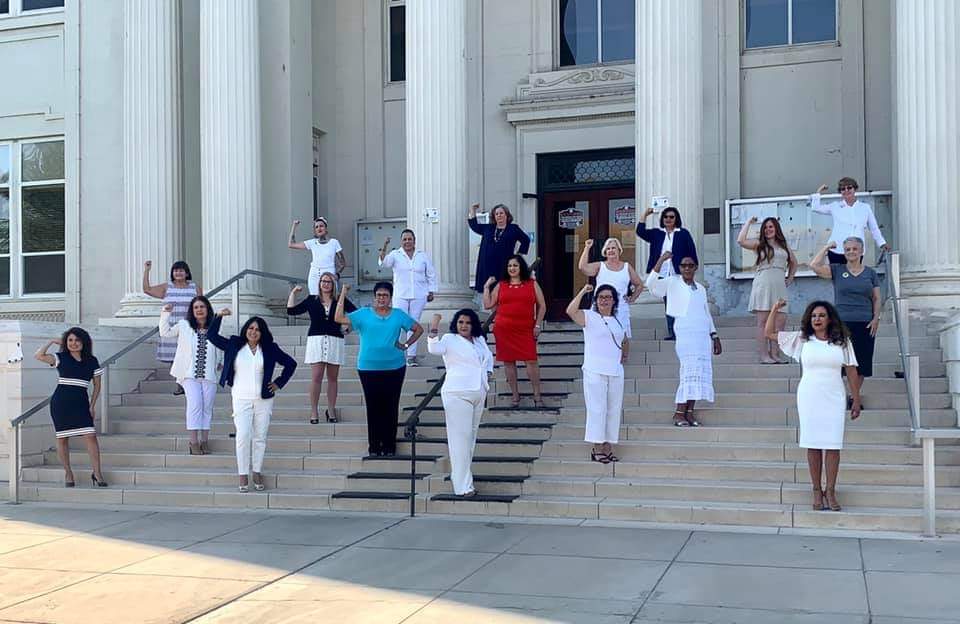 Nineteen of the 34 female candidates running for office in the local elections Nov. 3 gathered for a photo shoot on the steps of the Imperial County Courthouse in El Centro on Oct. 4. Candidates Yulil Alonso-Garza, Maria Laura Peinado, and Martha Cardenas-Singh arranged for the session. | PHOTO COURTESY OF ELLIE BURGUENO
Home
Featured Stories
In Featured StoriesRegional News

EL CENTRO — Come what may Election Day, some local candidates already are expressing a victory of sorts based on the significant number of women who are seeking public office this November.

All told, 34 of the total 98 local individuals whose names will appear on the Nov. 3 ballot are women, representing more than a third — 34.7 percent to be exact — of the total candidates vying for office.

Traditionally, fewer than one-third of the total candidates have been female, according to county data.

The considerable number of local women candidates was not lost on Brawley resident Yulil Alonso-Garza, a longtime community activist who is seeking a seat on the Imperial Community College District Board of Trustees, which oversees Imperial Valley College.

For Alonso-Garza, the apparent uptick in the number of local women candidates was made evident following a series of candidate forums hosted by Heber-based Wasupwu Productions.

The women’s strong showing also did not go unnoticed by Maria Laura Peinado, a Central Union High School District Board of Trustees candidate, and Martha Cardenas-Singh, who is seeking a seat on the El Centro City Council.

Together, the trio quickly organized a photo shoot on Oct. 4, on the steps of the Imperial County Courthouse that brought together 19 of the 34 local women candidates.

The gathering proved both momentous and inspirational, and for Alonso-Garza, a sign of things to come, electorally speaking.

“When we open a crack, we’re going to open it wide and bring everyone in,” said Alonso-Garza, who is running for office for the first time.

The number of women candidates vying for elected office in comparison to men (64) this November appears to reflect their overall showing in the past three election cycles between 2013 and 2018, where they typically represented less than one-third the number of their male counterparts, according to county Registrar of Voters data.

The more recent trend has been “over the top” thrilling for El Centro City Council member Cheryl Viegas-Walker.

“Diversity leads to better decisions,” she said. “Women don’t govern better, we just govern differently. And the outcomes of those decisions, the consideration of issues and ideas, are enhanced when we have different points of view sitting around the table.”

The current crop of women candidates also provides Viegas-Walker with hope that, eventually, one will attain a seat on the county Board of Supervisors, which has historically remained elusive for women candidates.

In 2016, she had an unsuccessful bid for such a seat, and noted that in the county’s 100-plus years of existence, only two women have served as supervisors.

“I have to hope that women being represented in greater numbers on school boards and councils will lead to other opportunities both at the county level and statewide and beyond,” Viegas-Walker said.

Calexico City Council candidate Gloria Guadalupe Romo said she considers being a woman an asset when it comes to running for and holding public office.

As someone who has brought a specialization in finances to her current elected position of Heffernan Memorial Healthcare District director, she said she has an innate understanding of equity.

“Although (the number of women candidates) is significant, it is not enough,” Romo, who took part in Sunday’s photo shoot, said in an email. “Gender balance needs to be reached.”

First-time public office seeker Cardenas-Singh said she is also of the opinion that the considerable number of women candidates this year should be considered momentous and encourage women of all ages to become part of the decision-making process.

The El Centro council candidate said community service and advocacy have long been a part of her family’s lives, and her career in the education field and candidacy are an extension of that. Win or lose come Election Day, Cardenas-Singh said that same level of commitment and dedication to community can be expected to continue.

“We’ll continue to do this good work, whether it’s campaign season or not,” she said.

Similarly, Laura Goodsell, Holtville resident and Imperial County Office of Education Board of Trustees candidate, said her bid for public office is an extension of her longtime community engagement and advocacy.

Though Goodsell did not take part in the Oct. 4 photo shoot, she said she has since come to realize the significant number of women candidates seeking public office next month.

Admittedly, Goodsell said, gender hardly factored into her decision to seek public office this year, nor in the past when she successfully was elected as a Holtville Unified School District board trustee. “I just considered myself someone who wanted to make a difference and who thought I had the talent and skills to do it,” Goodsell said.

Previous
Imperial Ag Value Down in 2019; COVID Effect Won’t Be Seen for a Year