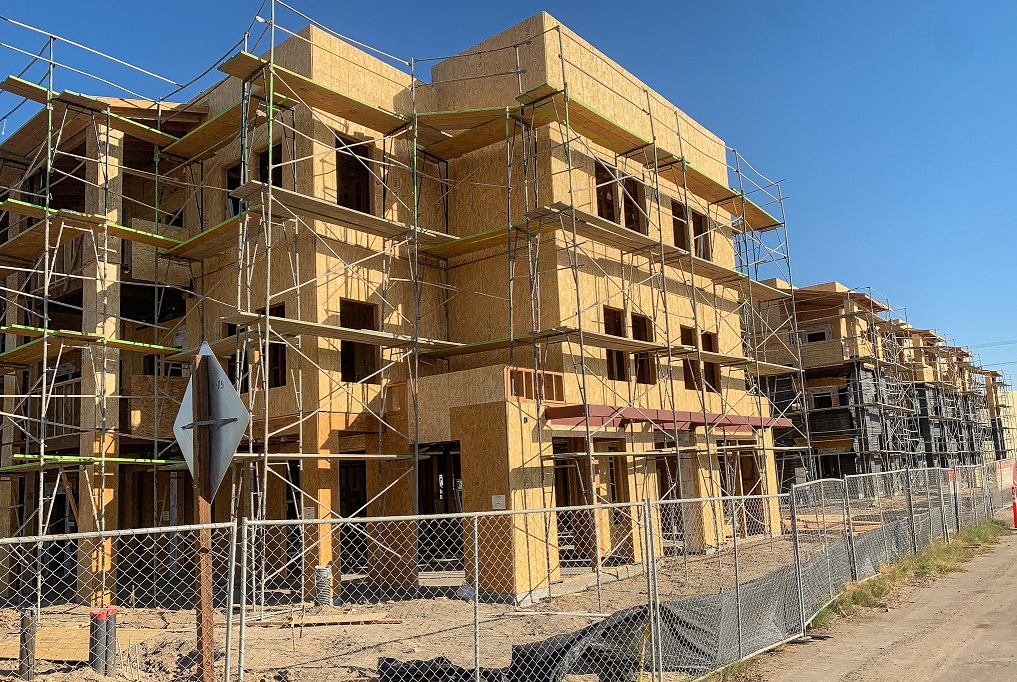 Holtville city officials are expressing concern that a new 44-unit, mixed-use apartment complex and commercial development being on Fourth street between Holt and Fern is being designated for farmworkers only. | CORISSA IBARRA PHOTO
Home
Featured Stories
In Featured StoriesLocal News

New Holtville Apartments Will Be for Farmworkers, City Expresses Concern

HOLTVILLE — City officials here have expressed some dissatisfaction that a 44-unit apartment complex under construction will not be available for all interested renters as initially anticipated.

In September, city officials were made aware by rejected prospective renters that the development known as Fern Crossing would be solely reserved for farmworkers, City Manager Nick Wells said.

The project was initially approved by the city in mid-2018, at a time when the developer was noncommittal about possibly seeking state subsidies to help offset development costs and which would require the housing be designated for low-income residents, Wells said.

“The biggest point of disappointment for us is we don’t have a lot of new housing stock,” he said.

Increasingly, housing projects within the state are applying for subsidies that specifically fund the development of affordable housing and which help offset construction costs, Wells said.

Wells also emphasized that the developer, Pacific West Communities Inc., was within their rights to change the designation of the complex’s occupants as the project progressed because it is private property.

“Even if we vehemently opposed it, there wasn’t a heck of a lot to do about that,” Wells said. “That’s not something we have a good deal of control over once we go down that road.”

Yet, city officials nonetheless remained grateful for the mixed-use housing and retail development, which is located on Fourth Street between Holt and Fern Avenues.

The project will consist of three three-story buildings, one of which will include 1,618 square feet of ground-floor commercial space, as well as a property management office and community center.

“Holtville is at a point where it needs more residents to be able to bring in other investors into town that would look at Holtville as a sustainable place to bring business,” Mayor James Predmore said. “Every apartment complex and house that is built gets us one step closer to that.”

Predmore, too, sympathized with residents who are not farmworkers and whose hopes to find housing at Fern Crossing upon its completion were dashed.

The Regional Housing Needs Assessment Committee that Predmore is a board member of, and which is overseen by the California Department of Housing and Community Development, has also started to take a closer look at those issues, he said.

The Fern Crossing developer reportedly applied for funds from the California Department of Housing and Community Development’s Joe Serna Jr. Farmworker Housing Grant Program, according to one of Wells’ recent reports to council.

The grant program’s list of recent awardees did not include the Fern Crossing development but did state that nearly $12 million in grants were awarded to three separate projects in the county.

In June, the city’s Planning Commission approved a separate three-building, 44-unit mixed use development called Pine Crossing that will be located on Fourth Street between Holt and Pine avenues and which is also being developed by Pacific West Communities Inc.

To his knowledge, Wells said the developer has not indicated that it will seek subsidies that would designate the project as affordable housing.

The pair of developments are part of an additional number commercial projects and renovations scheduled for the downtown area, which will contribute to the area’s “walkability,” or ability for residents to patronize businesses without having to drive out of town.

“It’s kind of an exciting thing to have a new walkable downtown,” Wells said.

What could be considered lacking is the additional construction of single-family homes within Holtville, he said.

The last time such homes were built in the city was about 2013, when about 30 were constructed. Before that, no single-family homes had been built within the city since about 1980, Wells said.