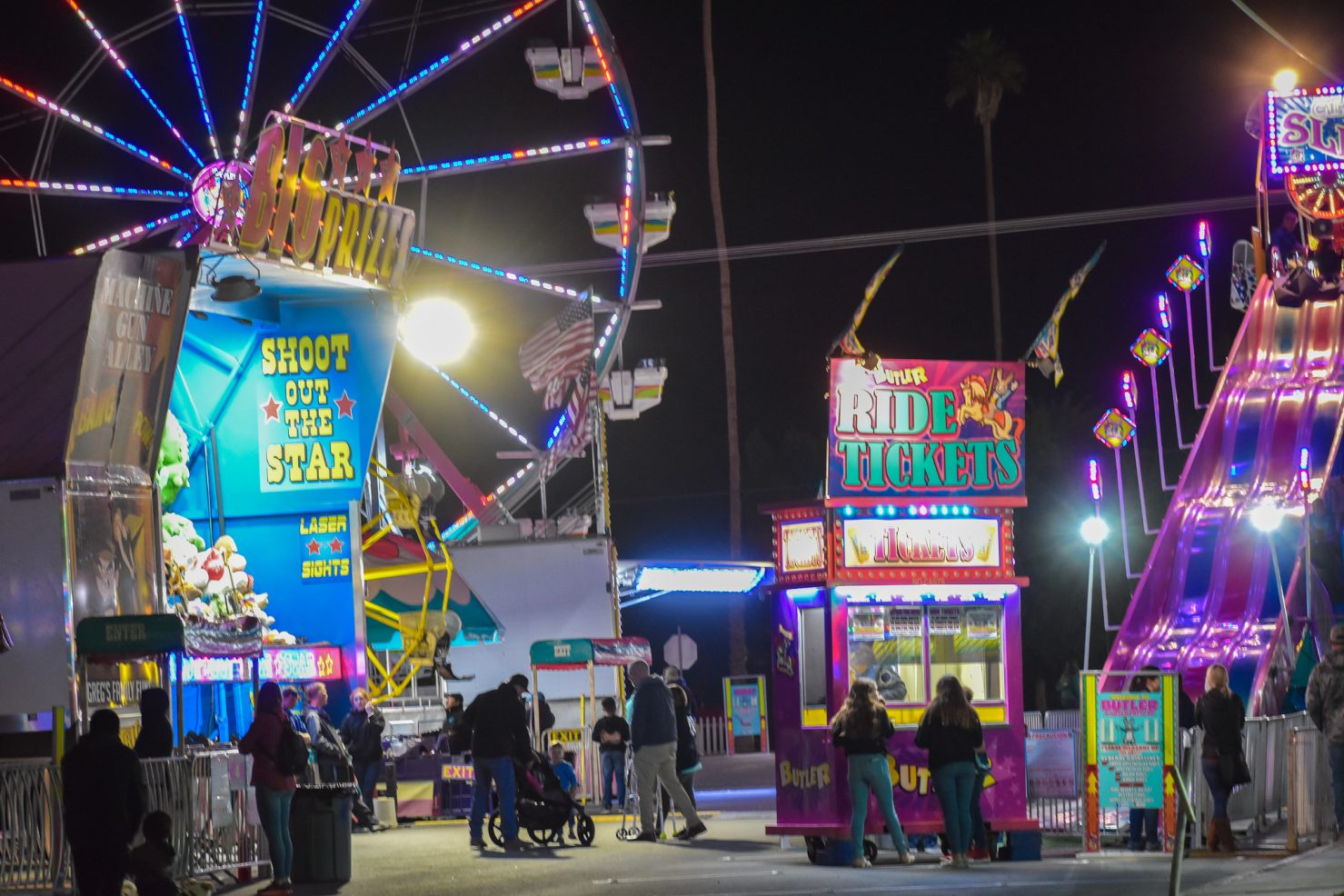 The bright colorful lights of the Ferris wheel call out to revelers at the 73rd Holtville Carrot Festival carnival in February. Chamber of Commerce officials are moving forward with plans for the 2021 Carrot Festival. | CORISSA IBARRA PHOTO
Home
Local News
In Local News

HOLTVILLE – Plans remain in place for the Holtville Chamber of Commerce to host its 74th annual Holtville Carrot Festival as scheduled in early February.

Chamber Chief Executive Officer Rosie Allegranza acknowledged on Oct. 15 that much could change in the interim over the next few months, but that organizers remained hopeful that conditions would improve.

“We’re moving forward as if we’re having it,” Allegranza said. “We’re trying to be optimistic.”

The chamber’s lingering uncertainty comes amid the COVID-19 pandemic and resultant state and county health orders that have effectively shuttered large gatherings and nonessential commercial activities.

Discussions with amusement park ride operators for the planned 10-day event have continued no differently than before, as have talks regarding other components of the city’s signature annual event, Allegranza said.

The chamber is reserving its final decision about the festival’s status until December or early January, should the ongoing pandemic and restrictive health orders fail to ease between now and then, she said.

Currently, the festival is scheduled for Feb. 5 through Feb. 14.

Should COVID-related health and safety restrictions remain in place at the turn of the year, the chamber plans to host a scaled-back version of the popular event that has run uninterrupted since 1948, when it was initially known as the Carrot Carnival.

“We just have to be creative if we’re not allowed to hold it,” Allegranza said. “We’ll figure out something spectacular to do.”

Were such a scenario to take place, the festival would likely have to dispense with its parade, she said, since such an event is considered nonessential.

Changing activities and amenities have been a hallmark of the annual festival, prompting Allegranza to offer assurances that organizers could be depended on to respond in kind to the pandemic’s restrictions.

Even so, starting Oct. 19, the chamber will start accepting applications for the Carrot Festival Queen, Princess and Junior Princess competitions. The nomination process for the Citizen of the Year is also expected to be opened soon after, Allegranza said.

Applications for the festival royalty competition can be picked up in the chamber office, 101 W. Fifth St., by appointment and will soon made available on the chamber’s website.

The chamber also has plans to host a town hall meeting at 6 p.m. Oct. 22 at the Holt Park gazebo, where the public will have the opportunity to meet the four individuals vying for a City Council seat on Nov. 3.

In order to help keep crowd size to a safe level, the chamber is encouraging the public to watch a livestream of the event on the chamber’s Facebook page.

The chamber is reminding the public as well that a limited number of raffle tickets for the Holtville Chamber Sweepstakes remain available for purchase by contacting the office.

Winning tickets that are selected during a drawing will have their ticket returned to the pool to allow for additional chances of winning, Allegranza said.

Previous
GILGAR: Is ‘Rio Vargas’ in the Valley’s Future?