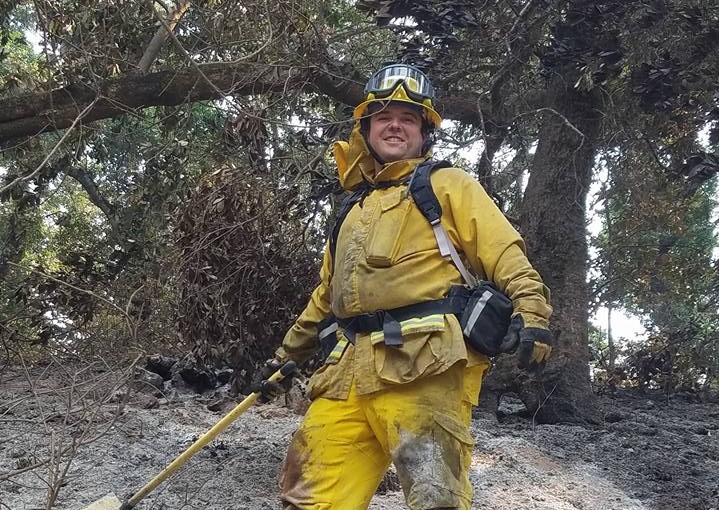 The late Jonathan Burnworth, known as “Jonny B the EMT” while working for the Holtville Fire Department, smiles when holding a hoe and an ax while fighting a wildfire in the mountains as part of a strike team. Burnworth died Oct. 27, 2018, but his legacy lives on in the form of fundraisers and scholarships in his memory benefiting the Holtville Firefighters Association. | COURTESY PHOTO
Home
Featured Stories
In Featured StoriesLocal News

‘Jonny B the EMT’: His Legacy Lives On, Keeps Giving

HOLTVILLE — October marks the second year since Jonathan Burnworth, also known as “Jonny B” to friends and family, died from a tragic diving accident while working as a member of the Imperial Irrigation District dive team.

But his legacy lives on in the form of a fundraiser, a program and a scholarship in his name meant to support programs through the Holtville Fire Department, where the late Burnworth was a firefighter and emergency medical technician from 2016 to 2018, before joining the IID.

Those who knew Burnworth, who died Oct. 27, 2018, including family and Holtville fire personnel, say Jonny had a passion for helping others, especially kids and the underprivileged.

“Jonny B made such a huge impact to Holtville fire,” Chief Alex Silva said, adding the department’s Guardian Angels program was renamed to the Jonny B Guardian Angels Program to pay tribute to him and his family for his contributions.

The program “honors his memory and leaves a legacy to live on through him for his children to see,” said Jonny’s widow, Katie Burnworth. He was also survived by their children, daughter Parker, 6, and son Colton, 3.

At this time last year, the family had its first barbecue fundraiser to support the Angels program and Holtville fire’s charitable efforts, but due to the pandemic the barbecue itself is on hold this year.

However, members of the Burnworth family launched a GoFundMe page to raise funds for the Holtville Firefighters’ Association in Jonny’s name a couple weeks ago.

How the Barbecue Fundraiser Began

Although his time with Holtville fire was relatively short, he made an impact. By the time he left in 2018, he had attained the rank of captain, according to Silva, and was known as “Jonny B the EMT.”

Patricia Burnworth, Jonny’s mother, had the idea to have an annual barbecue to honor her son and raise funds for Holtville fire. Erick Burnworth, Jonny’s brother, said, “we wanted to help the Guardian Angels program with the funds.”

The 2019 barbecue funds not only covered the Guardian Angels program, but also helped the Explorer program and a scholarship fund.

“We were planning to do the same (barbecue fundraiser) this year in October. Due to the pandemic, we created a GoFundMe instead,” said Erick, who started the online fundraiser Oct. 10.

To contribute, donors can visit https://charity.gofundme.com/o/en/campaign/2nd-annual-jonny-b-memorial-fundraiser

“Right now, more than ever, people are losing their jobs, and we need to give back to them. Kids shouldn’t have adult problems and adult worries,” Katie said of the Guardian Angels program.

“Jonny is also a donor (organ), and his gift of life continues to help others, even though he is no longer physically here with us. And same as with this foundation,” Katie added.

More About ‘Jonny B the EMT’

Burnworth went to Miramar Fire Academy and worked for Imperial County Fire Department as a reserve firefighter, and then worked for several ambulance companies in San Diego and Long Beach. From there, he came back to the Valley to work in the family landscaping business.

Silva goes on to tell how Burnworth was hired in Holtville as a reserve firefighter. He moved his way up the ranks and eventually got picked up as a full-time firefighter, Silva said.

“After being with us,” Silva added, “he pursued a job with IID dive team. Personally, I know it was the best for his family, but I really hated losing him. He was a good friend and my right hand.”

Jonny B was known for his ability to be calm during a stressful situation. “We could have things blowing up around us and he would remain so calm,” Silva said.

“In the past, the schools would pick the kids, and the Fire Department (would) set aside $200 for each kid which covered $100 worth of shoes and clothes and a $100 gift certificate from Wal-Mart during Christmas break,” Silva said. “This program was funded in part by the Burnworth donations in addition to other donations from the town.”

Referring to the Jonny B Guardian Angels Program, Silva indicated that everything is uncertain this year due to COVID. The Fire Department is considering a community gathering in December or March 2021, where law enforcement such as the county Sheriff’s Office, U.S. Border Patrol, and the Fire Department would be available to speak with the kids along with conduct various giveaways.

“Next year, we will continue (the fundraiser) with another picnic-barbecue setup,” Erick Burnworth said.

Another program that benefited from the fundraiser was the Explorer program.  “This is for kids from 14-18 that want to learn how to be a firefighter. We were able to pay for insurance for kids because they do fire science that could potentially be hazardous,” Silva said.

Lastly, the “Jonny B the EMT” Memorial Scholarship of $500 was awarded to Edward Rubin last year.

“At first, (Rubin) wanted to be a game warden, but since decided to be a reserve firefighter at Holtville fire. He is currently in the fire academy,” Silva proudly said.

The goal of the scholarship, as indicated on the application, is to provide encouragement or guidance to students similar to Jonny Burnworth. Preference is given to a student who is already interested in pursuing a career in emergency medical services, firefighting, nursing, or law enforcement.

Erick Burnworth relayed that Jonny would be thankful and thrilled that this (fundraiser) is happening, and that they are donating in his name.

Added widow Katie: “Outside, there’s something bigger than you. It’s about staying humble and appreciating what you have. Some people pray for things that you have.”