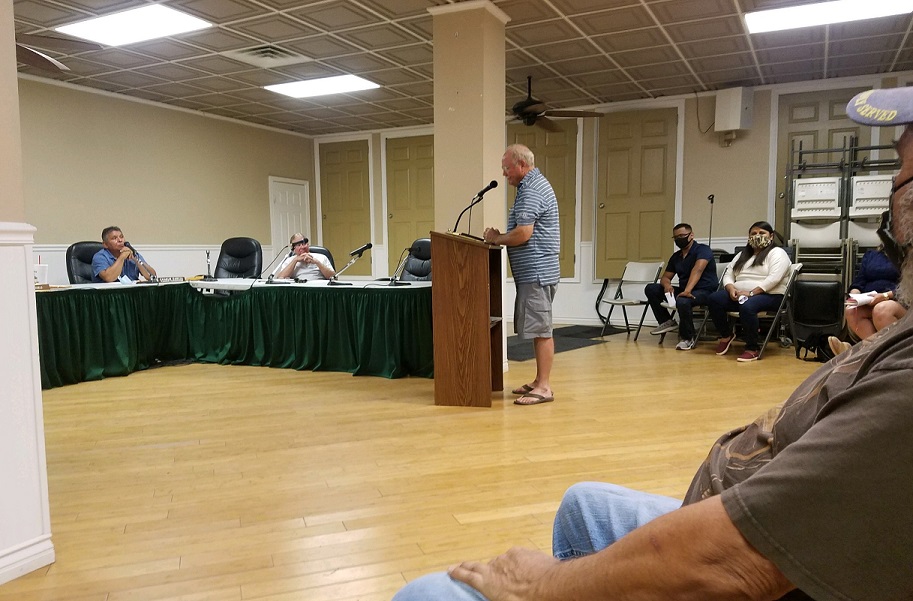 HOLTVILLE — The Holtville Planning Commission on Oct. 19 approved the annexation of several parcels of land at the northeast corner of Ninth Street and Melon Road that are being proposed as the site of a 152-unit apartment complex.

The commission’s unanimous approval of the land’s annexation followed an hour-long public hearing where multiple residents spoke out against the proposed apartment complex, and less so about the annexation proposal before the commission.

Prior to the resolution’s approval, commission chair Ross Daniels sought to clarify the purpose of the meeting and deflect some of the community members’ concerns.

“It’s about bringing that lot into the city of Holtville,” Daniels said. “It’s not about approving plans for townhomes, apartments or whatever that may be.”

The four members of the commission present for the meeting also approved the resolution’s mitigation plan. That plan was compiled in response to input that was provided to the commission by several local agencies and utility providers.

In what appeared to be a concession to the residents’ opposition to the potential construction of the 152-unit apartment complex, the commission chose not to designate the parcel’s zoning as R-3, multifamily, which the property owner had sought and which would’ve allowed for the apartment complex to be built as proposed.

Instead, the commission designated the parcels’ zoning as R-1 and R-2, which would limit potential housing construction, respectively, to single-family homes and two-family homes, such as duplexes.

The commission’s approval of the resolution advances it to the City Council, which could approve it as it now stands or modify it as the council sees fit.

About 7.75 acres of the 8.19-acre proposed housing development site is unincorporated private land that required annexation to move forward. As it was originally proposed, the housing development consisted of a total of 11 two-story buildings, a community recreation center, parking lot, retention basin and landscaped grounds.

During the Oct. 19 meeting, property owner John Hawk said that he has been attempting to develop the land for the past eight years and has repeatedly encountered delays and obstacles.

In response to some of the community members’ concerns about the proposed development, Hawk made it clear during the commission meeting that he was equally opposed to having the site potentially developed into low-income housing, and would refrain from selling the land to anyone with those intentions.

He further explained that he was working with a local real estate company to examine the possibility of building townhomes at the site, as well as the possibility of seeking subsidies through the U.S. Department of Agriculture to help advance such a project.

Hawk, a Holtville resident and business owner, characterized the city’s current growth as “treading water” in the absence of additional housing and commercial development, and was aware of the city’s shortage of single-family homes.

In the past, he had considered single-family homes for the site, but since then had reconsidered for reasons not made explicitly clear during the meeting.

“I’m not going to back down on my vision to help Holtville,” Hawk said. “I’m still committed to the fact that it needs to grow.”

Several of the half-dozen or so community members who expressed opposition to the proposed project during the public hearing cited the apartment complex’s apparent high-density as a point of contention.

Holtville resident and business owner Rudy Schaffner said he would’ve preferred to see 48 homes proposed for the site that is located near his home, in place of the proposed 152 apartment units.

“It’s way too many homes and not enough property,” Schaffner said.

Ray Roben, of Imperial-based Roben Realty, said he is working with Hawk to find an agreeable solution to the land’s potential development and assured those gathered that Hawk had the community’s best interests in mind.

While Roben said he sympathized with some of the residents’ concerns about the proposed apartment complex, he stated that its density of 18 housing units per acre was considerably lower than the 35 to 40 units per acre one of his previous housing development projects had built.

“From a density standpoint, it’s really not all that dense,” Roben said.

During the public hearing, City Manager Nick Wells said that the City Council, when it soon considers the matter of the annexation and proposed development, could place further conditions and restrictions on the proposed development if it so desired.

He also sought to dispel any misperceptions among residents that the city was the driving force behind any pending and proposed low-income apartment construction within the city.

Those projects are more of a reflection and combination of the private property owners’ intentions and the wide availability of state subsidies for low-income housing projects.

“We don’t have a lot of latitude to say no to any housing projects at all,” Wells said.

Previous
‘Jonny B the EMT’: His Legacy Lives On, Keeps Giving