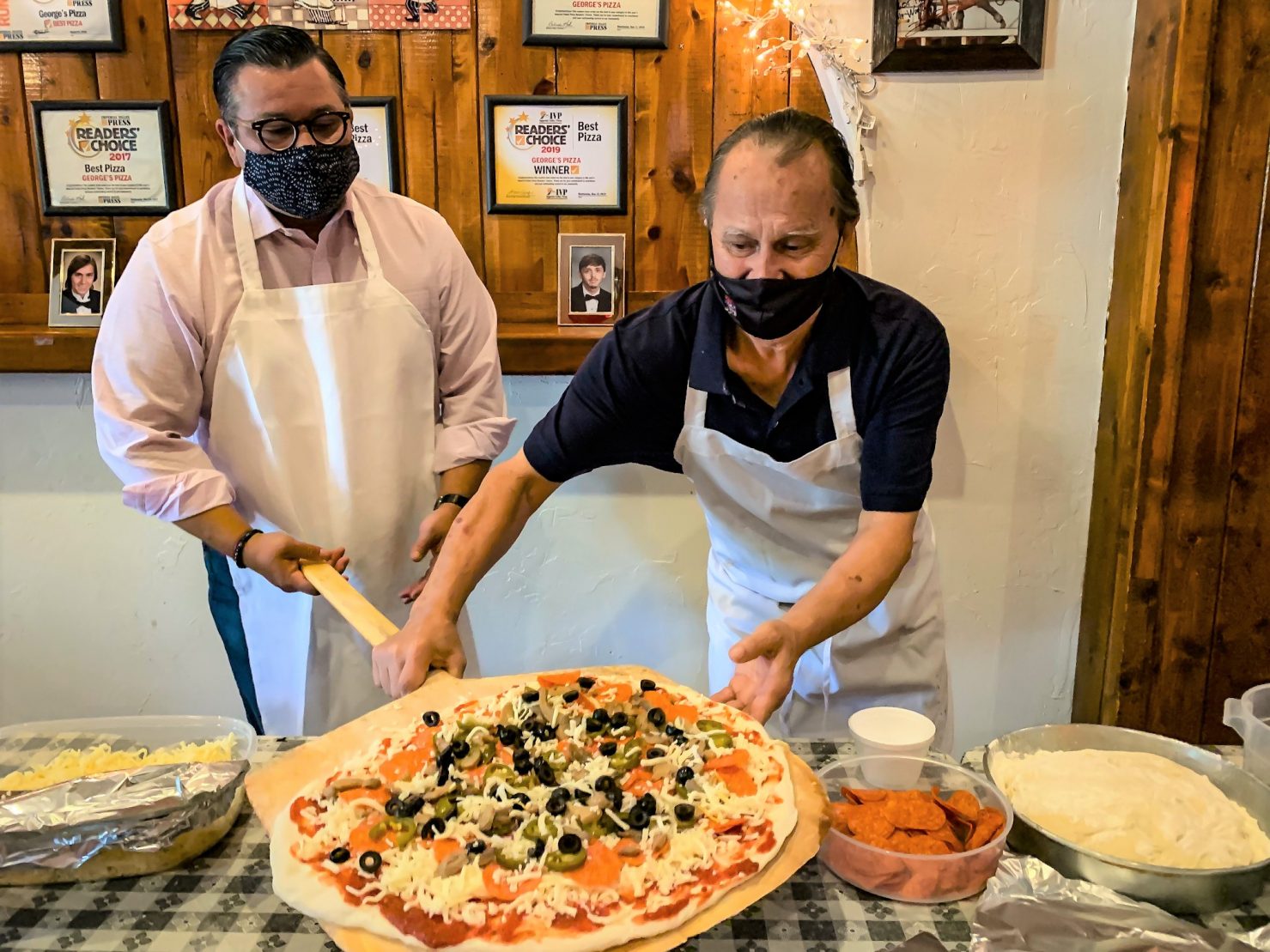 Assemblyman Eduardo Garcia (left), D-Coachella, is taught how to prep his own pizza by George McClure, the namesake behind George’s Pizza in Holtville. Garcia visited George’s on Wednesday, Oct. 21, to present the McClure family with a proclamation honoring the eatery as the 56th Assembly District’s Small Business of the Year for 2020. The Assembly member learned to make three customs pies. | CORISSA IBARRA PHOTO
Home
Featured Stories
In Featured StoriesLocal News

HOLTVILLE — The proper way to prepare a pizza, said George McClure Jr., is to knead the dough into a small circle that is then hand-stretched, carefully to avoid tearing, before molding into its desired shape and size.

“It’s all about taking it nice and easy, nice and slow,” said McClure, whose namesake father founded Holtville’s widely popular George’s Pizza in 1991. “It takes a little practice.”

George Jr.’s years of practice — the 24-year-old has been a fixture at the family’s pizzeria ever since he could remember — appears to have paid off with the announcement that George’s Pizza was named the Small Business of the Year for the state’s 56th Assembly District.

More than just a validation of the family-owned pizzeria’s tasty fare, the recognition honors the McClures just as much for their strong work ethic and continued support of the community.

The recognition was also something of a no-brainer for Assemblyman Eduardo Garcia, D-Coachella, who has been something of a regular at the pizzeria since his teenage years, when he frequently visited his late grandfather’s house located just a few blocks away.

“If there’s any community that I have a real strong connection to in Imperial County, it’s actually Holtville,” Garcia said on Wednesday, Oct. 21, during his visit to the eatery to present the McClures with a formal proclamation recognizing the achievement.

Aside from the proclamation, Garcia provided the McClure family with a gift bag that included a pair of flyswatters adorned with the California Assembly seal, as well as a miniature replica of the local billboard that is currently adorned with his campaign office’s announcement of the pizzeria’s recognition.

The larger billboard’s sign recognizing George’s Pizza was installed on Oct. 12 at the southeast corner of State Route 111 and Evan Hewes Highway and features a picture of the pizzeria’s owners, George and Blanca McClure.

The recognition came both as a surprise and an honor for Blanca McClure, who said much credit is due to Holtville residents’ continued support as well as that of the wider Valley community.

The family-owned and operated pizzeria owes its existence to her husband George’s passion for making pizza, a talent he initially honed as an employee of a Numero Uno pizzeria when he attended college in the Los Angeles area.

His pizza-making resume also includes a stint as a cook at the Top Hat Saloon, which had previously occupied the space at 116 W. Fifth St. where the George’s is currently located.

When George Sr. decided to branch out on his own, he started on a much-smaller scale and in a much-smaller space, and with the community’s increased patronage, he was soon able to relocate to a larger venue. George’s Pizza has been at its current location since 2005, following a brief hiatus in operations, Blanca said during Assembly Member Garcia’s visit.

“We’ve been very blessed,” she said. “This is something that we love to do.”

Soon, additional Valley residents may have a George’s Pizza to frequent in their own community, as the McClures have hopeful plans to expand their family-oriented business.

George Jr. said he has been groomed for such an occasion since he was old enough to answer phones at the family business, which aside from slinging pizza pies also sells salads, sandwiches, and sides.

His 18-year-old brother, Jonathan, is expected to follow suit, too, said Blanca, who called the restaurant her children’s “second home.”

“This is their future,” Blanca said.

The Small Business of the Year recognition is awarded annually through a collaboration between the California Small Business Association and state legislators, who get to nominate a small business from their respective districts.

Typically, the honorees gather in June for an awards luncheon in Sacramento. Due to the pandemic, however, the association first postponed the event and then subsequently cancelled it.

The event’s cancellation prompted the association to allow 2020’s Small Business of the Year awardees to retain the title for 2021, when it is hoped that improved conditions will allow the honorees and legislators to gather in Sacramento.

In the meantime, Garcia said he hopes that George’s Pizza’s recognition helps remind other businesses that financial assistance remains available through the state to help them deal with the COVID-19 pandemic, as well as further serve to highlight the restaurant’s contribution to the city and Valley.

“Hopefully, it’s a good shot in the arm over the next few weeks for some business to come this way,” Garcia said.

The pandemic and its related restrictions on business operations have presented challenges for George’s Pizza, but it has yet to seek any emergency relief funding and has been able to retain most of its workforce, the McClure family said.

Blanca McClure said she is thankful for the community’s support during the past challenging months. Five years ago, the pizzeria faced a different kind of challenge, and an equal display of community support, when it sustained smoke and water damage as a result of a fire at an adjacent building.

Supporting the community has been a longstanding tradition of George’s Pizza. Its walls and shelves are adorned with numerous plaques and trophies related to the restaurant’s sponsorship of youth sports teams.

“Whether they win or lose a game, good pizza always puts a smile on their faces,” Blanca said.