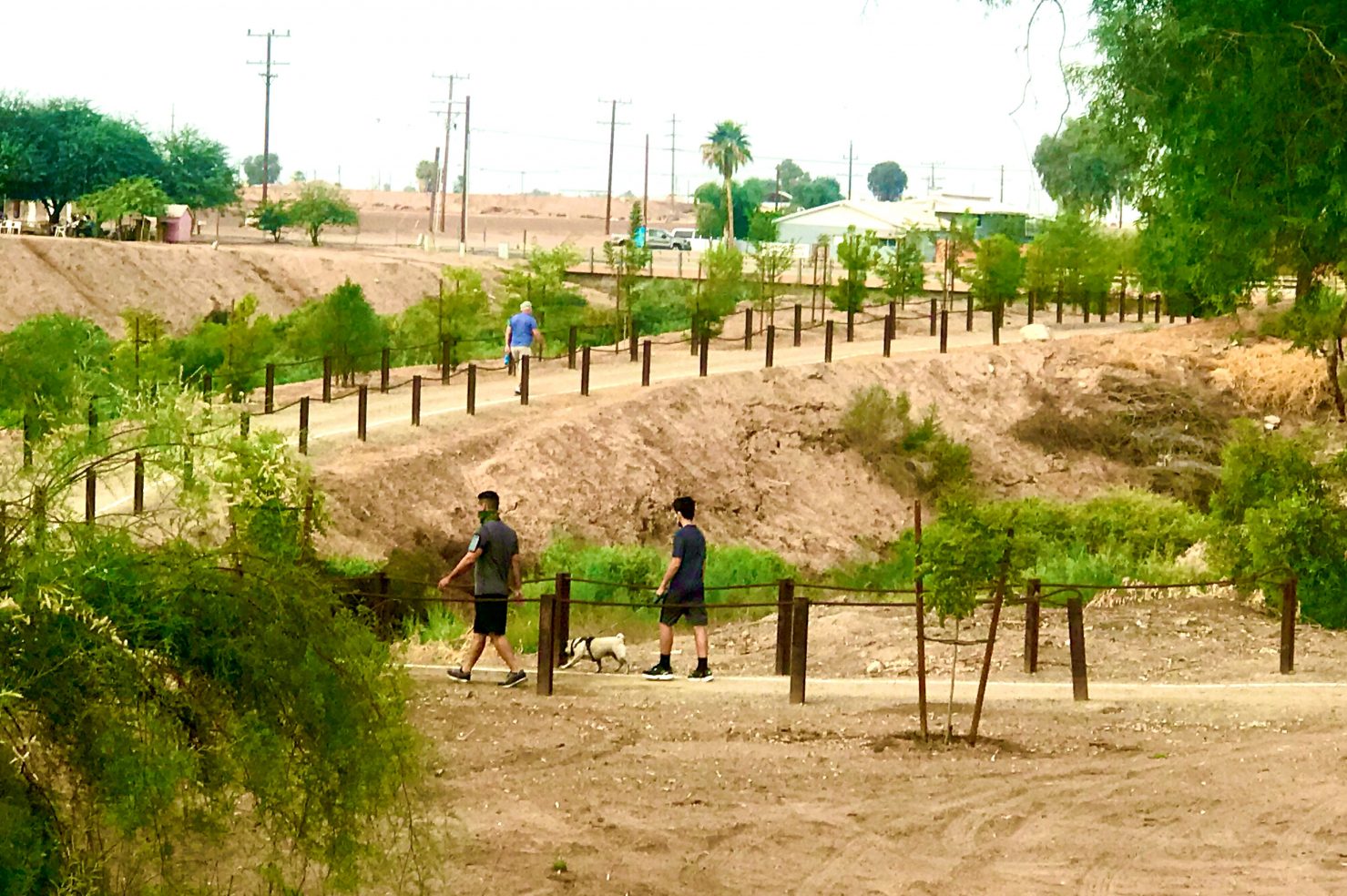 “We want everyone to eventually walk this trail and know what a nice wonderful thing it is,” City Manager Nick Wells said. “It’s really beautiful and people can’t believe this is in Holtville.”

The event marked the first official public gathering in the city of Holtville since stay-at-home orders had been put in place in March with the arrival of COVID-19. A town hall and City Council candidate forum that had been planned for Holt Park on the evening of Oct. 22 was postponed.

Morning registrations for the annual trail walk began at 8 a.m. in the gravel parking lot beside the local skate park on the corner of Fourth Street and Pine Avenue. The hour-long trail event formally began at 8:30 a.m., with several participants sporting face masks as they strolled the trail with friends, children, and even some four-legged pets.

“It’s kind of crazy right now to bring everyone together, so that’s really the purpose of it,” Wells said. “In today’s COVID-19 (pandemic), having an outdoor exercise-related event is really a good thing right now, so we said for sure we are going to keep it going this year.”

More than 40 community members came out to practice social distancing while walking the 1.2-mile hiking trail. Participants had the opportunity to take in the trail’s scenic views of the Alamo River and flourishing greenery that led walkers back into town after first looping under the charred railroad trestle bridge that stands near the city’s entrance west of Highway 115.

Efforts to secure grant funding to repair the trestle bridge and incorporate it with the Pete Mellinger Alamo River Trail are already underway by the city. In September, the City Council approved the third phase of the application process for the Recreational Trails and Gateway Grant Program, which the city applied for last year through the California Natural Resources Agency.

The current trail will eventually feature a fork in the road after the loop under the trestle bridge that will provide the public with an additional recreational trail, which will continue along the top of the bridge. Landscaping, benches, and signage are also planned to be installed on the trail pathway leading up to the trestle bridge, according to the city planning reports.

“This current trail goes underneath the railroad bridge and goes into town, so what we will do is we will have a fork right there separating the two and have the trail follow the river about half a mile to go to the wetlands,” Wells explained.

He noted that although the local wetlands don’t exist just yet, the city is nearly ready to bid out the construction of the wetlands.

The Walk the Trail event continued from the bridge into the city with white chalk outlines guiding participants from Olive Avenue to West Sixth Street, until returning on to Pine Avenue, where local firefighters awaited event-goers to cross the trail’s finish line. The chalk outlines came to a stop underneath an American flag that welcomed walkers as it waved, suspended between two fire engines in an alleyway behind City Hall.

“We have our firefighters spread out throughout the trail,” Fire Chief Alex Silva said. Firefighters and members of the Sheriff’s Department local substation were on city street corners directing participants walking the trail.

No stranger to the trail, Silva was happy to see the annual event return despite the ongoing pandemic that has forced several social gatherings to cease out of fear of spreading the coronavirus.

“I know with all the stuff that’s going on right now this is a nice way for the community to start socializing again with each other,” Silva said. “It’s an awesome trail and we want people to get used to it, and also for them to come out and do something healthy.”

Exercise and fresh air were just the things to inspire Holtville resident Manuel Provencio to join the walk with his son and their pet dog, Nugget.

“One of the main reasons why we came out is because there is not a lot to do, and it’s something positive,” Provencio said. “We usually go to the (Colorado) River and to the local things we have in the Valley like the desert area and Superstition Mountain.”

Provencio said he learned of the morning trail from the white chalk outlines he saw directed around town and decided to check out the local trail for the first time.

“It’s a good day today, and it’s something outdoors to promote good endorphins and just get out,” Provencio said.

Anyone who missed the annual event will still be able to visit Pete Mellinger Alamo River Trail during the park’s regularly scheduled hours.

A small health fair was planned immediately following the walk, where CVS Pharmacy was to provide free flu shots. However, due to shipment issues the shots were not available and free clinic will be rescheduled for one of the next two Holtville farmers markets scheduled for Oct. 29 and Nov. 11, Veterans Day, from 5:30 to 8:30 p.m. in front of City Hall, Wells explained.

For more information on the upcoming farmers markets, contact the city at 760-356-2912.