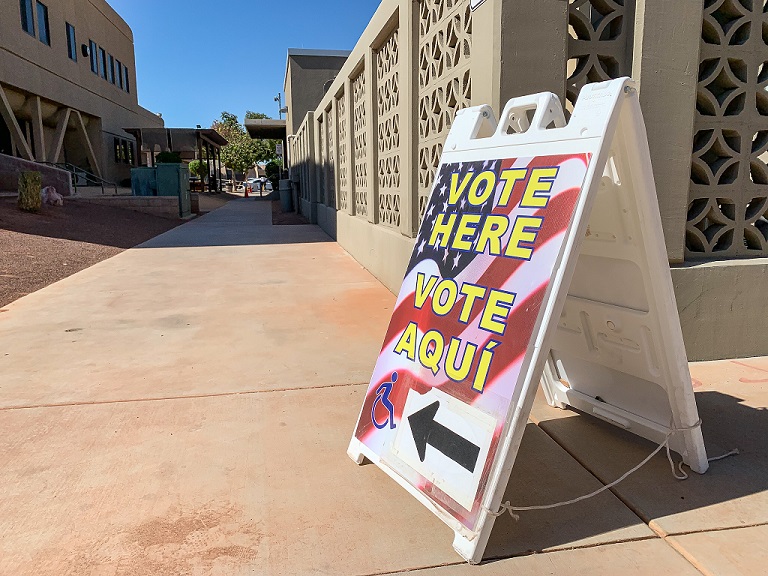 A sign outside the County Administration Center in El Centro on Tuesday, Oct. 27, points to an early polling site for the Nov. 3 General Election. Early voting is ongoing through Election Day in the Election Department inside the county building. | CORISSA IBARRA PHOTO
Home
Election Coverage
In Election CoverageRegional News

IMPERIAL COUNTY — In less than a week, Imperial County voters will join the rest of the country in helping decide who will lead the nation and various federal and state government positions in the Nov. 3 General Election.

Closer to home, however, dozens of municipal, educational and special district positions await resolution, as registered voters weigh in on who will represent them and develop policy on their behalf on boards and councils throughout the Valley.

As of Sept. 4, some 81,072 people were registered to vote in Imperial County, which makes up 81.24 percent of eligible county residents. That is one of the top-five largest increases in registration by percentage in the state since 2016, according to Secretary of State Alex Padilla’s office.

There were 77,390 voters registered for the March 3 primary.

Officials are guessing this Election Day will look different than in the past due to several factors, one being pandemic restrictions.

“It is difficult to estimate how many ballots will be received via mail versus in-person voting,” Imperial County Public Relations Officer Linsey Dale said Tuesday, Oct. 27. “However, due to COVID-19 limitations, I can definitively say that we anticipate a much greater number of mail-in votes compared to previous election cycles.”

There’s also the retirement of county Registrar of Voters Debbie Porter to take into consideration, who announced she would step down effective Election Day during last week’s county Board of Supervisors’ meeting on Oct. 20.

“Through my time as the Registrar of Voters I have served the people through the electoral process with integrity and honesty,” Porter said Oct. 27. “I have seen many changes in the elections process through the years, but most notably has been how votes are cast.

“So far, the 2020 General Election has seen more mail-in ballots than any other election in our history,” she added. “With this experience, I foresee the need for more mechanization being used in processing future elections.”

The March primary saw 35.06 percent of all votes being cast by mail-in ballots, while the rest were precinct votes. Total turnout was 30.97 percent of registered voters.

While it isn’t clear how the numbers will change with the upcoming election, the county does have a plan to make sure votes are recorded and announced.

The county has assembled a transition team to shadow Porter and work closely with staff to ensure continuity of the election process, according to Dale. That transition team, which includes representatives from the Executive Office, County Counsel and Human Resources, will stay until a replacement has been confirmed.

County officials would not go into further detail and Porter would only answer questions submitted through Dale.

There are also new regulations from the state government this year to consider.

While mail-in ballots must be postmarked on or before Election Day, the deadline for when those ballots must arrive at the county Elections Office has been extended from three days to 17 days. This is just in case there are delays by the postal service, according to information from Secretary of State Padilla.