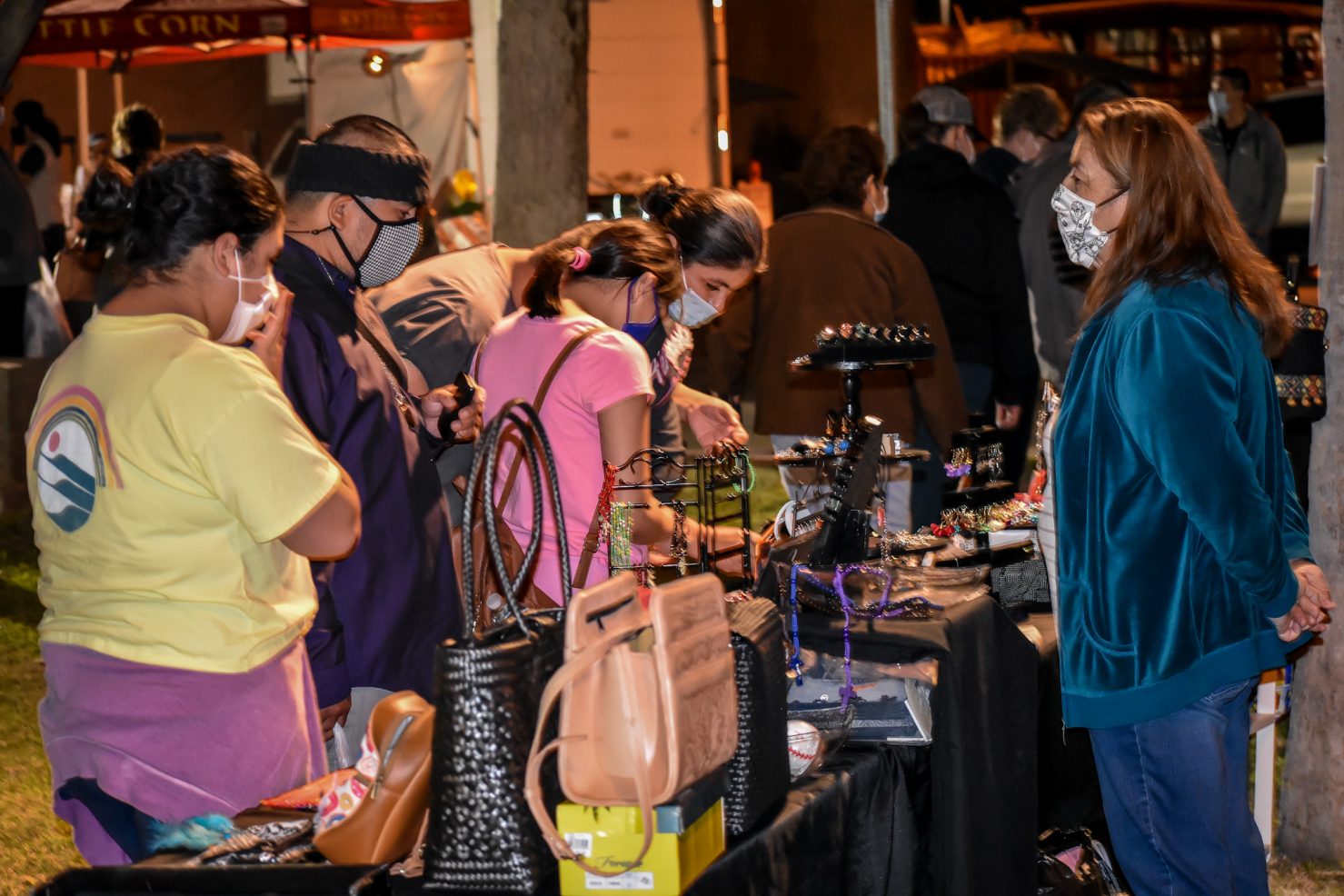 HOLTVILLE — A sizeable crowd of shoppers and vendors turned out on Thursday, Oct. 29, for the first of the city of Holtville’s two farmers markets scheduled to be held at Holt Park.

The outdoor gathering appeared to have provided eventgoers with some respite from the ongoing restrictions against large social gatherings amid the COVID-19 pandemic.

“You get to have that social interaction that everybody’s missing so much,” El Centro resident and vendor Carmenlidia Spurlock said. “You can tell people are really enjoying this.”

For the past year and a half, Spurlock has been making all sorts of jewelry using stones that she acquires in Mexicali and Quartzite, Ariz. She uses a pair of crimpers and tweezers to transform bits of blue lapis, amethyst, black obsidian, tiger eye, and sandstone into bracelets, necklaces, earrings, and pendants.

The farmers market represented the second time Spurlock had attended a local community event to sell her handmade jewelry. Last year, she attended the Westmorland Honey Festival, where sales were brisk.

Martinez’s typical go-to outdoor community marketplace, the Palm Springs VillageFest, has been shuttered since mid-March on account of COVID-19, leaving her with limited options for open-air shopping and socializing.

“This is kind of the first street fair I’ve been to since the shutdown,” Martinez said.

Yet, she made sure to follow social distancing guidelines and even had plans to eat her tacos on her mother’s porch, to avoid potentially placing her elderly parents at risk of exposure.

A dedicated entrance and exit to the venue were established to guide patrons in a one-way direction as they perused the wares of the numerous vendors that ringed Holt Park. Hand-sanitizing stations were also incorporated at regular intervals along the path and organizers dispensed with any attraction or amenity that might prompt people to linger for too long on the premises.

Calexico resident and AmeriCorps volunteer Paola Sanchez helped direct patrons onto the correct path during the event. Though she, too, has rarely left her home over the last several months, the event seemed to her like the perfect opportunity to venture out.

“I’m here to help and for a good cause and to be more active,” Sanchez said.

Sisters Alicia Salgado and Jessica Preciado were also on hand during the event and brought along a young family in a baby stroller to enjoy the evening outdoors.

The lifelong Holtville residents said they knew many of the vendors and patrons who were in attendance, which further added to the evening’s pleasantries.

Helping to further draw in community members, a temporary flu-vaccination clinic was set up inside the Civic Center by CVS Pharmacy. Later, a virtual City Council candidate forum would take place inside the center and be streamed live on the Holtville Chamber of Commerce’s YouTube channel.

The event’s overall atmosphere was a welcome relief for Valley resident and vendor Brandy Butler, who in the past had attended the city’s previous farmers markets as a vendor.

Being out in the public in a relatively large gathering amid the pandemic was not an issue for Butler, who had set up her booth with her DVTD products at the Lisa Tucker Center in Imperial a week prior.

“I’m enjoying the outdoors and beautiful weather and a little more normalcy in our lives,” she said. “It’s been a great way to meet new people and be around the community.”

A second farmers market is schedule for Nov. 11, Veterans Day. In the past, the holiday had typically featured a parade as well, but will not this year because of ongoing restrictions against large public gatherings.

One of the engines will travel on the city’s north-south streets, another on its east-west avenues, and a third dispatched to the Smith subdivision on the western part of the city, City Manager Nick Wells said during the City Council’s Oct. 26 meeting.

Plans call for the caravans to get underway at 3:30 p.m. and arrive at Holt Park at about 4:30 p.m., and for having some council members riding in each of the vehicles, Wells said.

Next
Holtville Council Candidates Square Off in Virtual Forum