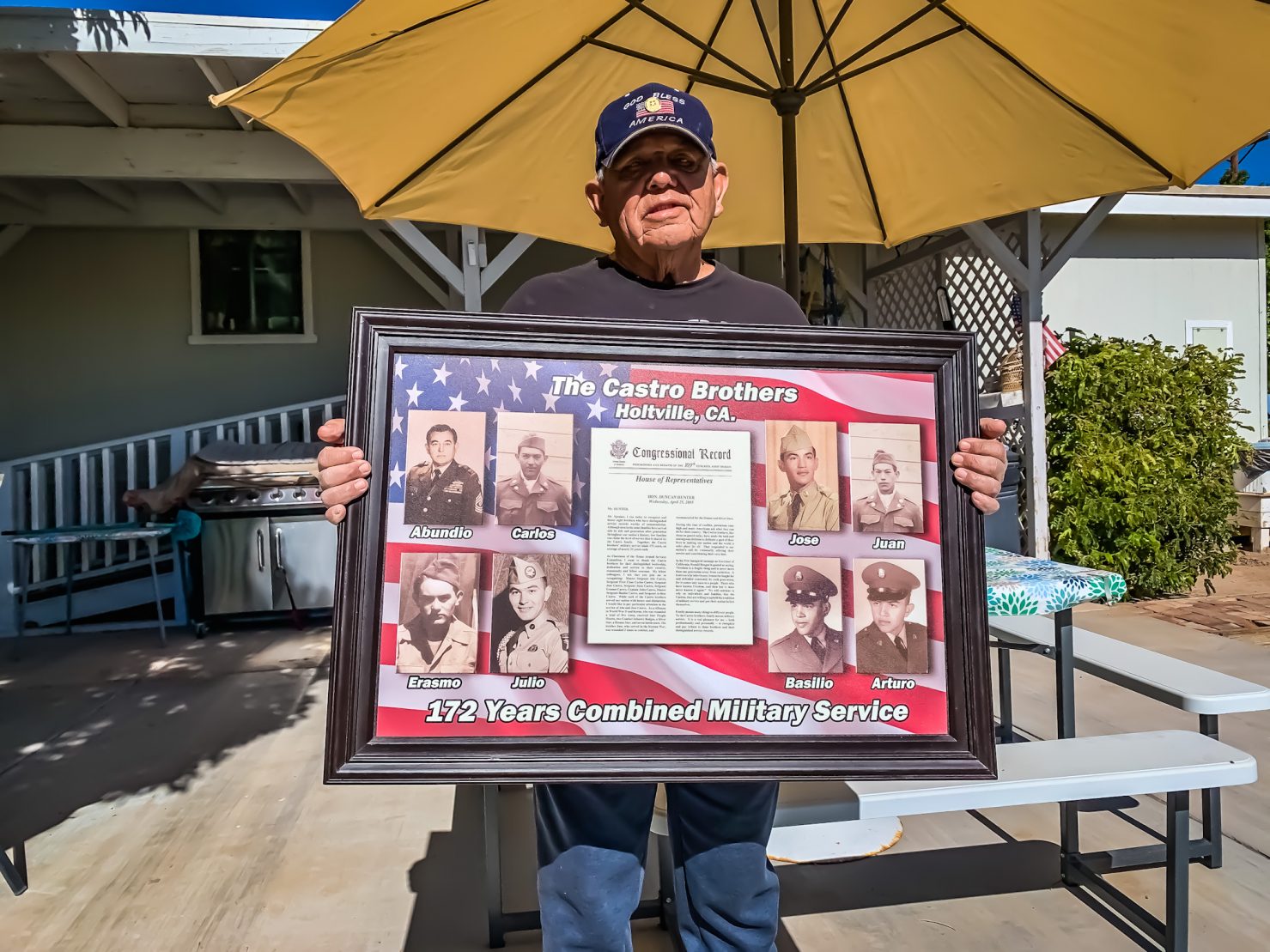 On Tuesday, Nov. 10, Holtville resident and proud U.S. Army veteran Basilio Castro shows his recognition plaque with photos of his brothers, all of whom are military veterans. Together, the Castro brothers have a combined military service of 172 years. The retired master sergeant was to participate in the Veterans Day events in Holtville on Wednesday, Nov. 11. | CORISSA IBARRA PHOTO
Home
Featured Stories
In Featured StoriesLocal News

HOLTVILLE — The ongoing pandemic has proven to be no match for the city of Holtville’s annual Veterans Day tradition of honoring community members who have served in the armed forces.

This year, the city of Holtville organized a vehicle caravan that was to be led by Holtville Fire Department fire engines in place of the holiday’s annual downtown parade.

Though the caravan was expected to be much smaller in scale, it was accompanied by no less a collective sense of excitement in the days preceding Veterans Day.

“It’s amazing to see the people that come out and support our veterans,” said Rosie Allegranza, Holtville Chamber of Commerce chief executive officer, on Tuesday, Nov. 10. “Holtville has great pride in that.”

City Council members were expected to join the caravan as well, with some riding in the Fire Department vehicles and others in their personal vehicles along with their respective spouses and family members.

Joining the caravan will be retired Army Master Sgt. Basilio Castro. The 81-year-old is one of eight male siblings who have served in the Army and who together have a combined 172 years of service.

Castro will be joined in his pickup by four of his siblings, including Jimmy, Arthur and Juan, all retired sergeants, and Julio, a retired captain.

The highly patriotic family looks forward to the city’s Veterans Day celebrations and paying tribute to members of the community who have served in the nation’s armed forces.

The Castro brothers are also longtime members of the American Legion Bradley-Keffer Post 138 in Holtville, where Basilio has served as treasurer. Aside from taking part in Veterans Day events, the brothers regularly phone other local elderly veterans to help keep everyone in good cheer, Castro said.

The auxiliary will have a vendor’s booth at the farmers market that is scheduled from 4:30 to 7:30 p.m. Wednesday, Nov. 11, following the completion of the caravan’s circuitous route through the streets of Holtville.

Auxiliary members will be selling handmade red poppy flowers that are a symbolic tribute to those who have died in combat, Gibbs said. Proceeds from the sales will also further support veterans across the nation.

“That gives them some income to help out their families,” Gibbs said.

The city-sponsored Veterans Day event was to be further commemorated on the morning of Nov. 11 by the placement of American flags throughout the city by Holtville High football coach Jason Turner and the Holtville Vikings squad.

The caravan was scheduled to start at 3:30 p.m. Nov. 11 at the intersection of Beale Avenue and Seventh Street and reach Holt Park about 4:30 p.m.

The park will host a farmers market, where free flu shots for veterans and family members 65 and under were to be provided by CVS Pharmacy, the city of Holtville’s Facebook page stated.