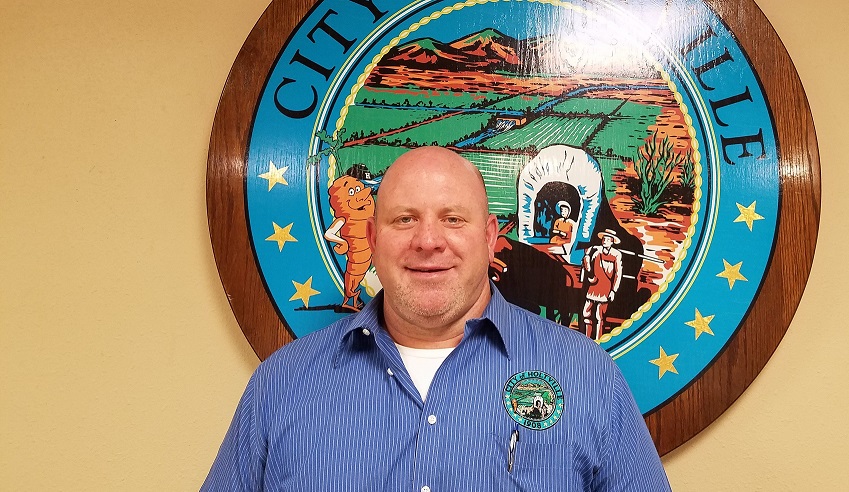 HOLTVILLE — Ever since the city of Holtville began to employ city managers in the late 1980s, some have served for as briefly as less than three months, while a few others’ tenures had extended beyond five years.

But none have been employed for as long as current City Manager Nick Wells, who in September marked his six-year anniversary and became the city’s longest-serving head administrator during that era.

And though other local city officials have attempted through the years to lure him away to fill their respective vacant city manager positions, Wells isn’t likely to budge any time soon.

“I’ve really made a conscious decision to stay here,” Wells said during an Oct. 28 phone interview. “I am kind of a small-town kind of guy.”

The Holtville native’s employment with the city began in 2011, when Wells was hired as the city’s finance manager. Technically, Wells didn’t apply for the position, and instead had applied for the city manager’s position.

An accountant by trade, Wells admittedly did not have the formal experience typically required to serve as city manager, but he had a fervent desire to do so.

“That was something I was always interested in,” he said.

Following his interview with city officials for the city manager position, they encouraged Wells to apply to be the city’s finance manager instead, so that he could familiarize himself with municipal affairs and gain experience in the event the top spot became available.

That opportune moment came in September 2014, with the resignation of former City Manager Alex Meyerhoff. The time Wells had spent as finance manager also proved advantageous as he transitioned into his new role.

“To this day I tell people I know more about the city of Holtville’s finances than anybody,” he said. “I have an intrinsic knowledge about what the finances of the city are and what we can undertake and pull off.”

Wells’ financial know-how is evident in the growth of the city’s reserve fund. Today, it stands at about $1.5 million, he said, compared to the approximate $500,000 it totaled in 2011, when he initially came aboard.

As city manager, Wells oversees some 25 full-time employees, about 10 part-time employees, who are mostly employed with the Holtville Fire Department, and a general fund budget of about $2.7 million.

His 10 years with the city places him in the middle in terms of employee seniority, with about half of the city’s workers having been employed for a longer period and the other half representing more recent hires. A sizable sample of Holtville natives are also included among his co-workers.

“That’s been one of the greatest things about working here,” Wells said. “There’s a bunch of Holtville people here.”

Holtville Fire Chief Alex Silva is one of those hometown colleagues. Both he and Wells attended Holtville High around the same, though Silva’s grade level was a few years advanced and they were part of different social circles.

Nowadays, their professional relationship requires constant communication and collaboration, which is aided by Wells’ open-door policy and genuine concern for the city’s best interests, Silva said.

During his time of employment with the city, Silva has worked for at least six different city managers, three of whose tenure’s coincided with Silva’s time as fire chief.

Retaining a city manager for a prolonged duration not only adds stability but allows the city’s workforce to better understand the executive’s expectations.

“Once you get to know the city manager’s ways, it makes it easier to work with,” Silva said during a Nov. 6 phone interview. “We might have our differences, but we always lean towards what’s best for the city.”

At present, what’s best for the city is its continued growth, Wells said. His vision is a departure of sorts from the mild form of “isolationism” that in the past some city leaders and residents had preferred.

Wells’ 2014 appointment as city manager occurred shortly after the opening of the Family Dollar store and the development of additional single-family homes in the city. Since then, he has presided over the opening of Dollar General, Raspados Chuchis, Auto Zone, Baja Desert Tire Co., Keithly-Williams Seeds, and Sun Community Federal Credit Union.

“We’re trying to keep things moving forward,” Wells said. “Having access to the essentials in town allows for that kind of growth.”

Moving things forward also requires a significant boost in population for Holtville, which stood at more than 6,600 in 2019, according to the Census Bureau QuickFacts website. Wells said he would like to see the city’s population reach at least 10,000, which would require additional housing.

The added housing stock would increase the number of water and sewer connections and in turn help lower the overall expenses associated with the delivery, maintenance and complying with water-quality standards for those public services.

“While we haven’t had great leaps and bounds of growth in regard to housing, we have had some incremental growth,” Wells said.

Following his graduation from Holtville High in 1986, Wells enrolled at California State University, Fresno, where he majored in agricultural business with an emphasis in accounting. He remained in the Central Valley city for about 20 years after his graduation, working as an accountant for agricultural produce companies.

A desire to be closer to family had prompted Wells, the second-oldest of eight siblings, to return to the Valley in 2006. Considering the close personal and professional relationships he had established in Fresno, Wells’ decision was not made without reservations.

“If not for the fact that I had such a large family down here that I missed being around, I may have stayed indefinitely,” he said. “Fresno will always be my second home.”

Another of Wells’ memorable journeys includes a stint living in Nashville, Tenn., where he pursued a career as a singer. Growing up, about the only thing he liked better than listening to the radio was singing along to it.

Eventually, his talent for singing was validated by a crowd at a karaoke contest whose prize was a pair of concert tickets that Wells was hoping to win. His newfound passion then drew him to Nashville, where despite the fun and success he enjoyed, did not become his permanent home.

“I decided at some point that I couldn’t do that forever, so I came back home,” said Wells, who countless locals have enjoyed seeing perform with the Big Bad Wolf Band.

Wells said he credits his father, whose background was in accounting, for steering him into a similar career field.

During his time with the city, Wells has weathered his share of financial shortfalls. The first came about 10 years ago, when former Gov. Jerry Brown disbanded the redevelopment agencies (RDAs) statewide.

The RDAs were established to redevelop blighted areas and were funded by a portion of a city’s property taxes. In turn, the state had subsidized the funds that cities had diverted toward their respective RDAs.

More recently, the city’s contract for managerial services with the Imperial Valley Regional Detention Center near the Calexico East Port of Entry came to an end after state legislation was enacted prohibiting cities from extending such existing contracts.

Then and now, his understanding of the city’s fiscal trends has allowed him to identify potential cost-saving measures and, just as importantly, assure department heads that the reduced budgets are not meant to be permanent. “We’re realistic about those things,” Wells said. “When you get down to it, the city is a business.”