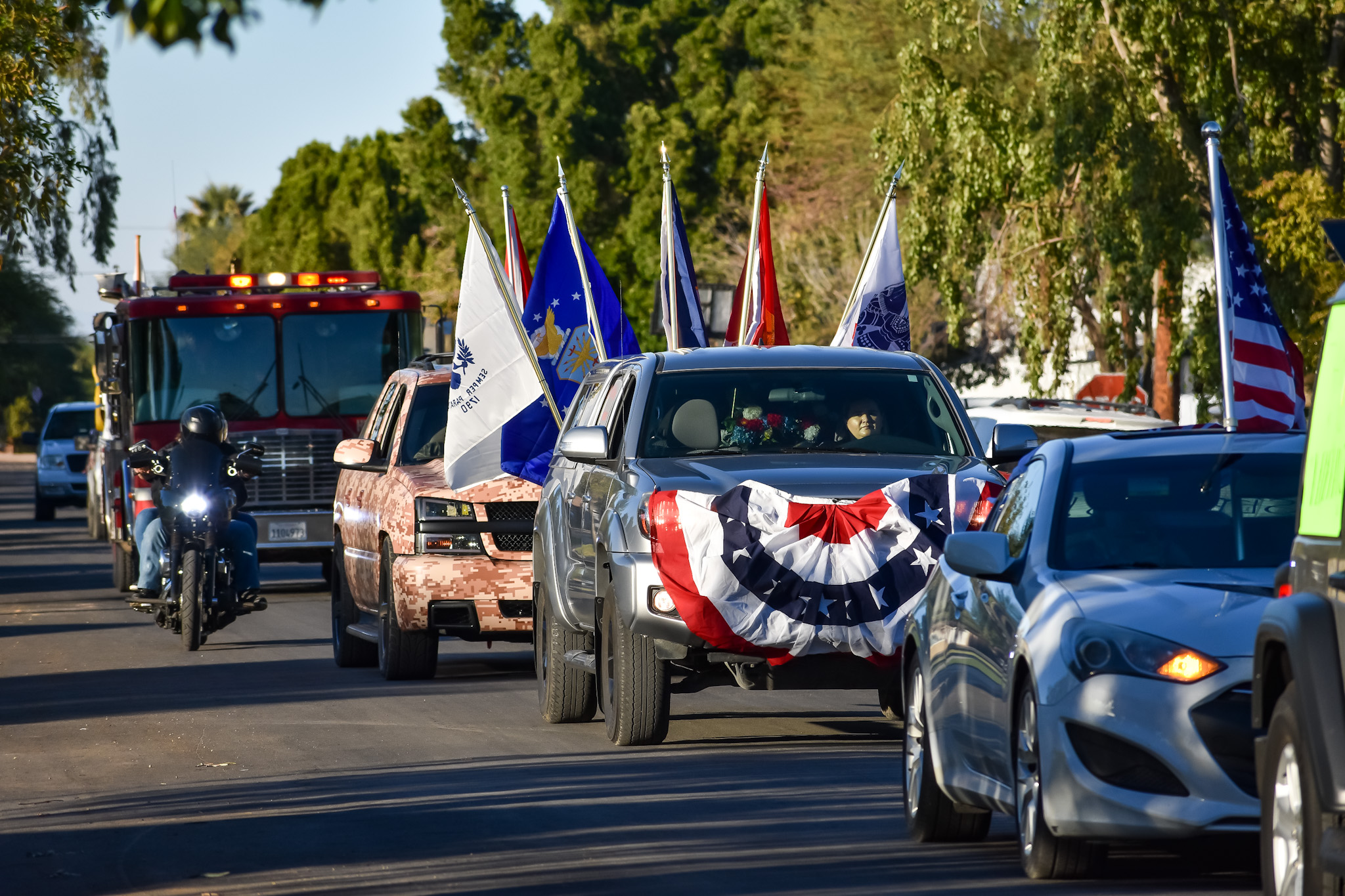 HOLTVILLE — An equally enthusiastic and patriotic crowd of residents lined streets throughout Holtville on Wednesday, Nov. 11, to cheer on a caravan of vehicles that was enlisted to commemorate Veterans Day.

Holtville resident Amanda Trujillo adorned her vehicle with red, white, and blue decorations for the occasion and was among the more than three dozen vehicles and motorcycles that participated in the event.

She was joined by her 8-year-old granddaughter, Kaelyn Trujillo, who was tasked with waving an American flag at the residents they encountered during their caravan’s route.

Trujillo counts two brothers, one of whom had served in Vietnam and another who was stationed in Germany, as well as a nephew who is currently in Iraq, as the veterans in her family.

“Veterans Day is a time to honor our men and women in service and give them thanks,” Trujillo said.

The city-sponsored Veterans Day event got underway shortly after 3:30 p.m. and consisted of three separate caravans that were assigned to pass through different areas of the city.

As the caravans departed the staging area at Seventh Street and Beale Avenue, Leonore Angelica Gonzalez could be found waving an American flag at the corner of Fig Avenue and Seventh Street.

The Norwalk resident said she was visiting her son, who lives in Holtville, and was joined at the street corner by her daughter-in-law and granddaughter.

In past years, Gonzalez and her family have made it a point to visit locations near her home that are hosting Veterans Day events or ceremonies.

She, too, counts a brother as a veteran, and holds those who have served and continue to serve in the nation’s armed forces in high regard.

“They deserve our respect,” Gonzalez said.

David Ramirez also expressed a similar respect for service members as he waited in front of his Fern Avenue home for one of the caravans to pass by.

Joining him in the wait were his wife and two children, one of whom held a large American flag that Ramirez said is typically displayed year-round on his porch.

The Brawley native said that both he and his wife have family and friends who are veterans and that the city’s annual Veterans Day parade has been a cherished family affair for the past several years.

While it was disappointing for him and understandable for the city to cancel its annual parade amid the pandemic, he said the caravan was a welcome alternative.

“I think it’s awesome that they’re still trying to do stuff for the people in town,” Ramirez said. “What else can we ask for?”

Each of the three caravans that traversed the city were led by a Holtville Fire Department fire engine. Rounding out the processions were several Imperial County Sheriff’s Office vehicles, members of the Blue Knights International Law Enforcement Motorcycle Club and community members in their vehicles.

Fire Chief Alex Silva said he was grateful for the strong showing of participants, as well as for the city leaders’ commitment to hosting such an event.

“That’s what makes Holtville so special,” Silva said. “They always go out of their way to help the community.”

Though his time on the City Council preceded the city’s annual Veterans Day Parade, Holtville resident and former mayor David Zinn has since become a regular parade attendee. On Nov. 11, he walked from the caravan’s staging area to Holt Park, the processions’ endpoint and where a farmers market was in full swing.

The Army veteran said he chose to enlist right out of high school, instead of waiting to be drafted. And he came close to serving in Vietnam but was directed to remain stateside at one of the last possible moments before deployment.

Instead of experiencing any combat himself, as a volunteer in the amputee ward at Madigan Army Medical Center in Joint Base Lewis-McChord, Wash., Zinn said he nonetheless got a closeup view of the dangers of war.

“There was some stuff that was … pretty bad,” Zinn hesitantly said.