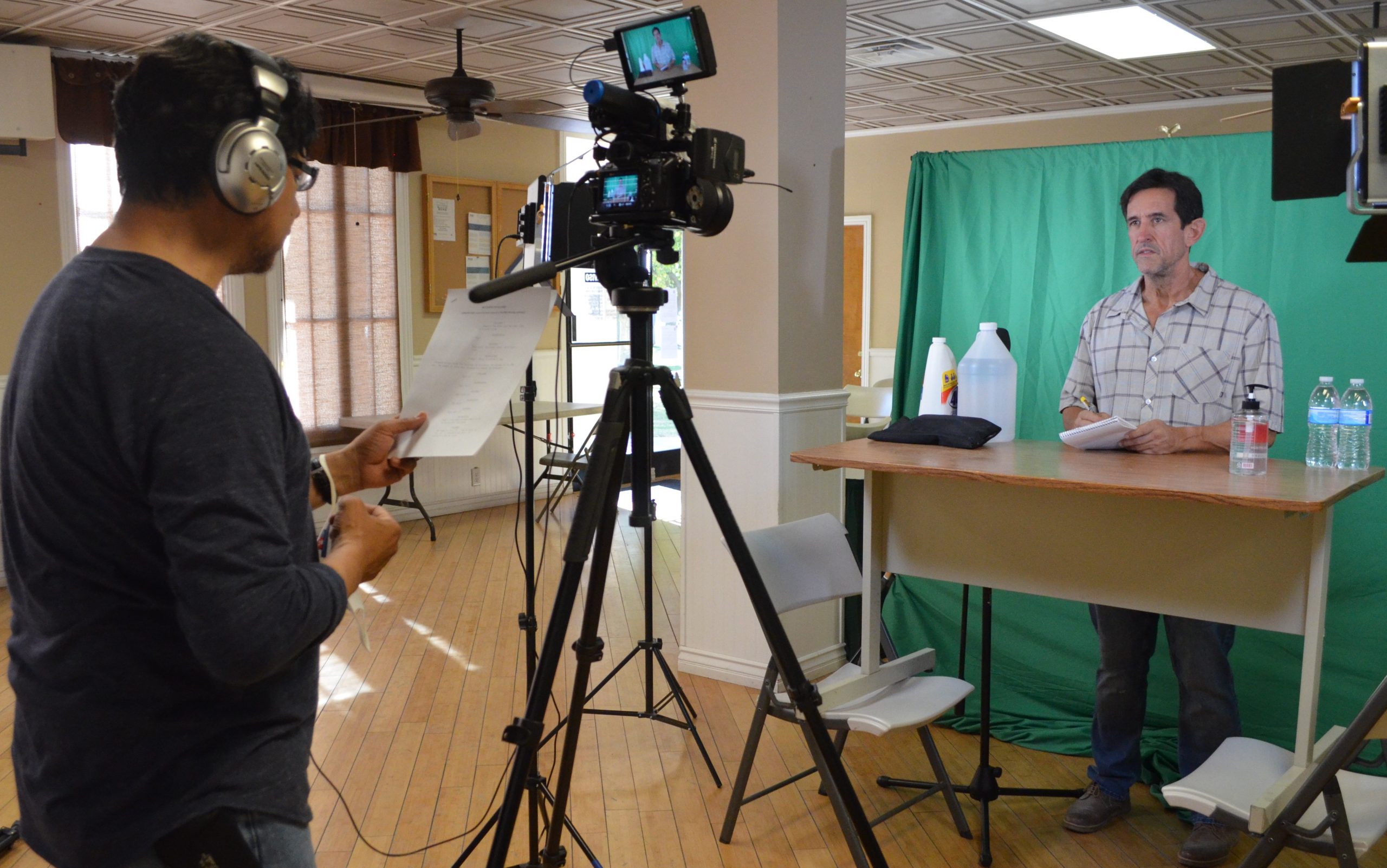 Former Holtville resident Felipe Irigoyen (right) is filmed by Roy Dorantes reenacting a movie scene from “No Country for Old Men” on Thursday, Nov. 12, at the Civic Center in Holtville for a fundraiser to benefit COVID-19 patients who receive meals during quarantine. Their efforts will be streamed as part of the Meals to Heal fundraiser on the Vo Medical Center’s Facebook page at 5 p.m. Sunday, Nov. 16. | JULIO MORALES PHOTO
Home
COVID-19
In COVID-19Local News

HOLTVILLE — A hay broker by day, former longtime Holtville resident Felipe Irigoyen is also a self-confessed “shy guy” who often seeks out situations that place him squarely in the public’s eye.

Some past endeavors have included theater acting, tap dancing and a 2016 appearance in the Imperial Valley Regional Occupational Program’s Dancing with the Stars Gala.

On Thursday, Nov. 12, Irigoyen once again subjected himself to public scrutiny, this time to support a good cause amid the pandemic.

Irigoyen was one of six local individuals from throughout the Valley who volunteered to film a two-minute scene from a popular movie as part of a fundraising effort benefitting local COVID-19 patients in quarantine.

For those two minutes, Irigoyen transformed himself into the gas station clerk whose life hangs on the outcome of a coin toss by a ruthless hitman, played by Javier Bardem, in “No Country for Old Men.”

“I enjoy these things because it’s a challenge,” Irigoyen said once filming had wrapped after just two takes. “This is my way of getting involved and my way of doing things in front of people to give me the self-confidence.”

The filming was also his way of helping raise funds for the Dr. Vo Medical Center’s Meals to Heal program, which has volunteers delivering meals to quarantined COVID-19 patients throughout the Valley.

“I thought it was a very good cause,” Irigoyen said Monday, Nov. 16, a day after the online release of his scene reenactment. “And I was happy to be a part of it.”

The meal-delivery program has averaged more than 60 COVID-positive patients a day, and an equal number of volunteers, said Dr. Tien Vo.

Its efforts have been made possible by $8,000 it has received from private sponsors, $11,000 from the Vo Medical Center and $26,000 from the nonprofit Imperial Valley Wellness Foundation, Vo said in an email Nov. 13.

The Meals to Heal program had gotten underway on May 10, with Vo Medical Center funds. About a month later, funds from the private sponsors helped the program continue.

The medical clinic’s fundraising campaign comes at a time when the Valley is experiencing an increase in COVID-19 cases. On Monday, Nov. 16, the Imperial County Public Health Department reported 677 total active positive cases, compared to the 458 the agency reported on Nov. 6.

“We are still waiting for the IV Wellness Foundation to approve another $36,000 to provide more meals till February 2021,” Vo stated in the email.

With operational funds running low, the nonprofit Vo Neighborhood Medical Clinic partnered with local filmmaker Roy Dorantes for a fundraising campaign that also aims to remind the public about the need to follow health and safety guidelines to combat the spread of COVID-19.

To recreate the two-minute scenes, Dorantes first had to cast the local on-screen talent. With the help of well-placed individuals in the cities of Holtville, Brawley, Calexico, Calipatria, El Centro, and Imperial, a list was quickly compiled.

Aside from a couple of suggestions from Dorantes, Irigoyen hardly needed any coaching at all during filming, which only took two takes.

“It wasn’t this easy with some of the others,” Dorantes said with a laugh.

Dorantes stood off camera during the filming inside the Holtville Civic Center, reading the lines of the movie character with whom the six locals respectively share an on-screen dialogue. Besides “No Country for Old Men,” movie scenes were selected from “Mrs. Doubtfire,” “The Godfather,” “On the Waterfront,” “Pulp Fiction,” and “21 Grams.”

Dorantes’ counterpart in Los Angeles filmed the six actors who have also lent their talent to the fundraiser and include Jesse Celedon, Stephanie Chloe Hepner, E. Ambriz Decolosio and Alexander Stone. Their clips were then sent to Dorantes so that he could edit them together to recreate the two-minute scenes.

Rosie Allegranza, Holtville Chamber of Commerce chief executive officer, was the one who placed Dorantes in contact with Irigoyen, who she knew was no stranger to acting and performing.

“I was very impressed,” Allegranza said Nov. 16, after having watched the movie scene reenactments. “There were a few who did very well.”

Allegranza also expressed gratitude for the Meals to Heal program and the medical clinic’s fundraising effort.

“I think it’s great for the community,” she said.

As part of the Meals to Heal fundraiser, the six recreated movie scenes were streamed on the Vo Medical Center’s Facebook page Sunday, Nov. 16. The viewing public was encouraged to vote for best actor, best actress and best performance.

At 10 a.m. Nov. 29, the six scenes will be broadcast on the local NBC channel, where the winners for best actor, best actress and best performance will also be announced, Dorantes said.

Those interested in donating to the Meals to Heal program can do so by making a tax-deductible contribution to the Vo Neighborhood Medical clinic, which is a nonprofit organization with 501(c3) status, Vo said.

Dorantes said he would like to collect about $10,000 for the Meals to Heal program, which costs about $10,000 a month to operate. Donors can also find a direct link to the fundraiser on his Facebook page, which as of Nov. 16 had raised $340 toward his goal.

“Whatever the public can help us with is good,” Dorantes said.

Those looking for more information about the fundraiser and the Meals to Heal program can contact him at 760-234-1940.