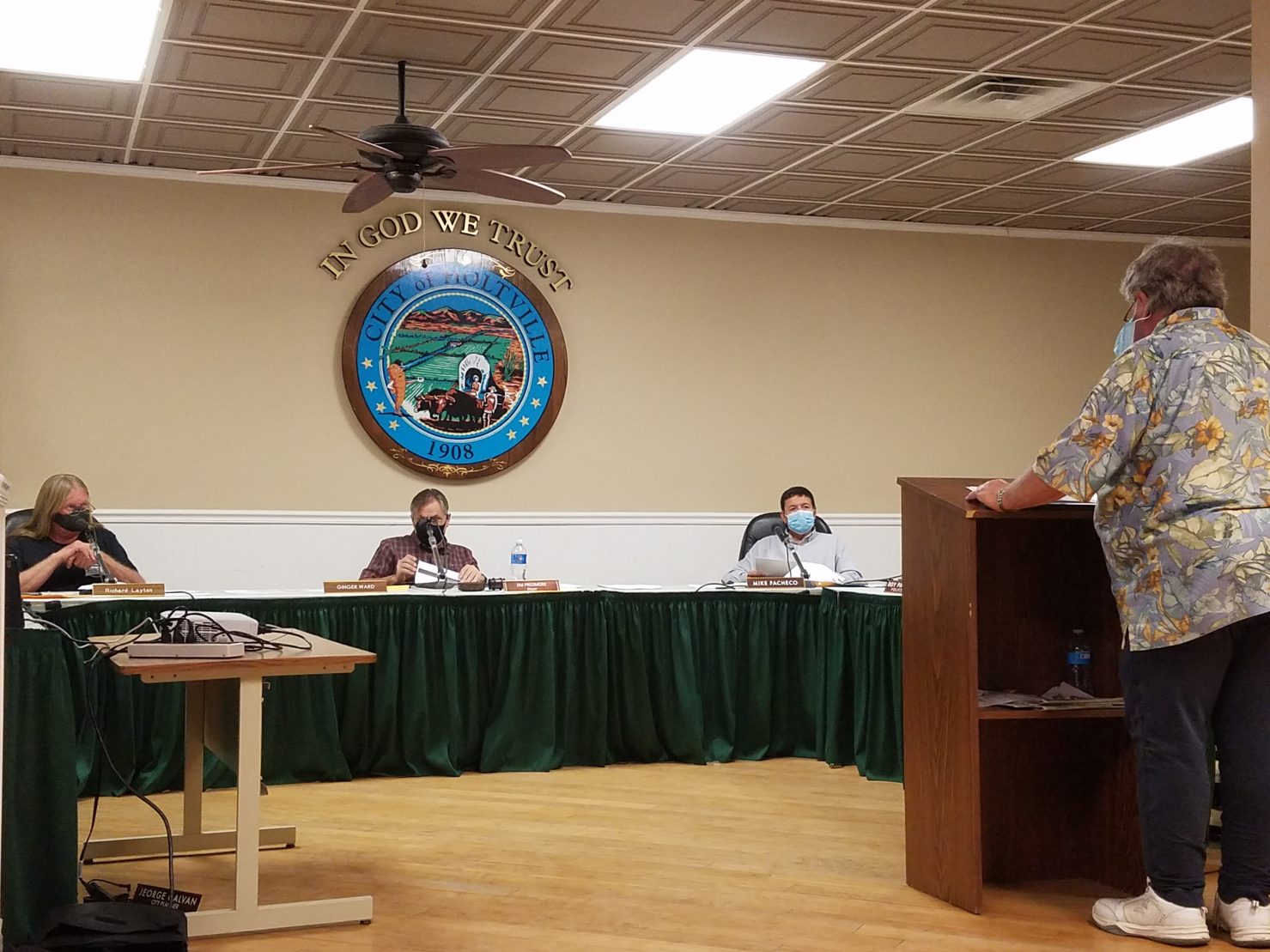 HOLTVILLE — The Holtville City Council unanimously approved a series of actions during its Monday, Nov. 23, regular meeting that pave the way for the potential development of a gated community at the northeast corner of Melon Road and Ninth Street.

The proposed construction of an 86-unit housing development at the site represents a compromise by property owner and Holtville resident John Hawk, who had encountered opposition to his previous proposal to construct a 152-unit apartment complex in the rural area.

Hawk’s original plan for the Melon Properties site had faced pushback from the public during an Oct. 19 city Planning Commission meeting, and prompted the commission to approve an R-2 zoning designation instead of the R-3 designation Hawk had sought and which would’ve allowed for high-density housing to be built.

Instead of appealing the Planning Commission’s decision, Hawk had chosen to amend his original proposal, Tom DuBose of the DuBose Design Group said during the public hearing portion of Monday’s council meeting.

“We now believe that the best vision of this particular property is to make it a gated community,” DuBose said.

The council’s approval of the proposed project stemmed from a resolution that in sum authorized the annexation of about eight acres of unincorporated county land, designated the parcels as R-2 zoning allowing for single-family and medium-density housing, established a tax property agreement with the county, and approved the proposed development’s mitigated negative declaration regarding its environmental impact.

The proposed housing development could be comprised possibly of 21 single-family homes, 10 units of “four-plexes,” and three buildings housing a total of 12 townhomes, according to a conceptual design plan DuBose shared during his presentation.

The conceptual design is a work in progress and plans call for Hawk, the property owner, to submit a site plan soon for potential approval by the Planning Commission and City Council, DuBose said.

DuBose said attempting to achieve compliance with the eight-unit per acre maximum housing density allowed under the R-2 designation would be challenging but that Hawk remains committed to being flexible.

“It’s always been his vision to provide some new housing,” DuBose said.

As it is currently conceptually designed, the development exceeds the R-2 designation’s maximum housing density of 64 housing units. Additionally, four-plex townhomes are not allowed in R-2 zoning designations but could potentially be approved during the site plan review process, City Manager Nick Wells said.

“At this point this (conceptual design) doesn’t even work because it pushes the density over what is allowed right now,” Wells said.

Council member Mike Goodsell, who attended the meeting virtually, said that he was glad to see Hawk had decided to forego plans to build high-density apartments at the site at a time when the city is in need of additional single-family homes.

“I can see a way forward on this,” Goodsell said.

Similarly, council member Richard Layton said that even though the proposed development represented medium-density housing, it nearly halved the number of housing units that initially had been proposed and which had elicited concerns from the nearby rural community.

While the proposed project did not attract the same level of public criticism that the 152-unit apartment complex proposal had, at least one nearby resident spoke about the project’s potential impact to the rural atmosphere of that area, and how increased residential traffic could clash with the constant flow of agricultural activity on the roadways.

The proposed project would have two gated entrances, one on Tenth Street and the other on Melon Road, that would also be accessible to the city’s police and fire departments.

Within the gated community, a homeowners’ association would be established to maintain the development’s privately owned streets and common areas, DuBose said.

The single-family homes would include small, enclosed yards. Each housing unit would have a two-car garage and driveway. The housing units would occupy about 4,500 square feet per lot but could range between 3,500 and 5,000 square feet and have an average of about 1,250 square feet of living space, DuBose said.

The “compact, but efficient” homes would be attractive to those interested in purchasing a starter home, or to existing homeowners in Holtville who may be looking to downsize, which in turn would place those larger sought-after single-family homes on the market.

“I think this is the benefit of this new development,” DuBose said.