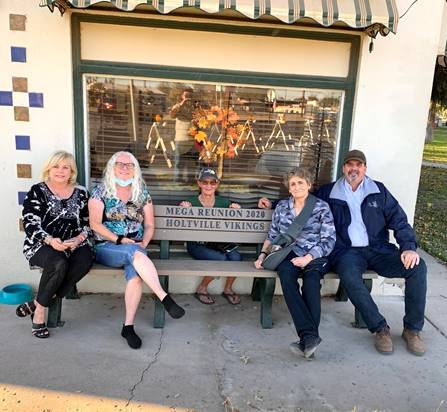 The Viking Mega Reunion Committee members recently got together to christen a new bench the committee purchased for the Holtville Chamber of Commerce. The bench was purchased with excess funds left over from this year’s “mega reunion,” according to a press release.

The bench is in front of the Holtville chamber building.

Other organizations benefiting from the excess funds were the Holtville Athletic Club, Sheriff’s Explorers, Boy Scouts of America, and the Holtville High School Band.

This year’s reunion was the third and final mega reunion. The first was held in 2011 and was the brainchild of Brooks Anderholt. There were more than 30 alumni on the first committee, which did a great job locating classmates from the decade from which they graduated. The result was attendance of about 900 people. The oldest attendee was Jewel Vencill from the class of 1934.

The Holtville Athletic Club catered a delicious meal and served for dessert its famous homemade ice cream at each mega reunion. Along with the meal, the price of the ticket included access to the museum, live music and dancing, a bar and a photo booth.

“But best of all was the chance of seeing classmates that hadn’t been seen in a very long time. All in a setting of the Historical Society Pioneers’ Museum’s buildings and spacious grounds,” according to the release.

Some of the Viking ladies organize a reunion float for the Carrot Festival Parade each reunion, offering another chance to gather with classmates. Staff from Holtville High organized a guided tour of the campus, which drew large groups of alumni. Several classes took advantage of so many of their classmates being in town for the reunion and had their own mini-reunions on a Friday evening.

From those excess funds, donations were made to the Holtville Fire Department Explorers for their services, the Holtville High Band Boosters, Holtville Touchdown Club, and the Imperial County Historical Society.

The second mega reunion was held in 2015. Although there were only half as many committee members involved, they did an excellent job tracking down alumni from classes from the 1940s through the 1980s. The venue and all the amenities were the same as the first mega reunion. That year, about 614 people attended.

Excess funds benefitted the Sheriff’s Explorers, the Holtville High Hall of Fame/Walk of Fame, the Historical Society, the Band Boosters and Holtville High in general.

By the third mega reunion, held in 2020, there were just 10 on the committee. Nevertheless, the reunion was a success with 533 in attendance. The first reunion pulled in the largest number of alumni but the other two managed to add first-time attendees.

“Everyone had a wonderful time whether attending one, two, or all three of the reunions,” according to the release.

Without Mark Allegranza, none of the mega reunions would have been possible, the release states.

Previous
Lithium Valley: A Look at the Potential of Lithium

Next
Celebrating Low-Risk Holidays with Family Through Technology