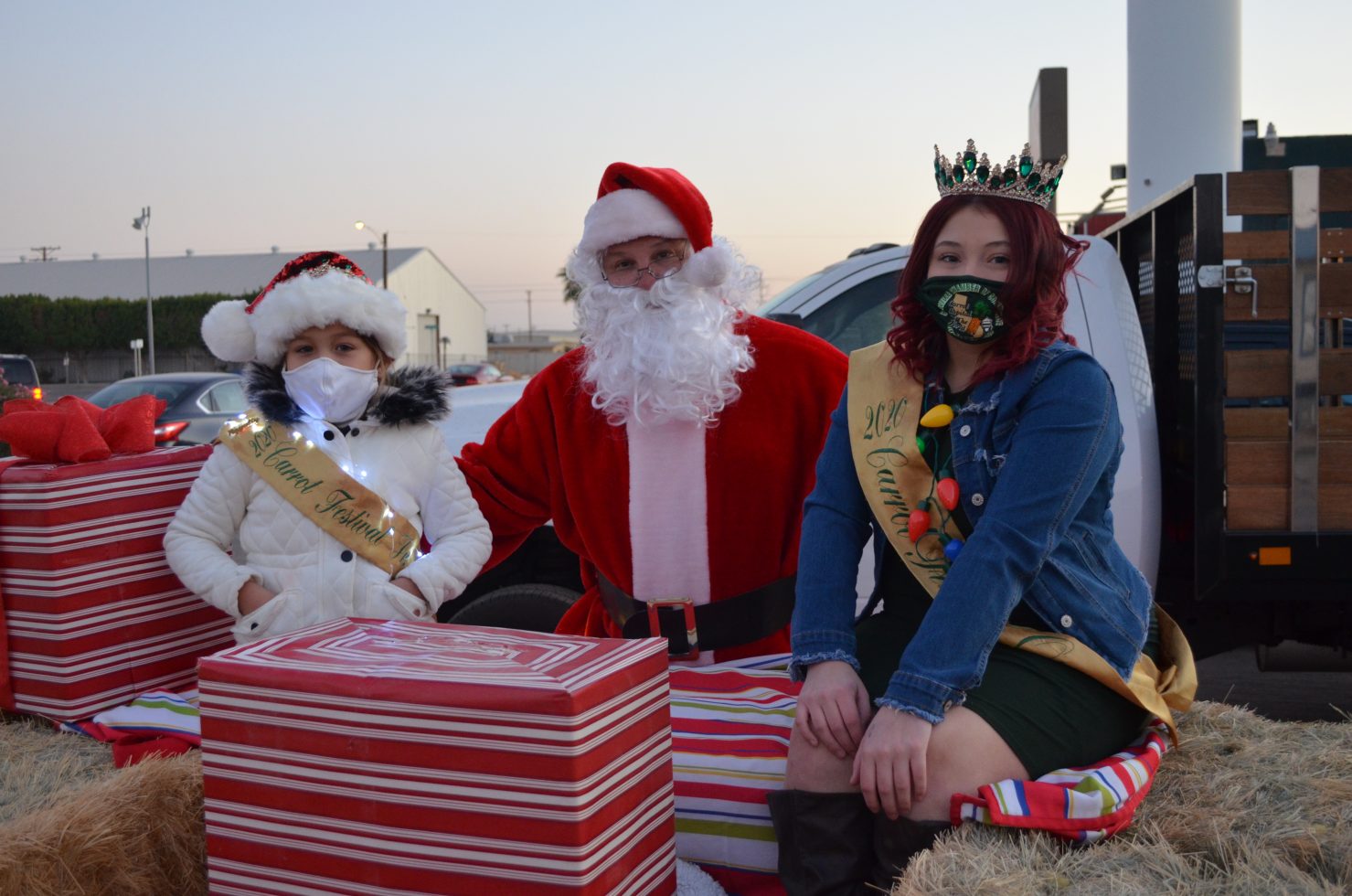 HOLTVILLE — Countless Holtville residents lined the streets in front of their homes last week to catch a glimpse of Santa Claus parade through town with his merry entourage.

For the occasion, Santa substituted his normal team of reindeer and sleigh with public safety officials and emergency vehicles and was joined by the Carrot Festival court royalty as well.

The mini parade on Thursday, Dec. 10, proved to be a hit with residents and was organized in place of the city and Holtville Chamber of Commerce’s annual Christmas in the Park and tree-lighting event at Holt Park, which was cancelled on account of COVID-19.

“I think this is the start of a new tradition in Holtville,” said Rosie Allegranza, chamber chief executive officer, on Friday, Dec. 11.

The idea for the holiday parade originated with Holtville Fire Chief Alex Silva, who tasked Allegranza with procuring a trailer that could serve as Santa’s sleigh to be towed by one of the department’s vehicles.

Allegranza was able to borrow a trailer from her neighbor, Kevin Grizzle, while another neighbor, Danny Poloni, personally invited Santa to take part in Thursday’s event.

That the collaborative effort came together so quickly is “typical” of Holtville, Allegranza said.

“We all just band together and step up,” she said on the day of the event. “And we just wanted to spread some joy here in Holtville.”

Their joy-spreading plan included a predetermined route of travel that Santa and his entourage were going to take after leaving the fire station. Once they reached the city’s east side, they worked their way westward by cruising up and down the city’s north-south avenues.

Waiting for them in the 900 block of Chestnut Avenue was 7-year-old Bentley Lopez and his family. Though he had only gotten a glimpse of Santa’s emergency light-flashing caravan as it headed east on Ninth Street, it proved memorable enough for the youngster.

“I think I saw one of them,” Bentley said excitedly. However, Santa would later pass directly by Bentley’s home on his venture west.

In the 700 block of Beale Avenue, Erika Fregoso and her two young children, Emma and Kain, patiently waited for Santa along with other family and friends.

Fregoso said she became aware of the event after seeing it promoted on the city of Holtville’s Instagram account and decided to get her young kids in on the fun.

“This is their first year understanding who (Santa) is and knowing about Christmas,” she said. “They’re excited to see Santa and the mini parade.”

Nobody was probably more excited than siblings Athena, 4, and Daniel Mendez, 6, who anxiously waited for Santa in front of the Chestnut Village Apartments on East Seventh Street along with a strong showing of fellow Santa fanatics of all ages.

Though the pair had initially missed Santa when he passed by the apartment complex heading east on Seventh, they were quick to greet his entourage when it returned and turned into the complex.

After excitedly waving to and wishing Santa and the Carrot Festival court royalty a “Merry Christmas,” Athena and Daniel went scurrying down the sidewalk as Santa headed west on Seventh Street.

Afterward, their mother, Anais Luna, expressed gratitude for the event having brought her children such enjoyment.

“Thanks for the beautiful drive-through my kids are soooo happy they got to see Santa,” Luna wrote on the chamber’s Facebook page, which had livestreamed the event.

A day after the parade, Allegranza said she continued to receive messages and texts from residents who were grateful for the occasion.

One such message, from Kim Hester, described how much residents in the 700 block of Circle Drive appreciated the event.

“It brought neighbors together to wait for Santa and brought out the child in all of us if only for a little while,” Hester wrote to Allegranza. “Thanks so much.”

Original plans had called for Santa to make his citywide trek atop a Fire Department fire engine to be able to safely maneuver within the tight confines of apartment complex parking lots, whereas a truck and trailer would present more challenges.

But those plans changed when the fire engine had to respond to a call for emergency service just prior to the parade’s start, Chief Silva said.

Original plans had also anticipated the crosstown endeavor would last about an hour and a half. Instead, it clocked in around three hours and was quite an accomplishment for the entourage, considering the night’s cold temperatures and the fact that the Carrot Festival court royalty and Santa hadn’t had any dinner prior, Allegranza said.

2020 Carrot Festival Queen Alexis Piper said she enjoys giving back to the community as queen, much like she had before as a past junior princess. For that reason, the opportunity to take part in the mini parade was something that she was looking forward to. That, and another personal reason.

“It’s my favorite time of the year,” Alexis said moments before the mini parade got underway.