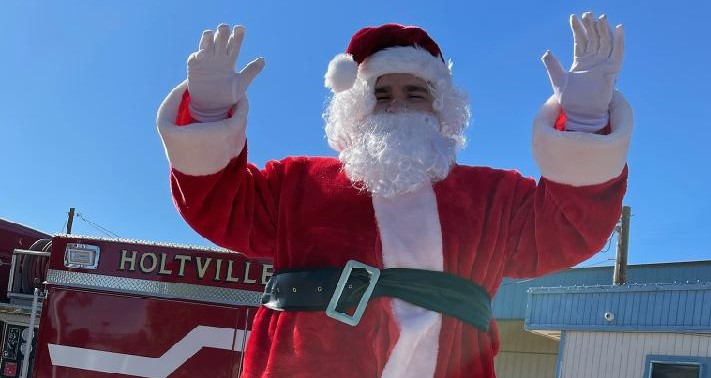 HOLTVILLE — More than 50 local children who were invited to the Holtville Fire Department on Monday, Dec. 21, went home with a pair of reindeer antlers and some spending cash thanks to the department’s annual Guardian Angel program.

The fabric antlers and $100 Walmart gift card were among the numerous holiday treats that the youngsters received during the event, which marked its seventh year and was organized as a drive-through on account of COVID-19.

All told, 52 less-fortunate students from the Holtville Unified School District were selected to take part in the annual program, or about twice as many as the previous year’s event.

The holiday tradition is a collaborative effort among the Fire Department, school district, and the community members who serve as sponsors.

“This Guardian Angel program is the best thing ever for Holtville,” said Patricia Burnworth of Burnworth Landscape Inc., one of the event’s seven sponsors.

Burnworth is also the mother of the late Jonathan Burnworth, a former Fire Department captain who died in 2018 in an accident while employed as an Imperial Irrigation District dive team member.

Jonathan, or “Jonny B the EMT” as he was also affectionately known, had a deep concern for children, said his mother, who was on hand during Monday’s event at the fire station.

Holtville Fire Chief Alex Silva recently rebranded the holiday initiative as the Jonny B Guardian Angels program in his honor.

“This was a very special time for him because he had a love for kids,” Patricia Burnworth said.

A GoFundMe account set up in Jonathan Burnworth’s honor was able to collect about $5,000 toward the Guardian Angels program. Patricia Burnworth said she has committed to funding the Fire Department’s activities on behalf of local youths and its Explorers for the following four years.

The 52 youngsters that took part in the program consisted of 30 students from Finley Elementary, 10 students from Pine School, and the rest from Holtville Middle School, Finley Principal Lupita Perez said.

“The annual event started small and got more donors and support,” Perez said on Dec. 21.

In the past, the Fire Department would provide participating children with a $100 gift card as well as another $100 worth of clothing. Because of the ongoing pandemic, Chief Silva said the decision was made to open the program up to twice as many children by providing just one $100 gift card per child.

The idea for the Guardian Angels program was prompted by Holtville firefighters’ visits to school campuses, where they would at times encounter students who were less fortunate than others.

“It melts your heart,” Silva said.

Next
GILGAR: No Moratorium on This COVID Eviction