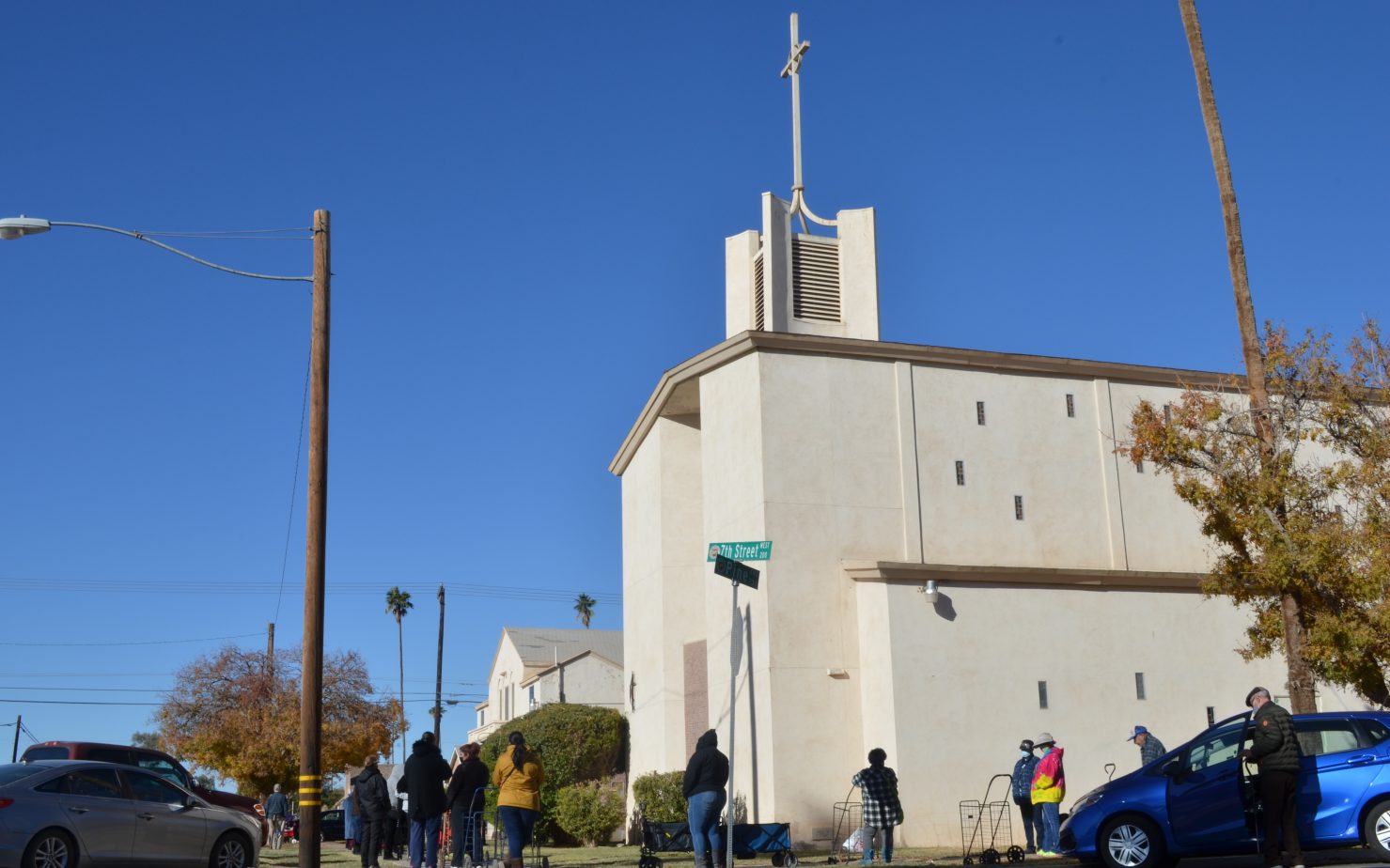 HOLTVILLE — For the past nine years, members of the United Methodist Church of Holtville and volunteers have been distributing donated food items to less-fortunate residents here.

On Saturday, Dec. 19, more than 300 residents filed in and out of the church’s fellowship hall to receive the food items, which were provided to the church through a partnership with the Imperial Valley Food Bank.

The number of residents seeking assistance has steadily climbed through the years, and notably appears to have increased on account of COVID-19, said Becky Miller, longtime church member and event coordinator.

Yet, the future of the humanitarian effort is uncertain now that the church is expected to close because of a local Superior Court judge’s ruling in a civil lawsuit that ordered the property to revert to the possession of the local congregation’s parent corporation, which sued over the congregation’s perceived inability to minister to Hispanic residents, among other things.

Currently, confidential settlement negotiations remain ongoing between the local church and its parent corporation, the South District Union of the California-Pacific Annual Conference of the United Methodist Church.

It is hoped some sort of agreement can be reached between parties that would allow the monthly food distribution event to continue to be hosted at the church’s grounds by event organizers, even if they are no longer formally associated with the Methodist Church, Miller said.

“If we were to lose the next rounds (of settlement negotiations), we would have to find another facility,” she said.

The lawsuit, filed April 9 by the parent corporation’s South District against the Holtville church and three board members, had sought a court order declaring the South District as the church’s rightful property owner, among other causes of action.

The South District had sought such a court order after initially failing to get local church officials to comply with the district’s recommended closure of the Holtville church in January for allegedly no longer serving “the purpose for which it was organized or incorporated,” the lawsuit stated.

The South District’s determination came after six years of assessments, meetings, correspondence, and appointment changes involving parties. Those discussions centered largely charges that the Holtville church did not minister to Hispanic residents.

“While Holtville is currently an 83 percent Hispanic community, the congregation does not reflect this community, and has resisted incorporating bilingual or Hispanic language ministries as well as criticized the bilingual nature and efforts of the current pastor,” the South District Superintendent Rev. John Farley wrote to local church officials on Jan. 10.

On Dec. 16, Imperial County Superior Court Judge Jeffrey B. Jones sided with the plaintiffs, declaring that the property in question belongs to the South District pursuant to the corporate contracts binding the local church to the rules and regulations of its parent corporation.

Jones’ ruling was limited to the cause of action that had sought to dismiss any claim the Holtville church contended it had on the property’s title and did not rule on three other causes of action, said Katie Turner, an attorney with El Centro-based Sutherland & Gerber, who represented the respondents.

The court further indicated its ruling was aligned with the broad powers that courts have granted churches in administering their own affairs according to their contractual obligations and articles of incorporation, Turner said.

The ruling also came as a setback for local church officials and members, who are now considering forming a separate nonprofit organization to be able to continue with their humanitarian efforts within the community.

“At this point they’re OK with that,” Turner said during a Friday, Dec. 18, interview. “Keeping some outreach at that location is important to every member of the current church.”

Prior to Jones’ ruling, respondents had argued that the church had been ministering to the city’s Hispanic population, and that the South District’s punitive actions failed to provide the local church with any due process, Turner said.

The current settlement negotiations are expected to take a considerable amount of time to conclude, allowing local church members some time to determine their next step.

Local church members are considering the possibility of purchasing the property once it becomes available on the market. The South District has indicated it is likely to liquidate its assets, which consists of the church grounds at 217 W. Seventh St., an adjacent house at 225 W. Seventh St. and a parsonage, or home for clergy members, at 663 Cedar Ave.

“They really have been a big part of Holtville for many years,” Turner said. “It’s been an important part of the community for years and years.”

Its current congregation has about 25 members, many of whom have been attending the church throughout their lives, said Becky Miller.

“There’s a lot of history,” she said.

See additional documents in the case below: