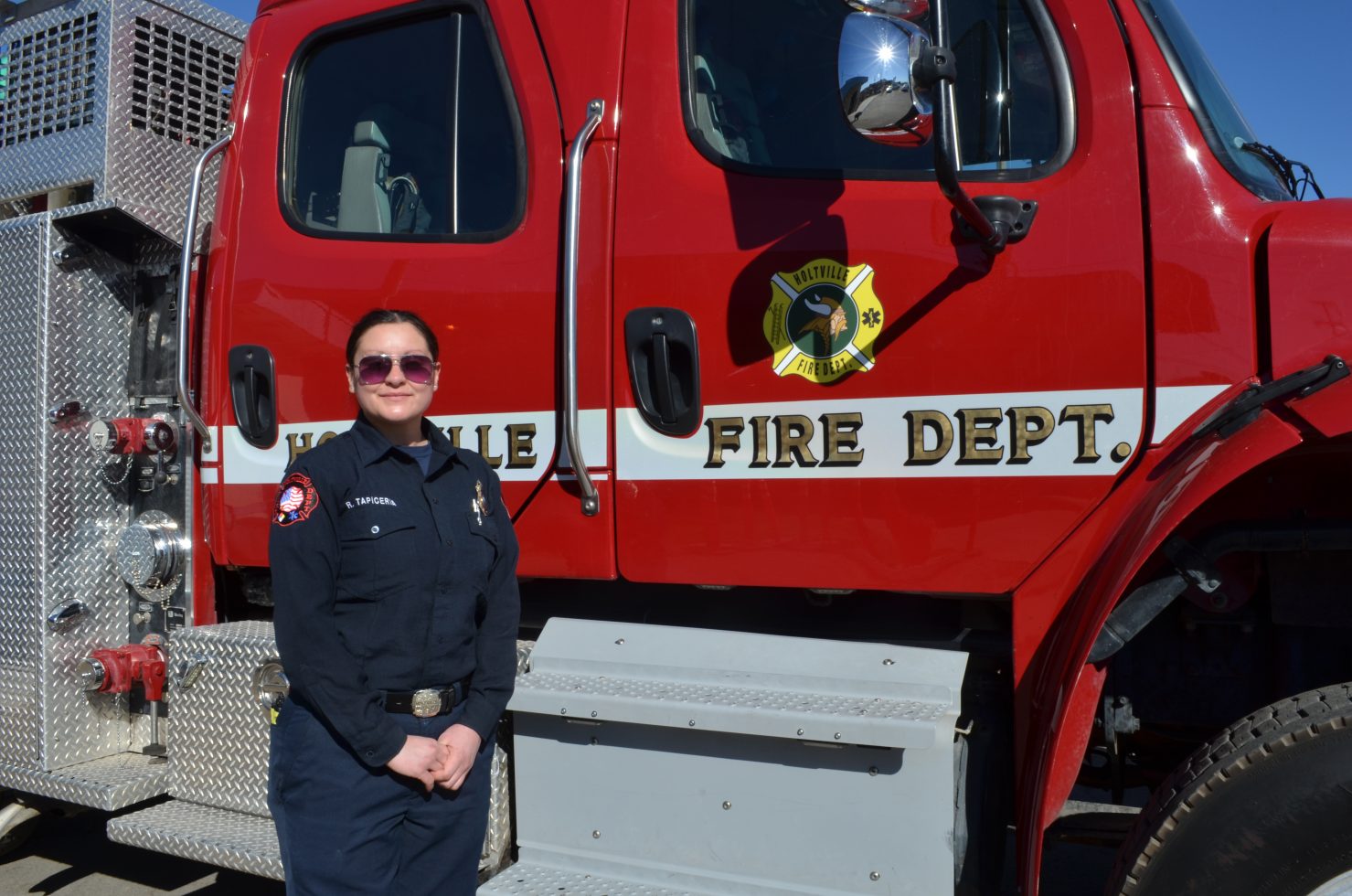 Female Holtville Firefighter Pushes to Have More Women in the Ranks

HOLTVILLE — For Raylene Tapiceria, her dreams of becoming a firefighter were stoked as a teenager while sitting with her grandparents on the porch of their Niland home.

It was from that vantage point that she would often look across the street and observe Niland Fire District firefighters performing daily equipment and apparatus checks, as well as physical training.

“I told myself I want to do that one day,” said Tapiceria, who today is a Holtville Fire Department reserve firefighter.

These days she is one of just a handful of women serving as firefighters in the Valley. Elsewhere across the county, women firefighters can be found employed on a part-time and full-time basis with the Imperial County, Brawley, and Westmorland departments.

The 33-year-old has also taken a direct role promoting such a potential career for women through the Holtville department’s community outreach efforts and Explorers program.

“It really is an intimidating job, but I try so much to encourage them to come volunteer to see if it would be a career they would like,” Tapiceria said.

Part of that encouragement includes advising the young girls about the physical and mental demands of the profession, as well as the type of discipline and drive needed to thrive.

For starters, the young women are encouraged to shed any shyness they might have and not be afraid of being outspoken and assertive “go-getters.”

Though Tapiceria admits she was something of a shy person during her formative years, those vestigial attributes have since been replaced with a confidence and self-assurance that makes her a motivated team member.

“In this career path, you can’t be like that,” Tapiceria said, referring to timidity.

In her own case, Tapiceria was helped along the way by the Niland firefighters whose station was near her grandparents’ house and who provided feedback when she was enrolled in fire academy classes at Imperial Valley College.

At the same time, she had to repeatedly ignore the remarks of family and friends who doubted such a potentially dangerous career was in her best interest.

“They thought I was crazy,” the eldest of five siblings said. “But I’m here today.”

The Niland native had initially gotten her start in early 2016 as a volunteer with the Calipatria Fire Department, where she was then hired on a part-time basis and remained for about three years.

She eventually ended up at the Holtville Fire Department, whose Chief Alex Silva had initially come to know Tapiceria and become impressed by her work ethic during a local strike team deployment to Northern California in 2016.

“She held her own against any other man,” Silva said.

Tapiceria said she has been part of about 10 strike team deployments while serving as a firefighter with local agencies. The deployments have provided advanced training and experiences that are hard to come by otherwise.

Yet, the prolonged absences of up to 14 days have proven taxing on Tapiceria’s 10-year-old son, who she said worries for her safety during such occasions and will call or send texts daily.

“Sometimes we don’t get reception out there, so he stresses,” she said.

Tapiceria has also found that she has had to reckon with the emotional toll of the tragic incidents that firefighters often respond to. They are more of a challenge to adjust to than any of the profession’s physical demands.

Aside from responding to calls for emergency services as a reserve firefighter, Tapiceria also is employed on a part-time basis as the department’s fire prevention officer. In that role she will patrol the city’s streets in search of any potential residential fire hazards and work with residents to remove debris from yards to comply with city ordinances aimed at eliminating such potential fire hazards.

Similarly, she will do annual inspections of businesses to ensure they, too, comply with fire and safety standards.

“I’m really blessed and I’m really grateful,” Tapiceria said, “because I love my job and I love what I do.”

Next
2020 Brings Confusion to All Walks of Life