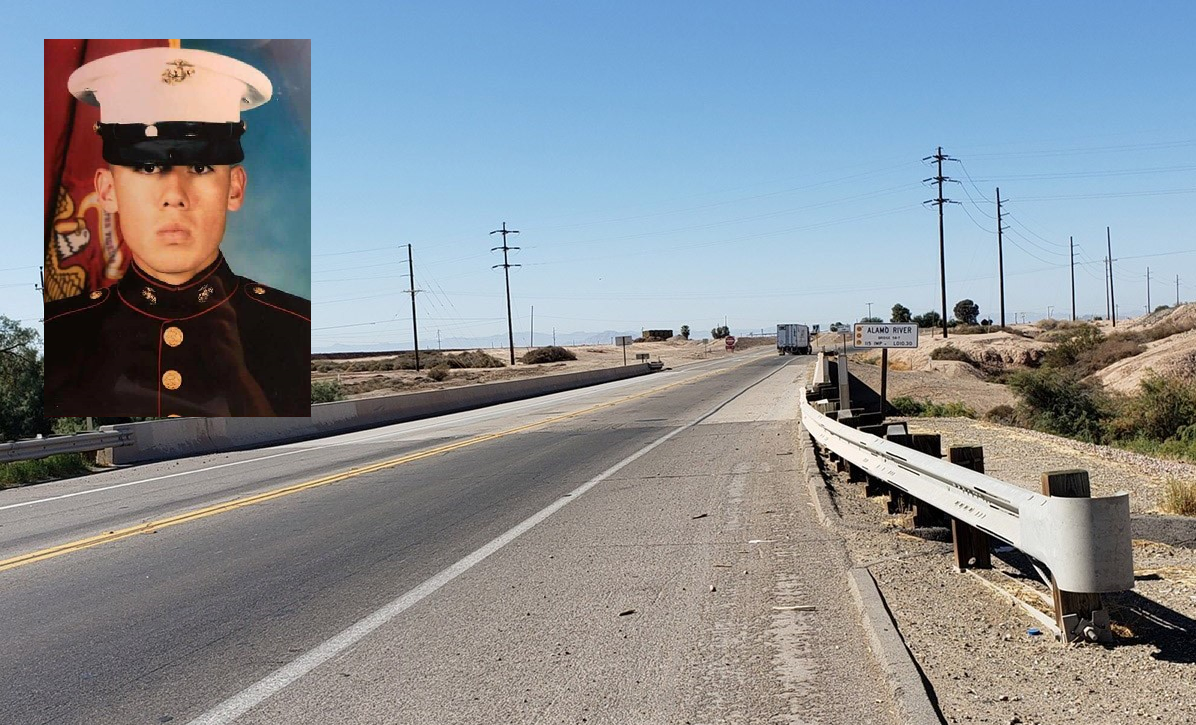 State legislation has named this bridge on State Route 115 just west of Holtville in memory of U.S. Marine Cpl. Erik Silva (inset image), who was killed during Operation Iraqi Freedom on April 3, 2003. Efforts to pay for a sign for the bridge recently paid off after the Imperial Irrigation District on Dec. 1 awarded a $15,000 grant to pay for the signage and other veterans’-related efforts. | FILE PHOTO ILLUSTRATION
Home
Featured Stories
In Featured StoriesLocal News

HOLTVILLE — A years-long effort to rename the Alamo River Bridge in honor of Marine Cpl. Erik H. Silva was given a much-welcome boost by a recent $15,000 grant from the Imperial Irrigation District.

The grant award will supplement the funds that had previously been raised by the American Legion auxiliary Bradley-Keffer Unit 138 to help purchase the commemorative signage.

Silva was a 1998 graduate of Holtville High who was about six months short of completing his first enlistment when he was killed on April 3, 2003, when his platoon was ambushed in Iraq.

“I’m very appreciative and grateful for the IID and the women from the auxiliary,” said Isaac Silva, Erik’s older brother. “There isn’t enough words.”

With the funds secure, supporters of the effort are now expressing hope that the COVID-19 pandemic will diminish enough to allow for a commemorative ceremony to take place on April 3 at the Alamo River Bridge on State Route 115.

The date of the anticipated ceremony would coincide with the anniversary of Erik Silva’s death. Some members of his platoon are expected to be in attendance during the ceremony and speak on Silva’s behalf, Isaac Silva said on Tuesday, Dec. 8.

At least one and sometimes up to 11 platoon members have visited Erik Silva’s gravesite at Terrace Park Cemetery in Holtville and met with Erik’s family on or around that date on an annual basis.

“They share a lot of stories about Erik and his endeavors out there. Some are rated PG and other are not,” Isaac said with a laugh. “They pay their respects.”

His younger brother was mortally wounded while providing cover fire for his platoon during an Operation Iraqi Freedom combat operation, according to the website of the Mt. Soledad National Veterans Memorial, where a plaque is on display in his honor.

Erik Silva was 22 years old at the time of his death and was assigned to the 3rd Battalion, 5th Marines, 1st Marine Division, at Camp Pendleton.

Both his immediate and extended family include a number of veterans, including Isaac, who served a total of 12 years in the United States Air Force and the California Army National Guard, and his older sister, Gloria Silva, who served 10 years in the U.S. Navy.

Silva’s family had initially been approached with the idea to commemorate his passing by former local auxiliary president Kim Vincent and Holtville Fire Chief Alex Silva.

“They were honored to have Erik’s name remembered and put somewhere people can drive by and keep him in their thoughts,” Chief Silva said on Dec. 8.

A longtime friend of the family, Chief Silva said he saw Erik Silva grow up as a child, then enlist in the Marine Corps with the hopes of one day pursuing a law enforcement career.

Erik was known as a quiet, friendly individual who played the trumpet in the Holtville High band, was a member of the varsity golf team, a soccer player, and a drum major his last two years of high school.

“I always felt we should honor him and keep his memory alive somehow,” Chief Silva said.

The news of the IID’s grant was a welcome development, considering that fundraising efforts had to be cut short on account of the pandemic, Chief Silva said. The grant also lessened the burden that family and supporters of the memorial bridge had felt to come up with the necessary funds for the signage.

As part of the effort to rename the Alamo River Bridge in Erik Silva’s honor, organizers had enlisted the help of Assembly member Eduardo Garcia, D-Coachella, who sponsored an Assembly resolution that was passed in July 2019 and which authorized the state Department of Transportation to erect the commemorative signage once funding was secured from nonstate sources.

Through a GoFundMe account and a separate bank account, Vincent was able to raise about $3,200 toward the effort since February, but ultimately fell short of the $6,800 goal.

A supporter of the auxiliary suggested it seek out a grant from IID. The subsequent proposal was championed by Director Norma Sierra Galindo, a Holtville resident and spouse of a veteran. The IID board unanimously approved the grant award on Dec. 1.

“This is a pretty warm and fuzzy thing,” Galindo said Dec. 8.

Though the auxiliary wasn’t initially sure of the ultimate amount that it was to receive, the $15,000 award will now not only cover the cost of the memorial bridge’s signage but further fund the auxiliary’s efforts on behalf of local veterans.

“We’re very blessed to be able to have the opportunity to help more people,” Vincent said.

Although she didn’t know Erik Silva, who Vincent said is the first armed service member from the Valley to be killed in action in the Iraq war, his name came up repeatedly during interactions she had with the public while she was a member and president of the auxiliary.

“It’s bittersweet to bring this home in Erik’s honor,” said Vincent, who now lives in Oklahoma. “He’ll always be a part of our community.”

Should COVID-related restrictions lessen, and the April 3 memorial ceremony be permitted to take place, it is hoped personnel from Naval Air Facility El Centro will be able to participate as well, said Kris Haugh, NAFEC public affairs officer.

Aside from the bridge dedication in Erik Silva’s honor, Vincent said she is in the preliminary stages of establishing a committee of Valley stakeholders and veterans’ groups to attempt to have other portions of local highways named in honor of local service members who have died in different theaters of combat.

“I think it’s important that we always acknowledge our veterans who gave all and those who continue to serve,” she said.