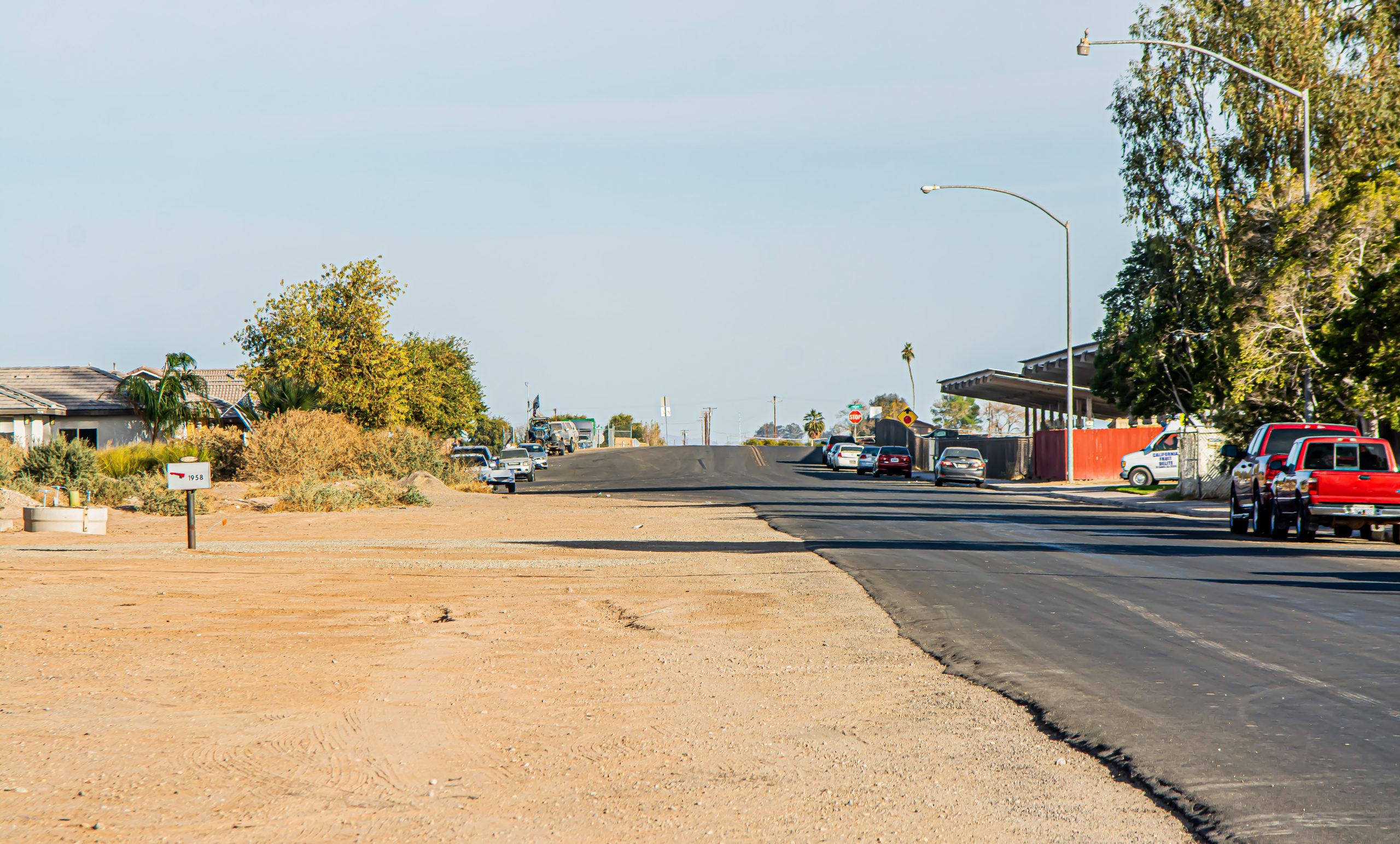 The north side of Ninth Street between Ash and Beale avenues in Holtville is shown on Tuesday, Jan. 13. The Holtville City Council on Monday, Jan. 11, awarded more than $388,000 in contracts tied to the pending installation of curbs and gutters on the bare stretch. | CAMILO GARCIA JR. PHOTO
Home
Local News
In Local News

HOLTVILLE — The Holtville City Council unanimously approved a pair of resolutions related to planned sidewalk improvements for the north side of Ninth Street between Ash and Beale avenues during its Monday, Jan. 11, meeting.

The approved resolutions will award a $311,909 construction contract to El Centro-based Rove Engineering, while a resident engineering and construction management contract worth $76,329 will go to Dynamic Consulting Engineers Inc. of Imperial.

The resolutions’ combined expenditures of $388,238 slightly exceeds the $374,000 that was allocated for the project through a combination of state and local funds.

The $311,909 awarded to Rove Engineering represented the project’s lowest responsive bidder and came under the $325,300 allocated for constructions costs.

However, the $76,329 construction management contract going to Dynamic Consulting was about $13,239 above the available allocated funds for the sidewalk improvement project.

“Monies between construction and construction management will need to be shifted, but the project is slightly over budget,” a staff report accompanying the agenda items stated. “The shortfall can be covered by Local Transportation Agency (LTA) funds.”

The project’s costs are funded by a $331,000 grant from the Congestion Mitigation and Air Quality program, which is administered by the state Department of Transportation, District 11.

An additional $43,000 in matching funds for the project have been secured from the city’s LTA fund.

The proposed project will still leave a segment of Ninth Street without a sidewalk on its north side between Ash and Oak avenues. Contract city planner Jeorge Galvan told the council that additional CMAQ grant funds could be sought to complete the stretch.

The project will also leave a segment of the north side of Ninth Street without a sidewalk between Ash and Oak avenues. Galvan had told the council during its Oct. 26 regular meeting that additional CMAQ grant funds could be sought during its next cycle of funding to finish the work.

During the Jan. 11 meeting, the City Council also approved a revised salary schedule for predetermined pay-rate changes and to reflect required changes to the California minimum wage.

Some of those pay-rate changes included an automatic 2 percent raise for members of the city’s Management/Supervisory Employees and Classified Employees bargaining units, the agenda item’s staff report stated.

That pay raise had been previously approved in June 2019 as part of the memoranda of understanding between the city and the bargaining units.

The only employees identified as being impacted by the adjustment to the state’s minimum-wage rate increase from $13 to $14 per hour starting Jan. 1 are part-time firefighters.

“Expenditures will be impacted in Fire, however, the projected changes were incorporated in the Fiscal Year 2020-21 Budget,” the agenda report stated.

Next
GILGAR: ‘The Child’ Was a Pop Culture Bright Spot in a Bleak 2020