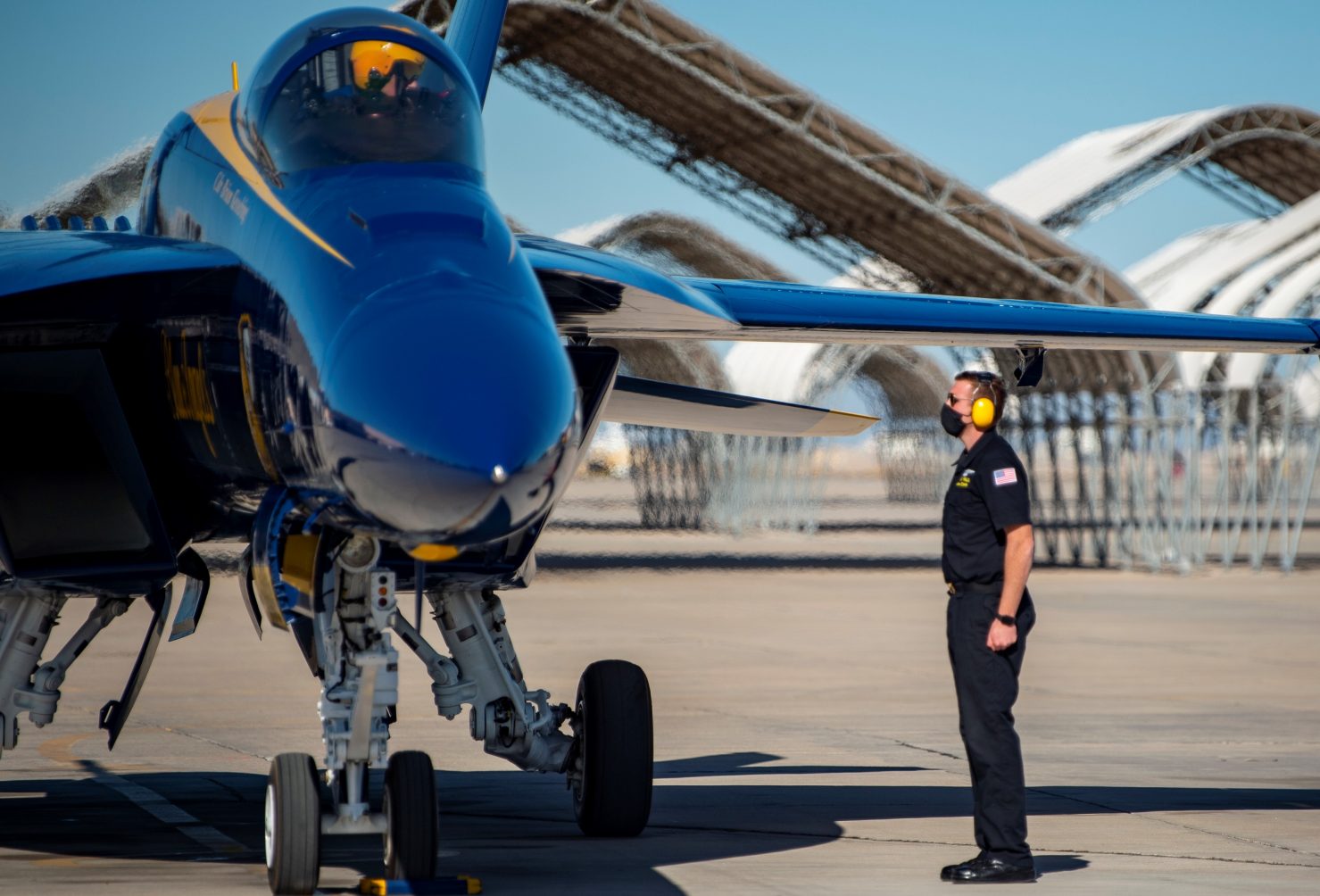 Blues’ ‘Louder, Bigger’ Rides to Run Through Their Paces in Valley, Says Cmdr.

Even as the Blue Angels hone their skills over Imperial Valley airspace leading up to their 75th anniversary season, what locals will see during daily practices could be a spectacle unto itself.

Much has been made about the elite flight demonstration team’s recent transition to a new platform, the Boeing-built F/A-18E/F Super Hornet, the first change for team’s platform, or model of jet, since 1986.

With that change comes a larger, louder, more powerful, and more maneuverable version of the telltale blue and gold aircraft that the team is still getting to know, and it should make for a memorable visual experience as it dives and dances overhead, which it already began Jan. 7.

“It’s going to be a little bit louder, and bigger and easier to see,” said team commander, flight leader, and pilot of the No. 1 jet, Cmdr. Brian C. Kesselring.

In addition to the new platform being about 33 percent larger than the previous F/A-18 Hornet, the F/A-18E/F Super Hornet is expected to make an already safe show safer by providing a modernized platform, Kesselring said during a Jan. 6 interview.

The Blue Angels will first practice basic maneuvers and power adjustments before moving on to the more advanced exercises and formations.

“We’re going to figure it out here in El Centro,” Kesselring said.

And to due the ongoing pandemic, the team, as well as Naval Air Facility El Centro, will be figuring out just how to present the Blue Angels to the community as it retools its Festival of Flight event scheduled for March 13. The Festival of Flight will more prominently celebrate the relationship the base has with the Valley but in the absence of a crowd.

Aside from what are significant changes — the Blues’ popular transport plane Fat Albert has also adopted a new platform in the C-130J Super Hercules — other aspects of the Blue Angels’ annual sojourn in the Valley remain comfortably the same, Kesselring said.

“El Centro is actually where we spend most of our time,” he explained. “It really is a coming home for us.”

As a result of COVID-19, the inaugural Festival of Flight scheduled for March 13 will not accommodate a public gathering at the Navy air facility, officials said.

Instead, Navy officials are hoping its past successes with filming aircraft flight maneuvers will help it present virtual flight performances for the 2021 season, Kesselring said.

This year marks the team’s 75th anniversary. Based in Pensacola, Fla., the Blue Angels have called El Centro their winter training home since 1967.

Their connection to the Valley is credited to then-Mayor Dubois McGee lobbying the Navy and the team to shift the flight team’s operations here during the Valley’s cooler months.

The Festival of Flight will be a virtual event with many live military flight demonstration team performances, NAF El Centro reported.

“The installation is working hard to create an event that is accessible to the public, while managing the potential impact of the COVID-19 pandemic on our installation and to our fleet squadrons who train and operate from here,” stated Capt. William Perkins, NAF El Centro’s commanding officer, in a Jan. 6 press release.

“We have already begun conversations with many local agencies and governments in order to bring a meaningful event to our community.”

The mission of the Blue Angels is to showcase the pride and professionalism of the U.S. Navy and Marine Corps. Its flight demonstrations and community outreach are meant to inspire a culture of excellence and service to country.

Locally, the demonstration flight team’s annual arrival and training is a welcome tradition that adds to the quality of life in the Valley, stated Tony Rouhotas Jr., county chief executive officer, in a written statement.

The Blue Angels’ extended presence is also more of a welcome addition during these unprecedented times of the COVID-19 pandemic, he said.

“It’s encouraging that we are still going to be afforded the opportunity to exhibit pride to our high-flying acrobatic military partners while paying tribute to the community that has embraced them for so many years,” Rouhotas stated.

For more information about the Blue Angels, visit www.blueangels.navy.mil

Next
Diamond Divas Happy to Get on the Field