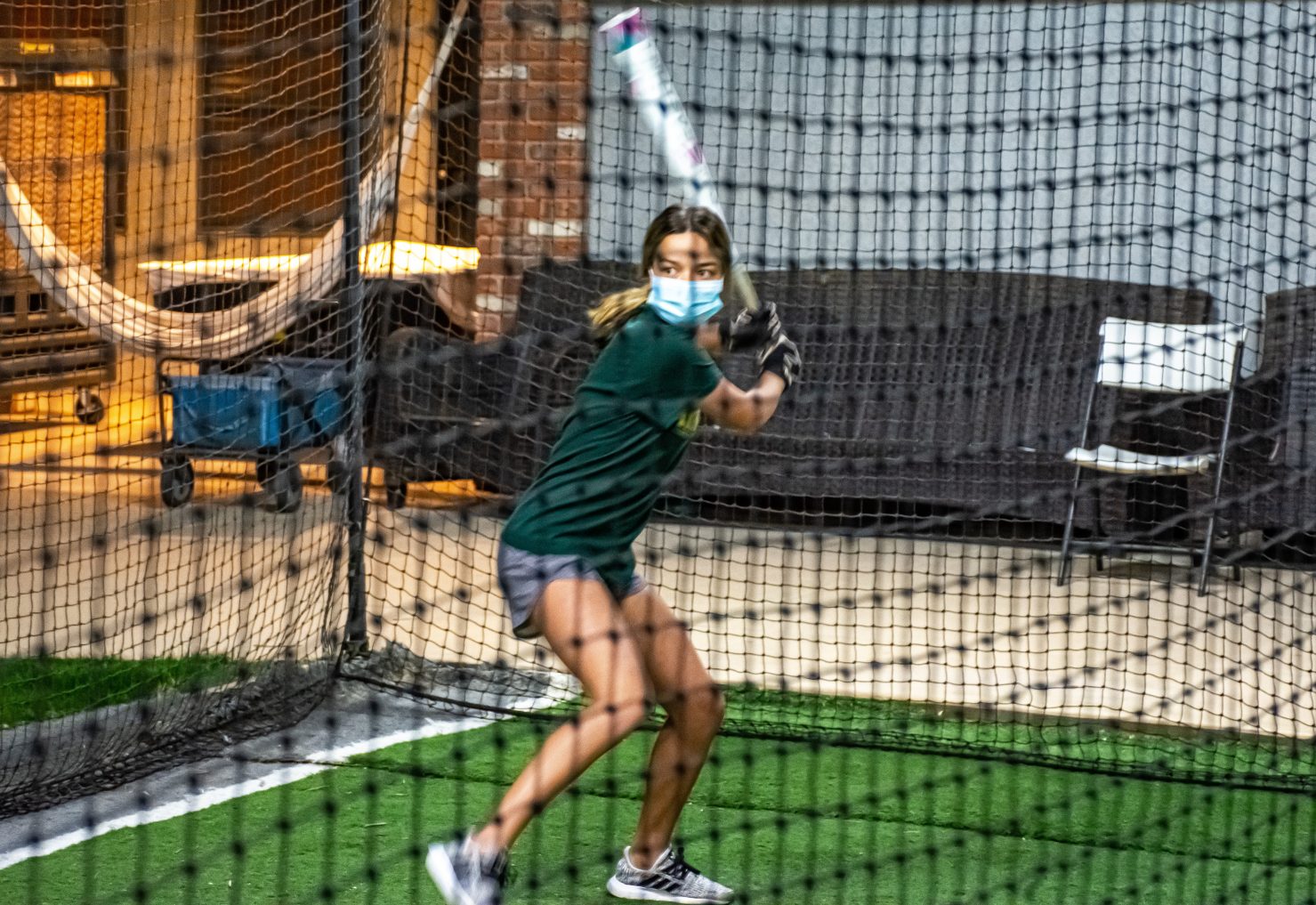 Holtville High School sophomore Kalli Strahm, a member of the travel softball team the Diamond Divas, takes a swing in a private batting cage in El Centro on Jan. 7. The 15-year-old Strahm had organized high school sports taken away from her due to the pandemic but has found life on the field as part of a travel team that goes where games are allowed. | CAMILO GARCIA JR. PHOTO
Home
COVID-19
In COVID-19Featured StoriesSports

Diamond Divas Happy to Get on the Field

When Imperial County schools went to at-home learning in March, all the sporting equipment got put away as well.

While most of the students thought they’d be back on campus and the athletic fields in a few weeks, COVID-19 has forced the school shutdowns to drag on into 2021, now 11 months later.

March 2020 was the beginning of local high school spring sports, meaning the bats, balls, and gloves of baseball and softball were just starting to get used. Most local high school softball teams had played fewer than 10 games when everything stopped.

“Softball is the sport I’ve played the longest and it was the sport I was most looking forward to,” said Kalli Strahm, a Holtville High School sophomore, who was on the Vikings’ varsity squad in her freshman campaign. “I knew all the hard work I’d put in playing softball was going to make it worth it when I got to high school and we only played eight games.”

Like all young athletes, Strahm was upset sports and on-campus school was taken away by COVID-19, but she assumed she’d be back on campus and playing sports soon enough.

“We kind of thought that we’d be back on campus when the new school year came around, but when that didn’t happen there was the thought, I could lose a second season, and that’s just insane,” said the 15-year-old Strahm.

Strahm had been playing in local recreational leagues with the Diamond Divas for the past few years for coach Mike Gastelum. When summer rolled around and the girls were all still sitting idle with no sports, he decided to transform his team into a travel team and find games wherever it was allowed.

“We wanted to get the girls a different perspective of softball and see what else was out there,” said Gastelum, who has been a head softball coach for about five years. “2020 was definitely the toughest year I’ve ever faced as a coach. Basically, when everything shut down, we decided to meet with the parents and see what we could do.”

With their support, Gastelum set out to see what could be accomplished as far as practice, conditioning, hitting sessions, and games. His creativity has brought together a collection of girls from Holtville, Calexico, El Centro, and Brawley that has been able to keep competing through the pandemic.

Gastelum conditions with the girls on a practice field in Calexico with the support of the city. He uses a parent’s home batting cage to work with the girls in a one-on-one setting, and they travel to counties where games are permitted.

“We are just trying to keep the girls active. Here in the Valley, and in a lot of Southern California, there is nothing as far as games go, so we’ve had to travel to Arizona a lot,” Gastelum said.

The Diamond Divas, all ages 16 and younger, feature high school sophomores, freshmen, and a few eighth-graders. One of the freshmen on the squad is Calexico’s Gianna Galindo, who plays both third and first base. She’s hoping she gets to start her high school career this year but has enjoyed the travel with the Divas.

“It’s been a lot of fun. We get to see a lot of new places,” said the 14-year-old Galindo. “Traveling so much you get to see different types of teams, and it’s been a really good experience for all of us.”

Galindo is worried she might not get to take the softball field as a Calexico Bulldog this year and play the sport she’s loved since age 7.

“I’m not sure there is even going to be a high school season,” Galindo said. “This is the first sport my parents introduced me to, and I fell in love with how fast it is and how you feel the intense pressure with every pitch.”

Gastelum and the Divas are taking every COVID precaution at games, as players and parents wait in their cars until five minutes prior to games, players are masked while in the dugout, and parents are not allowed in the bleachers and must sit along the outfield, spaced apart among family cohorts.

“So far, we have not had a girl test positive for COVID,” Gastelum said. “Thanks to the great support from the parents, we’ve been able to find games and keep the girls going.”