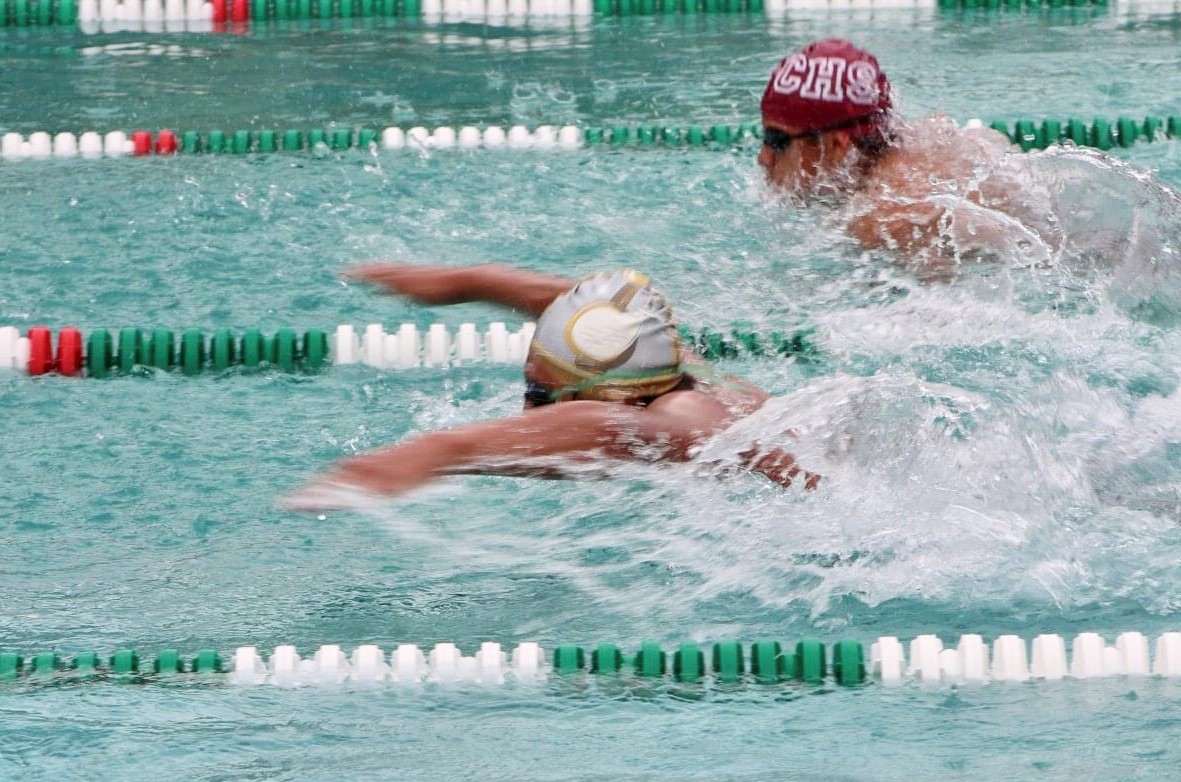 Swimmers for Holtville High School (left) and Calexico High School compete during a meet from a previous season. Swimming and cross country will be among the first sports allowed to resume in early February now that the state's stay-at-home order has been lifted. | COURTESY PHOTO
Home
Featured Stories
In Featured StoriesSports

It’s game on for high school athletes in the Imperial Valley in the next couple of weeks, at least on a low-contact, limited basis.

Based on the California Department of Public Health guidelines issued in December, outdoor, low-contact sports can begin while Imperial County is in the COVID Purple Tier (widespread/most high-risk). As counties improve their COVID numbers and move up in tiers, other sports will be allowed to begin practice and competition.

For local high schools, Purple Tier sports that will be beginning on Monday are cross country and swimming, which also fall into the CIF-San Diego Section’s Season 1. Plans are being made at local schools to get those sports under way, but with an extreme abundance of caution.

“We will be starting our athletic programs in the next couple weeks, it’s just a matter of ironing out some of the safety protocols before we have a definite start date,” said C.J. Johnston, Holtville High School’s athletic director and vice principal. “With the order lifted, we can begin practicing with the most low-risk sports, which for us is cross country and swimming.”

“With the new guidelines in place we will begin to inform all interested students and parents of the criteria that will need to be followed to participate in safe conditioning practices and potential contests,” Velez said via a release from Calexico Unified School District. “We are working with students to make sure they are eligible to participate in sports and that they have completed all the necessary requirements to be cleared to play.”

Meanwhile, according to CIF-SDS, start dates for the most low-risk sports are Monday, Feb. 1, for cross country and swimming, followed by Feb. 8 for girls’ golf and Feb. 15 for boys’ golf, track and field, and boys’, girls’, and co-ed tennis. While those are the proposed dates, each school district will set its own official date for students to begin practice and competition.

“We have worked with the Central Union High School District to make sure we have all the protocols in place, and we are planning for cross country and swim to start on Monday,” said Ruben Valenzuela, Southwest High athletic director.

At Vincent Memorial Catholic High School in Calexico, Athletic Director Jesus Gonzalez is in a different situation as his school doesn’t field cross country or swim teams, but the Scots are constantly an Imperial Valley and CIF-SDS power in boys’ and girls’ tennis, which can begin practice on Feb. 15.

“It’s going to be interesting this year, because for the first time, the boys’ and girls’ tennis seasons run at the same time and they’ve added co-ed tennis, so we will have mixed doubles teams,” Gonzalez said. “Right now, we are finding out who is interested in playing and who is available. I think we have some tennis players who could be moving on to play in college.”

Johnston said Holtville will have a swim team even though the city’s Gene Layton Memorial Pool is currently in disrepair and out of service. Holtville High has reached an agreement to use the new El Centro Aquatic Center for practices and meets.

Imperial High School will be opening its swim and cross-country seasons on Monday but scheduling competitions remains up in the air.

“We will be starting swim and cross-country practices on Monday, but we still have to get together with the other Imperial Valley schools and work on the scheduling of meets,” said Bryan Thomason, Imperial Unified School District superintendent. “CIF has given us guidance for proper COVID protocols to follow for practices and competitions and we are relaying those to our coaches and athletes.”

Gerardo Lara has been coaching sports at Holtville High School since the late 1970s and has spent the last 25 years as the school’s cross country and track and field head coach. With 40-plus years of coaching under his belt, he said this year will undoubtedly be the strangest.

“I am cautiously excited to get back out there,” Lara said about resuming his two sports within the next three weeks. “It’s going to be a little bit unusual this season. I’ve been having to rethink our routines and our entire training regime.”

Normally the cross-country season runs in the fall, with track and field occurring in the spring. Now, with the two seasons almost running concurrently, Lara said he’ll be extremely busy, but he’s happy the students will get a chance to compete.

“We’ve got some great seniors, and I’m happy they will get an opportunity to compete,” Lara said about his upperclassmen, including senior distance runner Alan Jimenez.

Jimenez had his junior track season taken away by COVID and thought he was going to miss his entire senior year of competition.

“I was expecting the worst. I didn’t think we’d get any sports or competitions this year,” the 17-year-old Jimenez said. “So, I was pretty excited when I heard that we were going to start. I’ve been training during the entire quarantine and now I feel like it all has a purpose.”

Lara thinks Jimenez could have been a top-10 state finisher for his division this year in a “regular” cross country season. The abbreviated season won’t have any section or state championships, but that’s fine with Jimenez as long as he gets a chance to run and show times that might draw interested colleges.

Season 1 Sports on the Shelf

CIF-SDS originally planned for its Season 1 to include football, girls’ volleyball, cross country, and competitive cheer. Once the county reaches the point in which the sport is within one tier level of the assigned sport, practices can commence.

Football and girls’ volleyball fall in Tier 3 (Orange) and could begin practice once the county moves from the Purple Tier to the Red Tier. However, CIF-SDS has mandated that Season 1 sports be concluded by April 17, meaning that for any competitions to occur, Imperial County would have to reach the Orange Tier, which is a full two levels above where the Valley sits today.

Red Tier (Tier 2) sports, baseball and softball, have a start date of March 13. As of now, practices in these sports can begin while the county is in the Purple Tier and competitions can start once the county reaches the Red Tier.

“We want to get the athletes out there practicing as soon as we can as long as it’s deemed safe to do so,” Johnston said. “Once we get them out there, we’ll put together the other logistics and safety protocols like hosting a competition and safe travel protocols to other venues.”

An assumption that these early sports would see increased participation due to students being stuck at home for almost a year don’t seem to be panning out. Both Johnston and Lara said the early interest in the sports is about the same level as previous years.

“We did a survey among the students as to which sports they were interested in, and honestly, we got about the same numbers we get every year,” Johnston said. “We didn’t get the survey turned in by every student, but those who did showed about the same interest.”