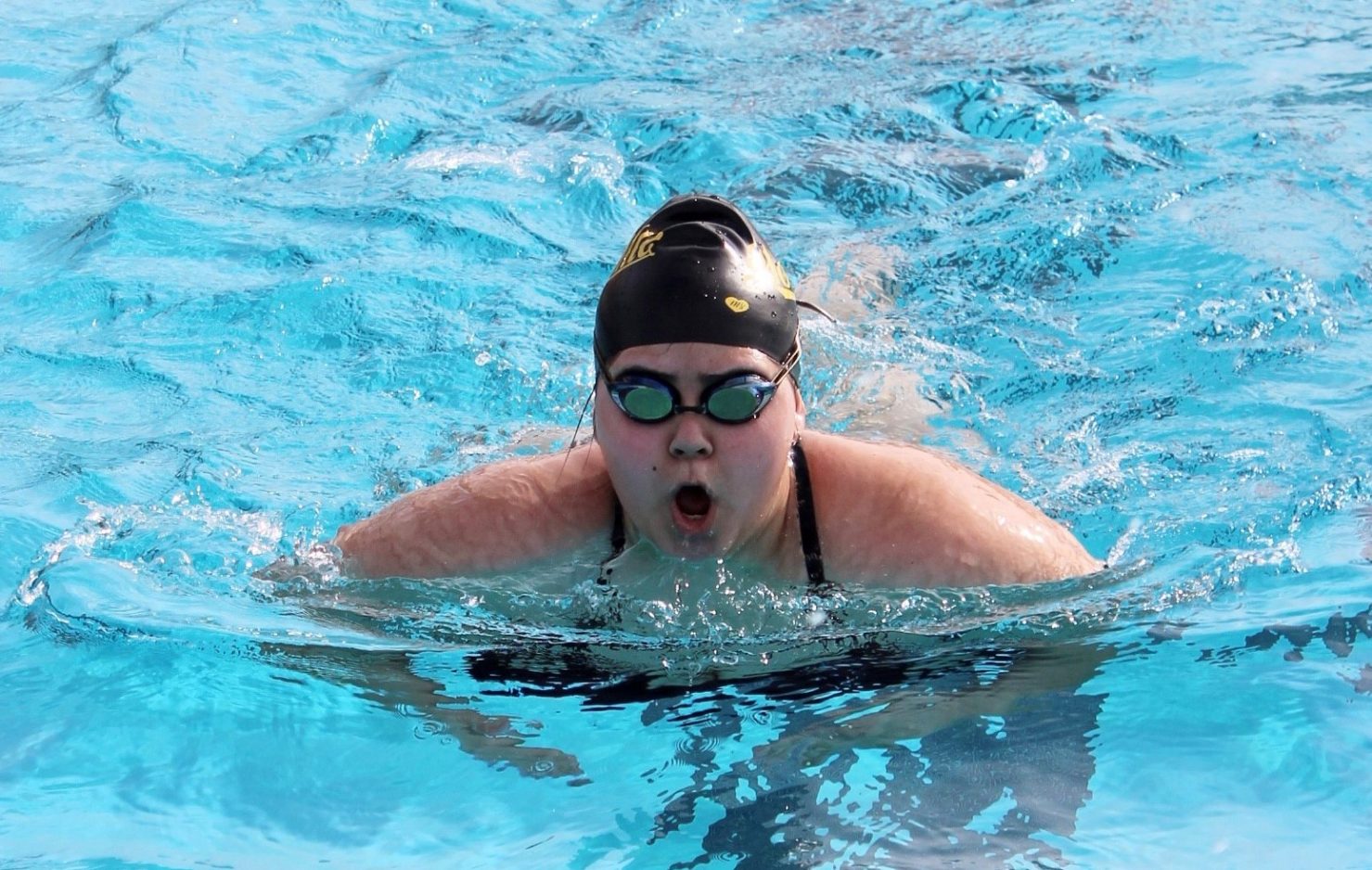 Holtville High junior Bella Burns takes a warm-up lap during swim practice for the Vikings at the El Centro Aquatic Center on Wednesday, Feb. 3. After interscholastic sports were cut short in early spring 2020 due to the COVID-19 pandemic, local high school athletes have returned to the practice fields, tracks, and pools in preparation for competitive play. | CATHI PHILLIPS LARIOS PHOTO
Home
Featured Stories
In Featured StoriesSports

For the first time in almost a year, students made their way onto high school campuses throughout the Imperial Valley on Monday, Feb. 1, as practices got underway for cross country and swim teams.

The two non-contact sports are allowed to practice and compete while the Imperial Valley sits in the COVID Purple Tier (widespread/most high-risk). Other sports beginning soon at area high schools include girls’ golf on Monday, Feb. 8, and boys’ golf, track and field, and boys’ and girls’ tennis on Feb. 15.

Even though a lot of the kinks were still getting worked out this week, students were happy a bit of “normalcy” was returning to their lives.

“You could see it on their faces, the kids are pretty excited to be back doing something,” Holtville High Athletic Director and Vice Principal C.J. Johnston said. “They got to come together as a team and see their friends. It was a little bit of what they were used to before COVID.”

At Calexico High School, the same enthusiasm was felt by the returning Bulldogs, who were anxious to run and get in the pool.

“There definitely was the excitement that comes with the renewed opportunity for sports to take place on our campuses,” Calexico High Athletic Director Mariano Velez III said. “Informational sessions were held with students and parents to address any questions about safety protocols and how practice/contests would be carried out.”

While there were bits of “normal” returning to the athletes’ lives, reminders of the pandemic were everywhere as both Calexico and Holtville athletes are required to fill out a daily COVID questionnaire, have their temperature checked as they arrive on campus for practice, and follow all the athlete protocols and new guidelines in place to prevent a possible COVID outbreak.

“On Monday, we went over all the new protocols that are in place now,” Johnston said. “We let them know that if they follow the protocols, we have a much better chance of getting through the entire season. If they don’t abide by the new guidelines, it can all go away very quickly.”

Calexico is using much the same protocols and making sure every athlete and family knows that safety comes first at practices and events.

“We will be going over all precautions at the beginning of every practice and event,” Velez said. “A letter was sent to our community via the CUSD Constant Contact newsletter on Jan. 29 regarding the types of precautions that will be implemented.”

At Holtville, several athletes are still trying to get all their paperwork filled out and get their physicals completed that will allow them to take part in their sport of choice. The number of athletes hasn’t been as high as expected for the cross country or swim teams in the first few days.

Gerardo Lara, who has coached cross country at Holtville for the last 25 years, said while the numbers were smaller than expected, the enthusiasm was sky high.

“The 12 we’ve had out there training the first few days are all very happy and excited to be part of the effort being made by everyone to have a cross-country season,” Lara said.

About 20 swimmers showed up to the Feb. 1 Zoom meeting with Johnston and coach Christina Croak, and half of those had their paperwork and physicals completed and were ready to jump in the pool on Tuesday, Feb. 2.

“It was a pretty good start for the swim program,” Johnston said. “The kids love swimming at the new (El Centro) Aquatics Center with the heated pool. At that first practice you could see they were having a fun time.”

As for when competitions will start, remains up in the air. Valley athletic directors are in discussions as to scheduling meets for both sports. It is expected cross country will begin within two to three weeks, while the first swimming competition will likely be in early March.

Red Tier (Tier 2) sports, baseball and softball, have a start date of March 13. As of now, practices in these sports would be allowed while the county is in the Purple Tier and competitions can start once the county reaches the Red Tier.