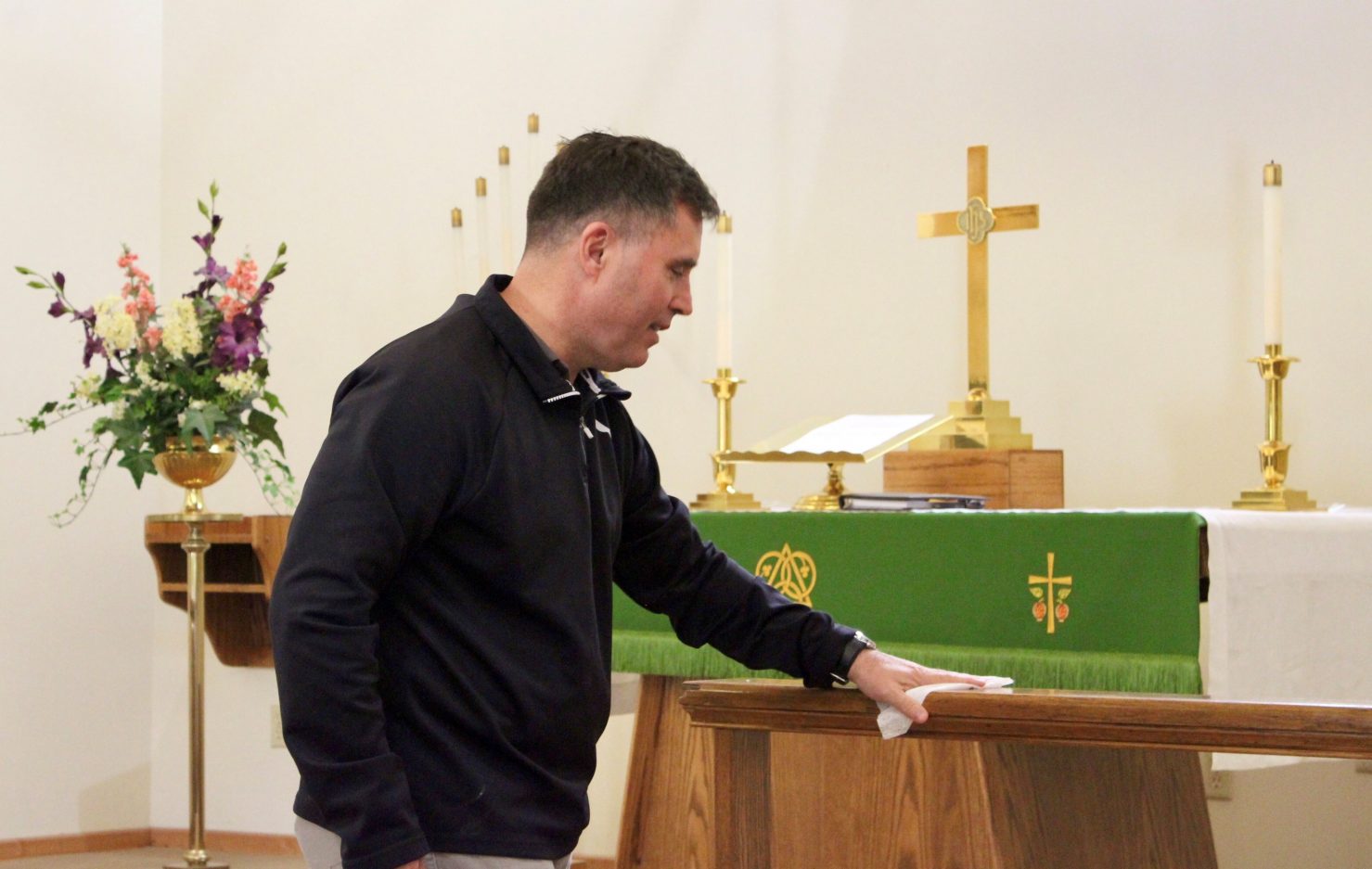 Pastor Mike Beyer from St. Paul’s Lutheran Church in Holtville cleans up at the church on Tuesday, Feb. 9. On Sunday, Feb. 7, indoor services resumed for many churches in the state in the Purple Tier, although attendance was restricted to 25 percent capacity. | CATHI PHILLIPS LARIOS PHOTO
Home
COVID-19
In COVID-19Featured StoriesLocal NewsRegional News

HOLTVILLE — The “welcome” mats are back out at churches throughout California, kinda.

“Our congregation was excited to be able to worship at church again. People were in very high spirits on Sunday,” said Pastor Mike Beyer from St. Paul’s Lutheran Church in Holtville. “Everyone was happy to be back, but we are still recognizing the pandemic and respectful of what the experts and science is telling us.”

Beyer, who has been at St. Paul’s since 2015, said there were about 50 members who showed up for the indoor service on Sunday, Feb. 7, with capacity at the small church around 300 congregants.

“We still had several people who stayed home and enjoyed the service via our live stream,” Beyer said. “We will continue to do our Zoom and outdoor gatherings for education and studies like we have been doing since the stay-at-home order was issued.”

The U.S. Supreme Court ruled on Friday, Feb. 5, that religious services could resume indoors with modifications to help reduce the spread of COVID-19. In the case of South Bay United Pentecostal Church, et al. v Newsom et al., the court partially granted the application for injunctive relief and prohibited the state from restricting indoor services of places of worship under Tier 1 (Purple Tier/Most Restrictive).

California Department of Public Health officials immediately updated the state’s guidelines to reflect that the Purple Tier restricts indoor worship activities to 25 percent of capacity. The Imperial County Health Officer Order has also been updated, and as a protective measure against the spread of COVID, singing, chanting, shouting, and playing of wind instruments (any instrument played by mouth, such as a trumpet or clarinet) in religious services as well as in any public or private venue, both indoors and outdoors, is prohibited.

Dr. Stephen Munday, Imperial County Health Officer, said it is important church leaders not let their guard down with the court ruling.

“As more of the restrictions that have been put in place as a result of the COVID-19 pandemic are lifted, we must still be mindful of safety precautions that will continue us down the path of improvement,” stated Munday in a release issued on Sunday. “It is important that we not let our guard down and continue to practice the measures that have been proven to minimize the spread of the COVID-19 virus.”

Most churches have been providing streaming services to worshipers, which is convenient for some but nothing beats the social aspect of being at the church for Laura Goodsell, a Holtville business owner and lifelong churchgoer.

“Being part of a church family is really something special,” Goodsell said. “We hear a lot about the suicide rate and depression and that is what we are here for, to help people in their time of need.”

Goodsell was part of the 50 people who attended the St. Paul’s Lutheran service on Sunday and, as an insurance agent, said she was “cautiously excited” to see people in the building.

“For me, it has been horrible to see the empty church, even when we see the streaming service,” Goodsell said. “I was happy to be back and see people at a safe distance. Even if we were masked and sanitizing and socially distancing, it was still great to see people in the pews.”

“Over the weekend I asked the attendees, and overwhelmingly they were in favor of staying outside while we can,” said Edney, who is in his ninth year with El Centro Catholic. “I have been very impressed with our congregation as they think about all of the issues related to COVID. With the nice weather we are having now, people want to stay outside.”

Edney did say the first indoor Mass would likely be scheduled for Feb. 21 at Our Lady of Guadalupe in El Centro. He said a reservation system would be implemented for the Mass and about 250 members of the 4,200-strong congregation could be accommodated.

“It involves much more planning as we will have ushers take them to their seats, and we can have families sit together but will have to socially distance others,” Edney said.

At Our Lady of Guadalupe in Calexico, Father Jose Sosa said dealing with COVID and the death and destruction it has caused has been more difficult than attempting to hold Masses outdoors or online.

“At times, the outdoor Masses were difficult, and we’d have to deal with the wind or a little rain, but more difficult was seeing the people suffer and die due to this horrible pandemic,” said Sosa, who has been at OLGA in Calexico for about five years. “The real church is not the building, it is the people. Families have suffered and lost relatives, that has made the past year so hard.”

Sosa said Masses to celebrate weddings and quinceañeras have obviously slowed during the past year, and the ones that were held were outdoors. Friday’s ruling would open the church for celebrations to move indoors again, but with limited attendance.

“I think we would be allowed to have the celebratory Masses as long as we followed all the guidelines and had the limited capacity,” Sosa said. “People are happy to go inside but understandably they are hesitant as well.”

Previous
Another Holtville Farmers Market Back by Popular Demand