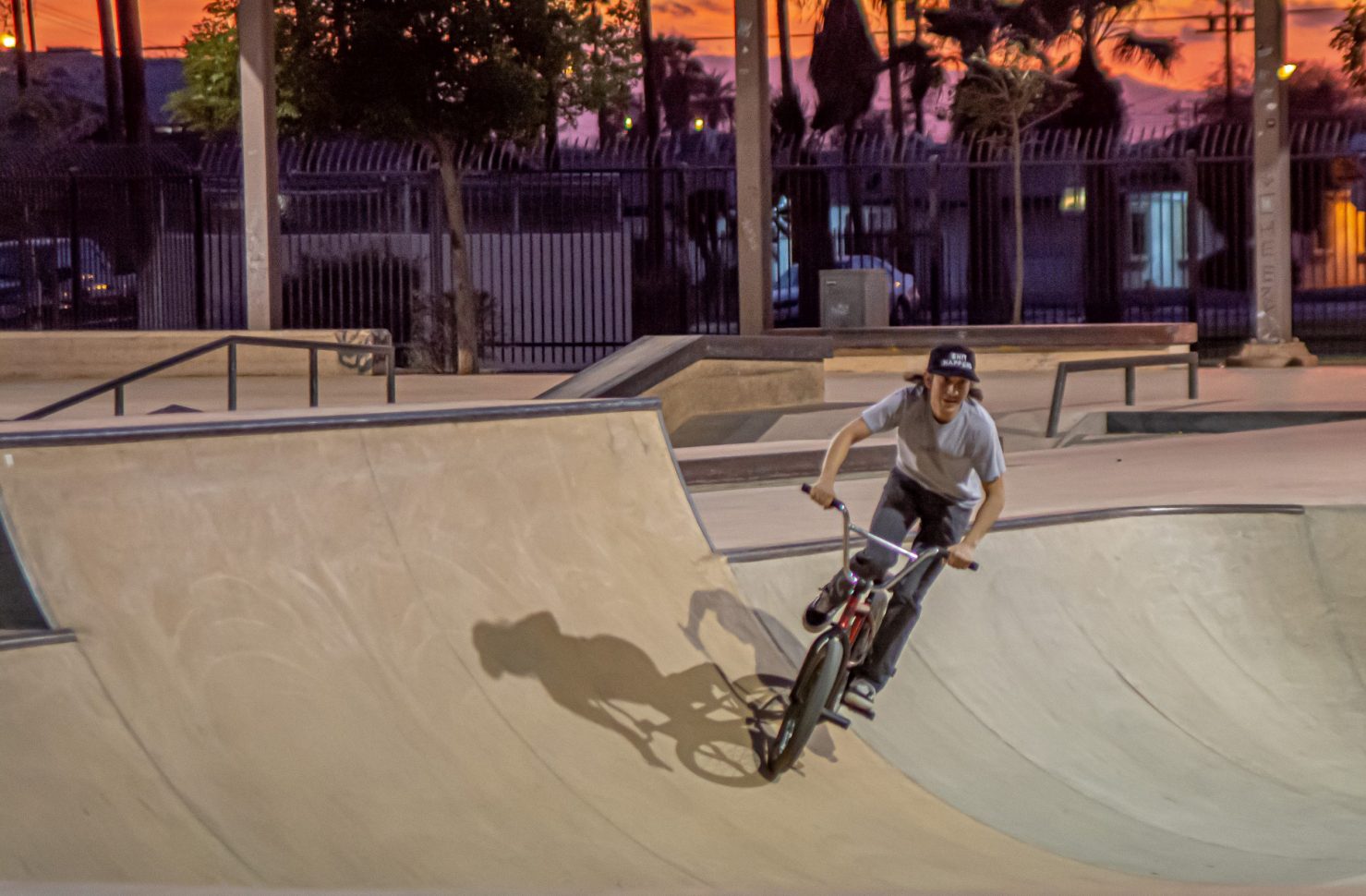 A teenage bicyclist runs the course at El Centro’s Sidewinder Skatepark on Monday evening, Feb. 15. This youth, like many who were in attendance on Feb. 15, were not wearing face masks despite a mandate by the city of El Centro that facial coverings must be worn at all times. City officials have already closed the park once in response to riders and skaters ignoring the mandate, and they are warning additional closures are imminent. | CAMILO GARCIA JR. PHOTO
Home
COVID-19
In COVID-19Regional News

El Centro Warns of Skatepark Closures If Masks Not Worn

The mishap prompted Josue to sit out much of his inaugural session at the skatepark, though he continued to wear a face mask to help safeguard himself against any potential exposure to COVID-19.

The mask also set Josue apart from the two dozen or so people who visited the park that afternoon. Most, if not all, could be observed without one, even though the city of El Centro has signage posted at the park’s entrance advising parkgoers that masks are required.

When told of the mask mandate and the skatepark’s previous temporary closure by the city because of patrons’ reported failure to comply, Josue said he was firmly in support of the city’s actions.

“It’s fine if the city closes it down if they’re not wearing their masks,” he said. “They should wear the masks.”

Unlike its other open-air parks, the city of El Centro is treating Sidewinder Skatepark like it’s one big concrete playground and is therefore requiring the use of masks, said Adriana Nava, Community Services director.

And unlike most of the city’s other open-air parks and playgrounds, a majority of the skatepark’s patrons have continuously rebuffed the requirement, she said.

“At other parks there has been way more adherence to wearing masks,” Nava said. “There’s a big difference at the skatepark.”

In response to that apparent defiance, the city temporarily closed Sidewinder Skatepark from Feb. 4 to Feb. 8. The closure had been preceded by an unscheduled visit Nava paid to the park on the evening of Feb. 3 to observe patrons’ mask-wearing habits.

That night, more than 100 kids crowded into the park, which appears to be attracting larger numbers amid the pandemic, Nava said. She approached just about every group onsite and discovered that a lot of the youths had a mask in their possession but were not wearing it.

Some responded that masks weren’t needed since parkgoers typically maintained an adequate distance from their fellow skateboarding or bicycling peers. Other kids, however, openly mocked the mask mandate and gave no indication that they would comply, Nava said.

Such steadfast refusal has now forced the city to monitor the situation more closely and occasionally dispatch police in response to citizens’ complaints about patrons not wearing masks. The park’s hours of operation have also been limited to 1 p.m. to 8 p.m. daily to lessen the load on city staff.

“Going into the skatepark to tell kids to wear facemasks is not a No. 1 priority,” Nava said. “The more we continue to do this the more we are going to close it.”

Because of the unpredictable nature of skateboarding and riding BMX, masks can prove beneficial in the event of a collision with another rider, Nava said.

Seventeen-year-old El Centro resident Pedro Morales said that he and his friends were under the impression that the park’s recent closure was prompted by an injury that a skateboarder had sustained on Feb. 3 and which required the services of an air ambulance.

Upon finding out that the closure was a result of many patrons’ refusal to wear masks, Pedro acknowledged that he, too, hardly ever wears a mask when visiting the park on a near daily basis.

In his case, the decision to not wear a mask is more of a matter of convenience than any desire to thumb his uncovered nose at the authorities.

“When I’m skating, it’s hard to breathe, and since I have glasses, they fog up,” Pedro said.

The pandemic is a serious matter for Pedro, who said he shares a household with his elderly grandmother. Yet, he said he didn’t think the skatepark posed a potentially grave risk to its patrons, especially not while people are zipping around or even when they remain stationary.

“There’s barely anyone sitting down in big groups,” Pedro said.

And though Pedro and his half dozen friends acknowledged they did have masks in their pockets, none bothered to put them on after being made aware of the mask mandate.

Aside from the mask mandate, the city has found it challenging to have park patrons abide by the park’s regulation requiring the use of helmets, as well, Nava said.

Enforcing both regulations is extremely difficult since the skatepark is an unsupervised facility. The city used to have a private security guard patrol the premises and the nearby Aquatic Center regularly, but the ongoing pandemic’s impact to the city’s finances forced the city to discontinue that service, Nava said.

Still, she said that she and other city officials would like to see patrons take their own initiative and abide by the posted rules so that they can continue to enjoy the $2.5 million, 35,000-square-foot facility, which itself is a sign that the city cares about the local skateboarding and BMX community.

Although, Nava acknowledged, it appears as though peer pressure may be limiting many youths’ interest in following the rules.

“Some of them need that extra nudge,” she said.

In the case of 22-year-old Columbus, Ohio, resident JR Hawkenz, a nudge most likely won’t suffice.

After a three-month cross-country RV excursion with his father, Hawkenz’s first day in California brought him to Sidewinder Skatepark on Feb. 12.

The lifelong skateboarder said he takes the virus seriously and has no problem masking up when venturing indoors at places frequented by the public. The skatepark, however, did not fill that bill for him.

“I think since we’re outside, it’s pretty pointless,” Hawkenz said. “It totally doesn’t make that much of a difference anyway.”