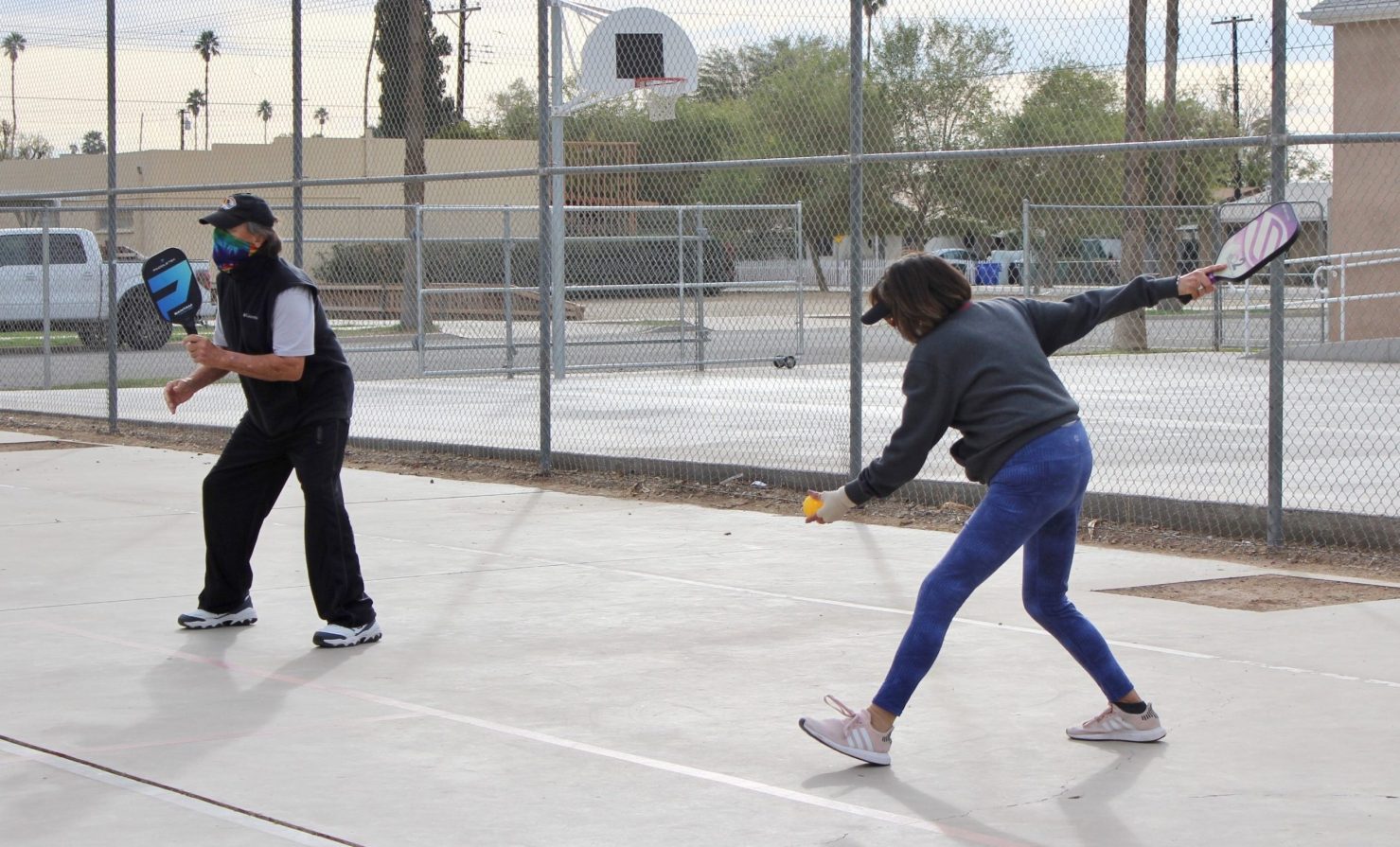 HOLTVILLE — If it’s 8 a.m. on a Wednesday or Saturday, the familiar sound of friendly banter and a ball hitting a paddle can be heard at Ralph Samaha Park.

Twice a week a group of senior citizens, mostly females but a few males occasionally, take to the court for their regular exercise of pickleball, a sport that combines aspects of tennis, table tennis, and badminton. It’s a sport that originated in the Pacific Northwest in 1965 and has gained popularity over the past decade.

“I love it. I didn’t think I would like it much because I’m not very athletic,” said 69-year-old Lola Telles, who took up the sport a year ago just prior to COVID shutting things down. “I could play all day. It’s really enjoyable, it’s social, it’s athletic, and it’s pretty competitive as well.”

The group of Holtville residents range in age from the 60s into their 70s. The game lends itself to the older generation due to the smaller court than tennis.

“I was always kind of interested in tennis but never really stuck to it,” said 70-year-old Margie Garcia, who rarely misses an opportunity to play Pickleball. “I didn’t do any sports back in high school, but Pickleball is easy to play and easy to understand.”

Pickleball, supposedly named after one of the originator’s dog, “Pickles,” is now played all over the world through community groups, physical education classes, YMCA, retirement communities, and more, according to pickleball.com. It is estimated that there are more than 2 million people playing pickleball in the United States.

The group of Holtville regulars were forced to stop their twice-weekly games during the height of COVID-19 but have since returned to the court using the necessary precautions.

“We had to stop for a while when it got really bad in the Valley,” Garcia said. “Now we go out and wear our masks, and we’re all real careful about the virus.”

The game uses a court similar to tennis, but scaled down; paddles similar to table tennis, but slightly larger; and a ball similar to a whiffle ball, but a little bit harder plastic. Scoring can only be done by the person/team serving and the game goes to 11, but the winner has to win by two points.

“We go out there and exercise and socialize and talk a little trash to each other, but it’s all in good fun and we all have a good laugh,” Telles said. “When you get old, it’s easy to sit on the couch and watch TV and not do anything, so I decided I needed to go do something and I’ve loved it from the very beginning.”

Garcia, who is the de facto leader of the pickleball regulars, said a pickleball “workshop” is scheduled for Wednesday, Feb. 24, at the courts in Holtville. A few higher-level players from Yuma will be coming to lead the 8 a.m. workshop.

During pre-COVID times, the classes were offered at the Recreation Department, but the instructors and class members have had to adapt to virtual classes during the pandemic.

“With the pandemic, we had to think how we could provide services and some type of exercise program for our residents,” said Norma Gerardo, recreation manager with the Calexico Recreation Department. “Our residents were avid participants of our services and classes here at the center and we knew this is how they would connect with others.”

The social aspect of the classes was a big draw for dedicated aerobics class member Rosita Lee, 75, and committed Zumba class participant Cristina Moreno, 56. With COVID, the classes moved online but that hasn’t dampened their spirit when it comes to exercise and health.

“It helps your soul and mind and you have so much energy after the class. It is so good for your health,” said Lee, who has been taking instructor Claudia Zamano’s classes for five years. “Taking the classes online of course isn’t the same, but we are so grateful to the department for providing that service. We have the same instructor, and she is so very special and that is what makes the difference.”

The classes are offered live and also saved to the department’s Facebook page for an on-demand library for those who can’t make it to the live classes. That feature has been beneficial for those wanting to take the class a second time or at a different point in their day.

“Zumba is really fun and gets me going. I’m not the type to just sit around. I’ve got to keep moving a lot and our instructor is the type that is always on the move also,” said Moreno, who has been a member of Erika Robledo’s Zumba class for almost three years. “Sometimes I can’t be with her during the live class, but I’m able to go to the page and do it when I have the time later in the day.”

Gerardo said the aerobics and Zumba classes were always some of the most attended, pre-COVID, because the participants can be social and get their exercise at the same time.

“Zumba has a lot of followers,” Gerardo said. “Seniors love to dance, and this is one of those exercises where it’s a workout and it’s exercise at the same time.”

Those wanting more information on the classes offered by the Calexico Recreation Department can visit www.calexicorecreation.org, or call 760-768-2176.