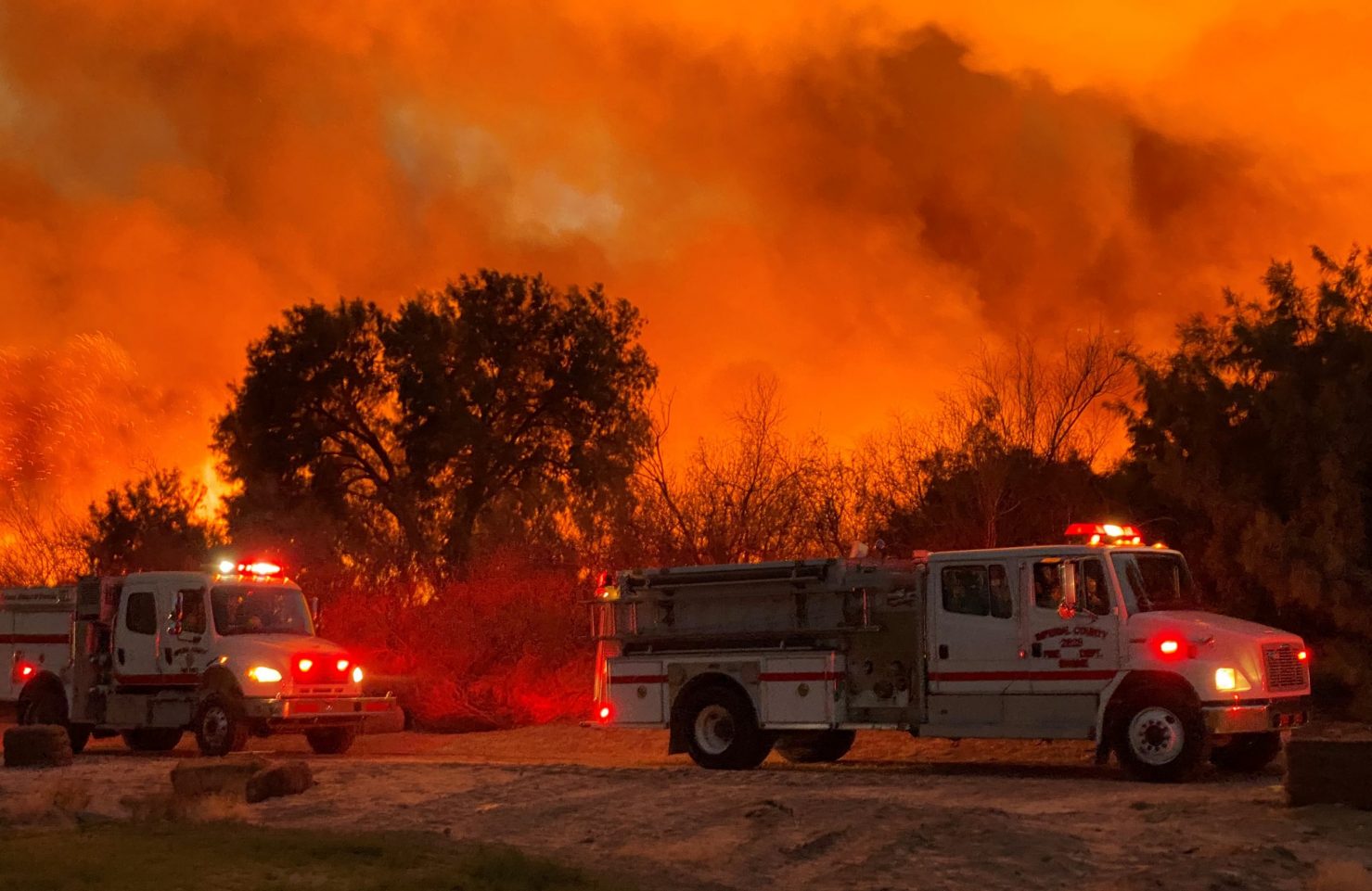 The sky above a four-alarm fire near Mandrapa Road several miles west of Calexico and north of Highway 98 are bright orange and red as flames whipped up by winds more than 25 mph burned heavy brush on Saturday afternoon and early evening, Feb. 20. Imperial County fire engines can be seen in the foreground. | CAMILO GARCIA JR. PHOTO
Home
Public Safety
In Public SafetyRegional News

CALEXICO — A wind-whipped, four-alarm brushfire that raged on the edge of the desert about eight miles west of Calexico was 98 percent contained and in the hands of the U.S. Bureau of Land Management on Sunday, Feb. 21., a county fire official said.

A fire of unknown origins started in the heavily vegetated area north of Highway 98 near the West Main Canal around 2:40 p.m. Saturday, Feb. 21, and quickly grew into a four-alarm fire involving some 11 fire agencies and as many as 40 crew members, the battalion chief said.

Imperial County Fire Department personnel from station Nos. 1, 2, and 3 made up the initial response, as winds gusting more than 25 mph quickly caused county fire officials to enact the mutual-aid system, Morales said, adding that within the first two-plus hours conditions escalated to a four-alarm blaze.

As walls of flame could be seen as high as 30 feet or more along areas of heavy brush near Mandrapa Road, the skies were either black with smoke or glowing bright orange and red from the growing fire shortly before 6 p.m. Saturday.

Although areas of the fire still burning on Sunday were mostly contained — the charred areas have created a natural boundary against the active areas, Morales said — the fire site managed by BLM is mostly inaccessible by vehicle and will require crews to walk to the fire zones with shovels and handheld implements.

One Imperial County fire crew remained at the scene on Sunday to assist BLM crews, who were helping to protect structures at a nearby farming operation, Morales added. The cause of the blaze is still under investigation.

No fire personnel were injured, no structures or property was damaged, Morales added.

(See map and photo gallery below.)

Next
Hundreds Line Up for Calexico’s First COVID Vaccination Clinic