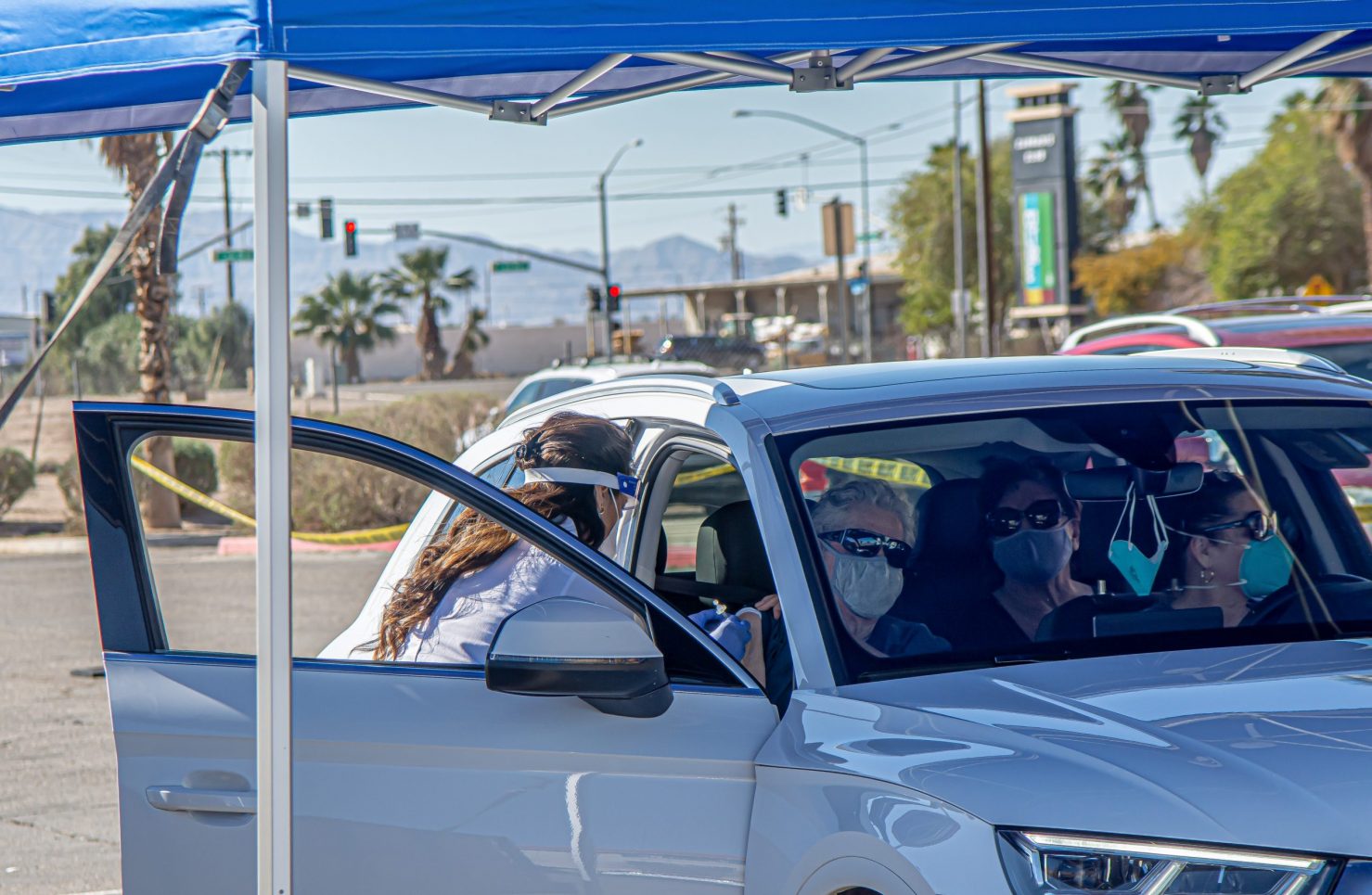 A staff member of Vo Neighborhood Medical Clinic administers the COVID-19 vaccine to a senior citizen during the first mass vaccination event in Calexico on Sunday, Feb. 21, in the parking lot of the Calexico 10 Theatres off Scaroni Road. Dr. Tien Vo’s clinic received nearly 1,000 doses of vaccine from the Imperial County Public Health Department and will continue to vaccinate his patients through Tuesday, Feb. 23, to use up all the doses, he said. | CAMILO GARCIA JR. PHOTO
Home
COVID-19
In COVID-19Regional News

CALEXICO — Hundreds of senior citizens received a COVID-19 vaccination on Sunday, Feb. 21, during a large-scale, drive-through clinic organized by Dr. Tien Vo and his Vo Neighborhood Medical Clinic in Calexico.

The vaccination clinic was made possible after Vo had received 965 doses of the Pfizer-BioNTech vaccine from the county Public Health Department on Friday, Feb. 19, he said.

The allocation from the county was expected to have arrived earlier in the week but was delayed by inclement weather in parts of the East Coast and in the South, he said.

Vo’s allocation came from a stockpile of the county’s second doses and was separate from the 1,000 first doses that were to be received and distributed last week, Imperial County Public Health Director Janette Angulo explained on Sunday.

The unexpected arrival of Vo’s Pfizer doses on Friday jolted the physician and his employees into action, and by Saturday they were able to register about 550 of his patients who are 65 years of age or older for Sunday’s vaccination clinic.

The large amount of vaccine that arrived also prompted Vo to host Sunday’s event in the parking lot of the Calexico 10 Theatres on Scaroni Road, which provided easy access for participants and a considerable amount of space to set up operations.

“This is the only way we can get it out quickly to people,” Vo said.

On top of the hundreds of seniors who were successfully vaccinated on Sunday, Vo said he expected vaccinations to continue Monday, Feb. 22, and possibly the following day at his medical center on Cole Boulevard to use up all off the allocation he received Friday from the county.

On Wednesday, Feb. 24, an allocation of 600 doses of the Moderna vaccine is scheduled to arrive for Vo and will be evenly distributed among his three clinics, with 200 doses each going to his offices in Calexico, El Centro, and Brawley, he said.

Plans call for vaccination clinics to be set up to administer 150 doses of the Moderna vaccines at each respective office starting that day, with each site’s remaining 50 doses to be administered through Vo’s mobile clinic to seniors within the cities.

Sunday’s vaccination clinic was supposed to have gotten underway at 9 a.m. but was started about an hour earlier to accommodate the line of cars that had started forming about 7 a.m., Vo said.

Calexico resident Evangelina Rodriguez said that even though her appointment was set up for noon, she was allowed to receive the vaccine a few hours in advance after having driven to the site ahead of time to observe how the clinic would operate and the volunteers on site urged her to get in line.

The 78-year-old said she lives alone in the Calexico Senior Apartments, hasn’t been venturing out in public all that much during the pandemic and limiting her social interaction to her immediate family.

Still, Rodriguez said getting the vaccination was a relief, and that it was the first time she had attempted to register to receive a COVID-19 vaccine. Like the hundreds of others who participated in Sunday’s clinic, Rodriguez had been contacted by Vo’s staff to ask whether she would like to register for the event.

Participants in Sunday’s event were required to wait at least 15 minutes in their parked vehicles after receiving the shot so that they could be monitored for any serious side effects.

“I felt a little queasy at first, but it went away quickly,” Rodriguez said in Spanish.

Heber resident Carlos Romo Ramos said he had previously attempted to register to receive the vaccine from other local healthcare providers but was not successful until Vo’s staff called him to notify him of Sunday’s event.

Romo said he is aware of how his type 2 diabetes, high blood pressure and past heart problems places him in danger of serious illness or death if he contracts COVID-19. His vaccination on Sunday helped ease those concerns.

Sunday’s mass vaccination event also drew the assistance of the Calexico Fire Department, various community-based organizations, and the Heffernan Memorial Healthcare District, which was handing out bags of personal protective equipment and hand sanitizer to participants as they left the premises.

The healthcare district has been in constant communication with the Public Health Department and local healthcare providers to determine how it can assist COVID-19 recovery efforts.

Heffernan is currently considering the purchase of two specialized freezers to store COVID-19 vaccine but is awaiting direction from the county regarding how the freezers might best be put to use, said Tony Pimentel, Heffernan spokesperson, who attended the vaccination event.

Vo said he recently was able to acquire a subzero freezer that can store more than 20,000 doses of the Pfizer-BioNTech vaccine and is amenable to storing other healthcare providers’ doses in it, as well.